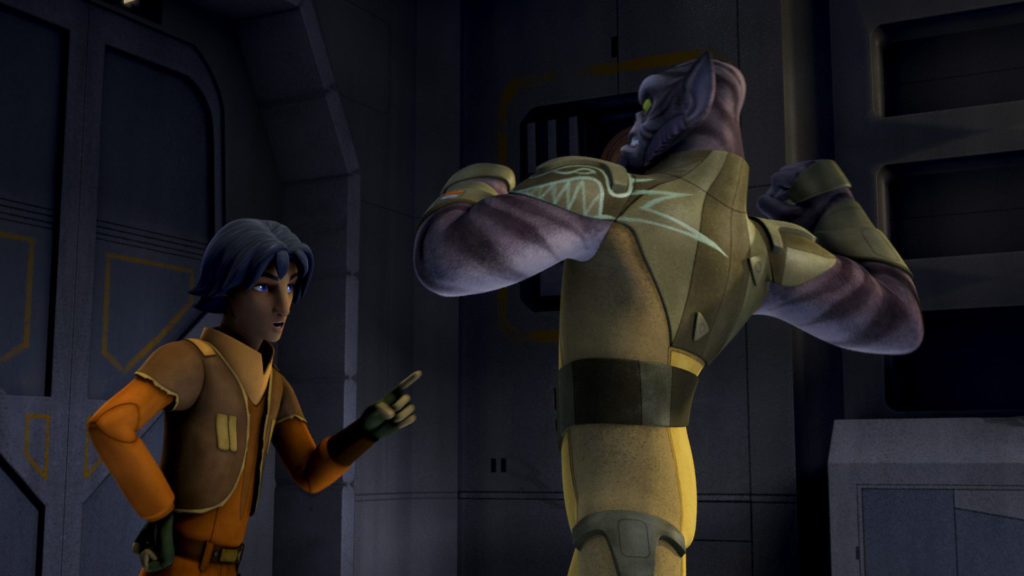 Ezra tries lifting a bowl with the Force, concentrating, the bowl starts to lift slowly. Elated, Ezra let’s out a cheer only to be shown by Chopper that he was lifting it for him. Hijinks ensue as Ezra chases Chopper around the ship until they end up near Sabine’s room, who is spray painting. Ezra tries to hit on her but she brushes him off and Ezra continues after Chopper into his and Zeb’s room.

Zeb warns Ezra not to wake him or he’ll kill him, but Chopper accidentally sends a bolt at Zeb. He gets shocked, causing laughter from Chopper and Ezra. An angry Zeb stalks to them and Ezra blames Chopper but Zeb doesn’t care. He tells him to get out but Ezra stays and goes up to his bunk, only for it to crush Zeb, leading Zeb to chase Ezra around the ship. Sabine sees that Chopper took the bolts out of Ezra’s bunk and looks around their room, getting an idea.

Hera, angry at Zeb and Ezra for destroying her ship, sends them to the market on Lothal to get supplies and emphasizes they cannot return until they bring back a meiloorun fruit. Ezra briefly speaks to a vendor, Sumar, who recognizes him before spotting Imperials. The Imperial officer approaches Sumar about his farm but he refuses selling it to the Empire. Zeb appears with the rest of the supplies and asks Ezra if he’s found the fruit. When he says he hasn’t Zeb gives him half the supplies, causing him to tell Zeb again that he saved his life. Annoyed, Zeb corners Ezra until he knocks into a box, revealing the rare fruit. They ask the vendor for the fruit but it’s already sold to the Empire. 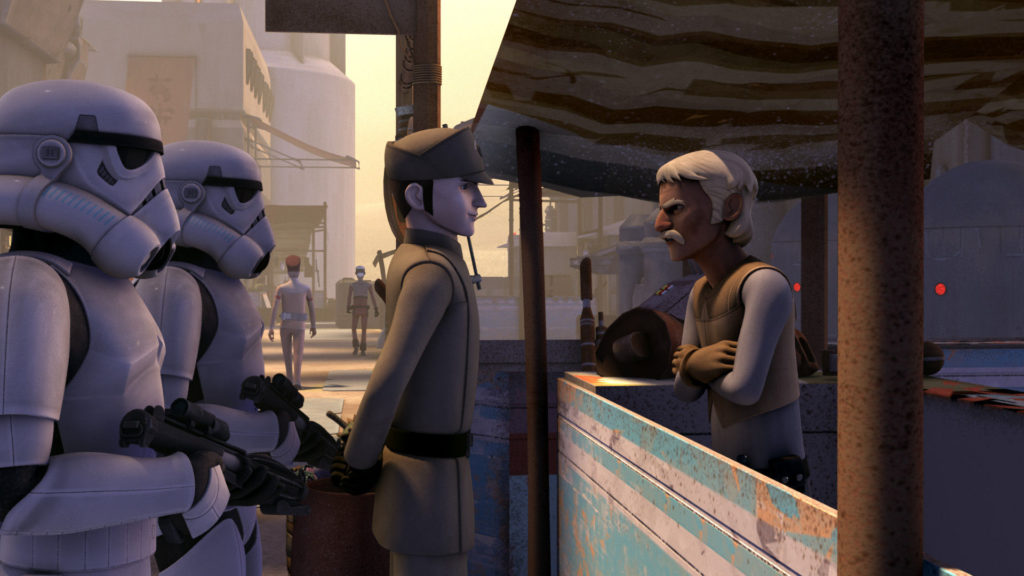 Ezra and Zeb track the fruit to the loading dock the Empire is using. Ezra tries to use the Force to get a fruit but fails, causing him to go after it in person, only to get caught. Zeb throws boxes to distract the Imperials and they make a run for it. Forced to split up, Zeb get cornered by a Tie fighter and two stormtroopers. Zeb hijacks the Tie fighter and blows up the Imperial’s supplies around him. He rescues Ezra from being chased on the rooftops by troopers, only if Ezra agrees that this makes them even, and they escape in the Tie fighter away from the city.

Zeb reports to Kanan that they stole a Tie fighter and an angry Kanan tells them to meet up at a rendezvous point that neither Zeb or Ezra knows where it is. The Imperial officer approaches the farmer Sumar and he tells him again that he’s not interested in selling his farm. The Imperial’s blow up their home and arrest them. The smoke rising from the farm catches Ezra’s attention and they investigate. Noticing Imperial transporters heading away from the farm, they pursue them. Zeb drops Ezra onto the transports to let Ezra free the prisoners. When he’s unable to reach the switch to free the prisoners, he uses the Force to open it, letting them jump to safety.

Zeb provides air support while Ezra dodges troopers on the top of the transports. He finds the box of fruit again and uses some to throw at the troopers themselves, knocking them out or off the transports. Ezra gets cornered by one trooper who calls him out that it was all over fruit, which he agrees. He sticks a wrench in the gun turret he’s hiding by, causing it to explode and knock off the trooper. Ezra is yet again surrounded but Zeb comes in and rescues Ezra and they escape. 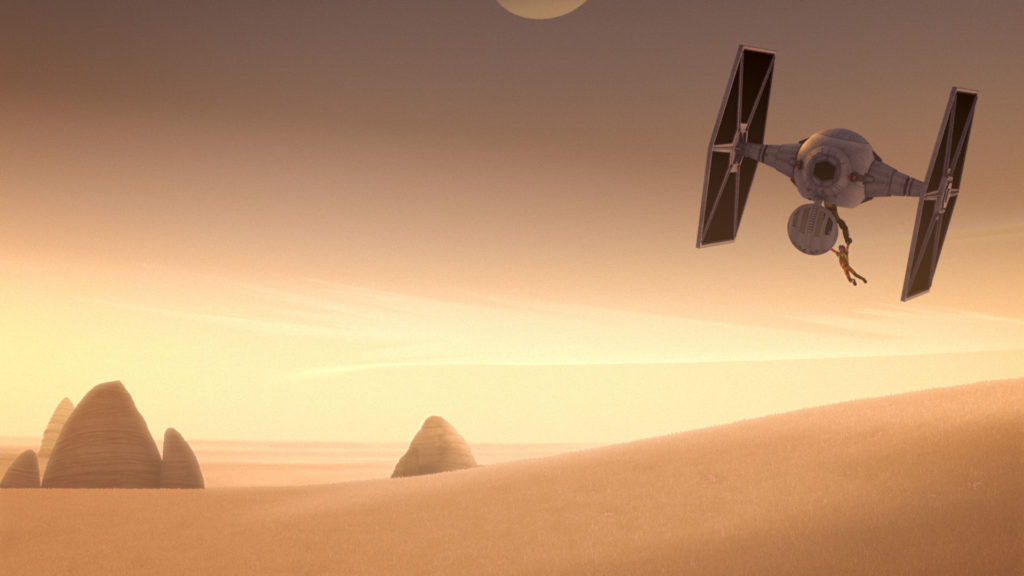 Zeb offers Ezra the Tie fighter’s helmet, noting that he collects them only to be disappointed that Ezra says he has one already. But Ezra happily takes it when seeing Zeb’s disappointment and they return to their ship. Hera and Kanan meet them outside where they admit they crashed the Tie fighter on purpose, which makes Kanan happy. This causes laughter to break out between Zeb and Ezra as they fool around, running into Sabine who shows them what she drew. A picture of Zeb being crushed by Ezra’s bunk. Realizing it was Chopper’s fault from the picture, they chase Chopper before crashing into their supplies, yet again. Kanan sighs but Ezra and Zeb smile at one another, having grown even closer. 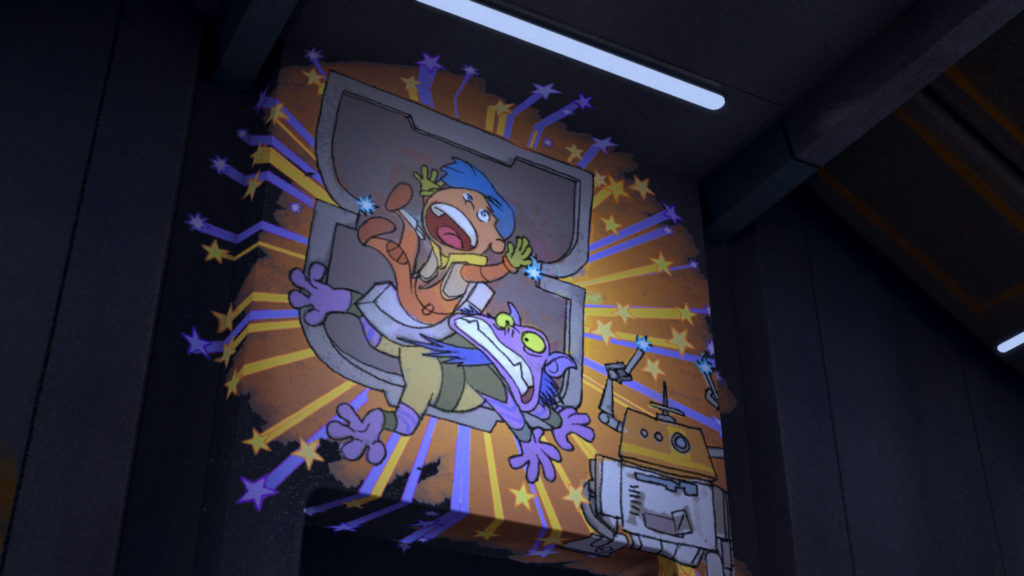 This was the first non-mission episode and I enjoyed it for the most part. They continued to have action despite silliness and simplicity of the plot. Both Zeb and Ezra act like children but mostly as brothers, constantly bickering, which makes their chemistry great. I find it a little strange that they continue to return to Lothal. At this point you would think the Empire would be on more alert due to all their sightings there and you would think the crew would go to other ports to keep a low profile but I guess it gives the audience a point of reference. So until next time…