You may know Rebecca Woolf because of her popular “mommy blog,” Girl’s Gone Child. Or maybe you’ve read her book, Rockabye: From Wild to Child. Or maybe you’re just meeting her now, not as the mother of four extremely cool kids whose wardrobes merit serious envy, but as the writer and director of Pans, a passion project film she’s in the midst of crowdfunding on Kickstarter. She generously gave me a chunk of her time for a conversation about the film via FaceTime, which according to the Kickstarter prize list has a value of $1000!

Here’s a quick overview of the film from the Kickstarter page:

Set in a quiet beach town in grunge-saturated 1994, Pans puts a feminist twist on the classic, Peter Pan. Wynne Darling, 15, is physically broken, socially displaced, and emotionally torn between her newly separated parents.

With nowhere to turn, Wynne hooks up with a new crowd led by bad boy skateboarder, Pete, and his riot grrrl sister, Belle. Surrounded by “lost boys” and with the help of found friendship, Wynne learns what it means to grow up of her own free will…

Here’s one of the things I’m most excited about, also from the Kickstarter page:

As well as casting an inclusive and female-led cast, we are currently crewing up with the goal to employ as many women on set as possible. 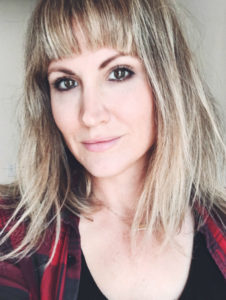 It was also the year Kurt Cobain committed suicide, which was a very major moment for me in terms of mourning heroes.

Also, that year for me musically was the most influential.

LL: You say on the Kickstarter page, “Thematically, Pans is a deeply personal story about sexual assault and the isolation and shame that keeps many young women and girls from sharing their stories and outing their assailants.” Why did you choose to include sexual assault in your story?

RW: In the first act, Wynne experiences three very traumatic events. One of them is her parents announcing their divorce, (and another is that) she physically breaks her arm. Then, while she’s upset about the divorce she attends a Nirvana-themed party, where she goes dressed as her favorite Nirvana song, which is “All Apologies.” She has a shirt that says “I’m sorry” in all these different languages. She has a few Zimas and is later assaulted at the party and then blamed for it by the girlfriend of the boy who assaults her. She was “drunk,” she was “the one who brought him into the room…” etc. And so, in the course of 24 hours Wynne goes from having a family and a community to having nobody… She doesn’t feel like she belongs in her world anymore, so she seeks out a new one.

I believe it’s important to have conversations about rape and the culture that supports it in a way that is nuanced and real. When I was a teenager, “rape” wasn’t a word we EVER used. “Assault” was just something boys did who had too much to drink. I spent many years burying events because I didn’t feel I had any choice. As a teenager, we weren’t empowering each other to speak out against assault, we were silencing ourselves.

I felt like it was important for (Wynne’s) growth as a character to get to a point where she can say, “This is not OK,” because I needed to get to a place as the writer to be able to say the same thing.

The story is really about a girl who stops apologizing for things that aren’t her fault and says: “I’m not sorry. This is what’s happened to me, and this is how I can empower myself through my art and my voice in order to come out the other end of it.”

LL: You’ve said that the music of 1994 was really important to you. Is part of the budget earmarked for licensing the songs you love?

RW: Yes! Yes. Our dream soundtrack is a DREAM soundtrack. Obviously we’re trying to get a hold of some major songs of that time period, specifically Nirvana, which is really difficult to get. Some Bikini Kill… we have a Soul Asylum song we’d love to include; there’s a “Runaway Train” a capella scene— all sorts of great musical moments.

And 1994! Like every album came out that year– (Hole’s) Live Through This; Green Day’s Dookie came out that year… the Weezer blue album, Portishead’s Dummy… SO MUCH good stuff was happening musically at that time.