Home » TV & Streaming » The Punisher is Foreboding in this Dramatic Mini Teaser for Daredevil!

The Punisher is Foreboding in this Dramatic Mini Teaser for Daredevil!

The Punisher, as played by Jon Bernthal, is featured in a brand new mini teaser out this morning for Daredevil, Season Two, the upcoming Marvel series out of Netflix. 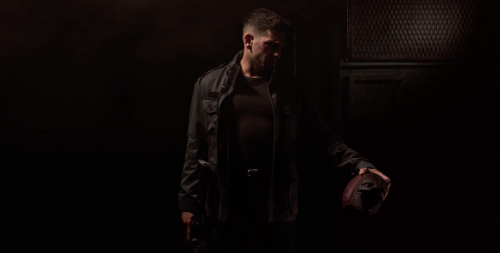 Though brief, it’s a very foreboding and dramatic bit of footage that shows Frank Castle in his all black outfit slowly approaching the camera, a gun in one hand and Daredevil’s mask palmed in the other hand. It gives you a sense of just how much danger Daredevil is in with this guy.

It’s worth noting that we still have not seen the classic white Punisher skull on his shirt. Most likely, they will treat Punisher’s costume like they did Daredevil’s in the first season and we won’t see the white skull on his shirt until the end, or close to it.

With another trailer coming out in just two short days, 2/25/16, which will presumably focus more on Elektra, it’s likely that we’ll see an Elektra teaser to get us even more psyched for that trailer’s release. Elektra is played by Elodie Yung and outside of her saying, “Hello Matthew,” we’ve barely seen or heard anything about her character or her role in the series. They seem to be keeping her under wraps for now.