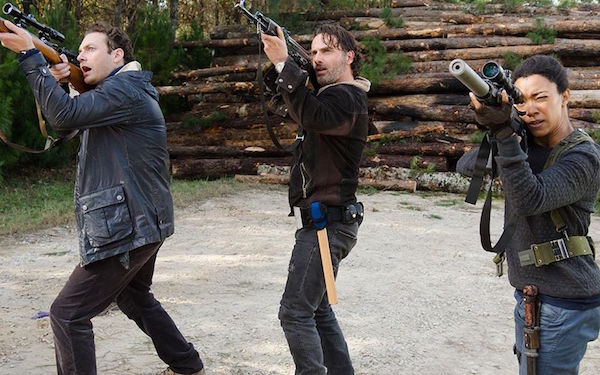 Has this happened to you? You’re at a party or out with friends and you’re talking about The Walking Dead with a pal, when someone overhears you? Maybe they just heard the word “Rick” or “walker” but you can see the smirk crawl across their face like a slug trail. They lean in, black glee in their eyes, and say smugly, “Oh, are you guys still watching The Walking Dead? I was out a long time ago.” Then, despite your obvious continued interest in TWD, they’ll launch into their well-rehearsed rap about why the show is boring/frustrating/dumb/sucks/blah/blah/blah.

This is especially vile if they’ve caught you complaining about a bad episode. Because then they get to look at you with empathetic eyes and say, in a voice exhausted from having been right for so long, “I know… I get it. That’s why I stopped watching.” It’s awful. And it’s going to happen to you A LOT this week. Because The Walking Dead shat all the beds in world last night in it’s long anticipated Negan revealing season finale and now we’re never going to hear the end of it.

So many spoilers are coming at you. So many.

The Season Six finale was called, “Last Day On Earth”. We know this because they said it a bunch in the episode to remind us. It began with Rick and the Alexandria group loading a sick (miscarrying?) Maggie into the RV so they could get her to the doctor at the Hilltop. Slowly… and that really is the best way to describe every part of this episode… our series regulars gathered one by one to tell Rick that they were coming too. He’d then very wisely tell them no because they’d be more help defending Alexandria in his absence. Then they’d tell him they were coming again and then he’d agree. This took a surprisingly long time to repeat several times, mainly because the writers wanted us guessing which beloved character was gonna get their pumpkin smashed by Negan’s beloved barbed wire bat, Lucille. Then, because Jesus is merciful, they finally piled into the RV and sped off. 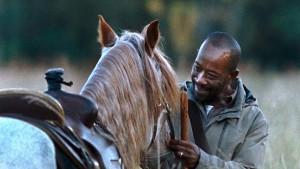 Meanwhile, Morgan, who had gone after Carol when she abandoned Alexandria for some fucking reason, found a horse. He petted it and then rode that horse to find Carol cowering in a corner of a building. What followed was another slow conversation about him wanting her to return and her not wanting to come back. To be honest, I don’t know what the fuck happened to Carol’s personality. I get that she was scared by the events on the attack on the Saviors and by being taken hostage later, but WTF? This is kill the sick and burn the bodies, teach the kids how to knife stuff, shoot little girls in the back of the head Carol we’re talking about here. She started this series scared and became tough. Now she’s scared again? What? 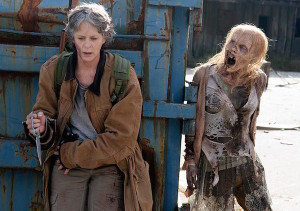 Well in this episode she reveals to Morgan that her issue is that if you get too close to people then you might have to kill for them. This is something she has not had a problem doing in many seasons, so for her to now have some retro-active psychic schism about the risk of loving people in the apocalypse is pointless. It’s the worst kind of “reset” and completely out of character for Carol. The only salient thing that happens in this mostly vapid B-story is, after being attacked by a Savior who was hunting her, then subsequently saved by horsey Morgan, the two of them encounter two dudes in body armor who are also riding horses. And one has a spear. They seem kind, but more on that next season I guess? Anyway, who cares. This is the Negan episode right? So let’s get back to the RV! 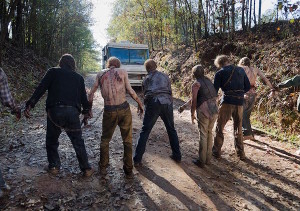 Buckle up, my friends! Then take a nap, because what transpires over this hour and half yawner is pretty frustrating. The group keeps driving up on roadblocks set up by the Saviors. They either talk to the Saviors, who offer cryptic threats or… get this… just back up and go the other way. Thrilling. Everywhere they go… roadblock. One time it’s a bunch of walkers chained together across the road. One time it’s a big pile of burning logs. The effect here is meant to show the group that Negan’s noose is tightening around their necks, a point driven ham-fistedly home when the Saviors button one roadblock by hanging some dude we’ve never met (or whom I can’t remember anyway) from a 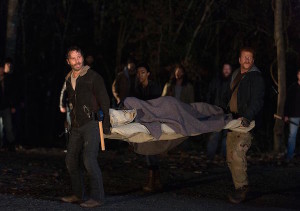 bridge. Finally the Alexandrians give Eugene (who is awesome in this ep) the keys to drive the RV as a suicidal diversion while they throw Maggie on a stretcher and light out at night on foot. Once in the woods, they find themselves surrounded by more Saviors who have all been trained to whistle creepily and, boom, they are FINALLY on their knees in front of Negan. Eugene is there too, along with Rosita, Glenn and Daryl who were captured by Dwight last episode. It takes about an hour to get us to this point. So still a half hour left right? Now the good stuff! Not so much. 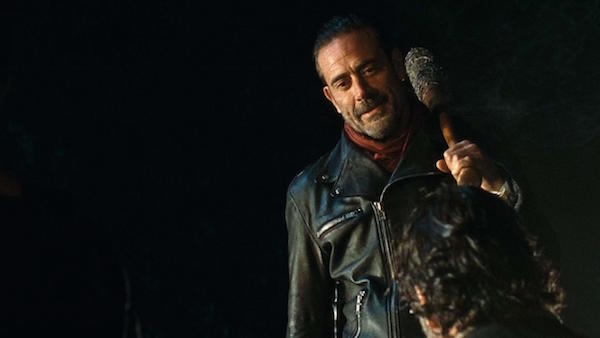 Negan appears dressed like a butch Freddy Mercury and sporting the barbed wire baseball bat we’ve all been hoping for. Here it comes. One of our dear ones will meet their demise, then sad music and slow-mo crying because the world isn’t fair. Cut to Chris Hardwick in a somber studio, trying super hard to look sad as he tees up the morbid couch chat with this season’s victim. Except no. Instead we get a very, very long monologue from Jeffery Dean Morgan (whose Negan is fine, for all the build up). It’s pretty standard 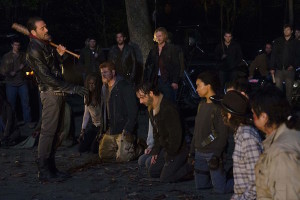 warlord fare though. Your stuff is my stuff. I’m the boss. I own you. Do what I say or I’ll kill you. Nothing we haven’t heard before from the likes of the Governor and other baddies on the show. It’s the standard dystopian pantomime and though everyone in it is acting super hard, it still feels like we’re just going through the motions. But that’s not even the worst part of course. The worst part, and the part which will have the Internet enraged today, is that we don’t even get our Gallagher moment. Because when Negan finally deploys Lucille, we don’t know who he smashed. We hear the splats. We know they “took it like a champ”. But can’t see the identity of the murdered party. Fart.

So that’s the show. Hell, that’s the season. And what a bummer it is. I think this will be a turning point for The Walking Dead. I won’t call it “jumping the shark”, because that’s not quite it. That term is for shows that desperately try to inject interest in a dying series by resorting to stunts of one kind or another. There’s a different thing happening here.

They created in The Walking Dead, characters who literally had nowhere to go. So their physical journeys were never the point. Instead the focus was meant to be on deeper questions. In a world where you can’t escape the nightmare, how do you go on living? What accommodations does one have to make in their hearts, minds and souls to survive? And why survive at all? Why live? Until now the answers to those questions have been fairly satisfying. You live for each other. You live because love is the opposite of despair. You go on because the default setting of the human spirit is LIFE. It’s a beautiful lesson and one, despite the haters, this show has taught us well on many occasions. But now we may have reached the moment when we’ve learned all we can learn from these characters. That probably happened during Rick’s insane solo defense of Alexandria (Episode 9, “No Way Out”) from the horde that morphed into a catharsis for the citizens of that walled town. They finally felt that urge to live and it was glorious and inspiring. But then the Hilltop, the attack on the Saviors and this terrible cliffhanger. The story is cycling back on itself and truly feels like it doesn’t have anything more to offer. This isn’t jumping a shark. This is “Pulling a Negan” (I own that). And so, like that smirking guy from the party I am at long last, out.

But make no mistake. I’m not out because The Walking Dead is bad. I’m out because this terrific show has done everything it set out to do and more. They may have more episodes lined up. And many of them may be excellent. But I don’t need to see the cycle continue. I’m quitting while the quittin’ is good. And I promise not to talk about it at parties.