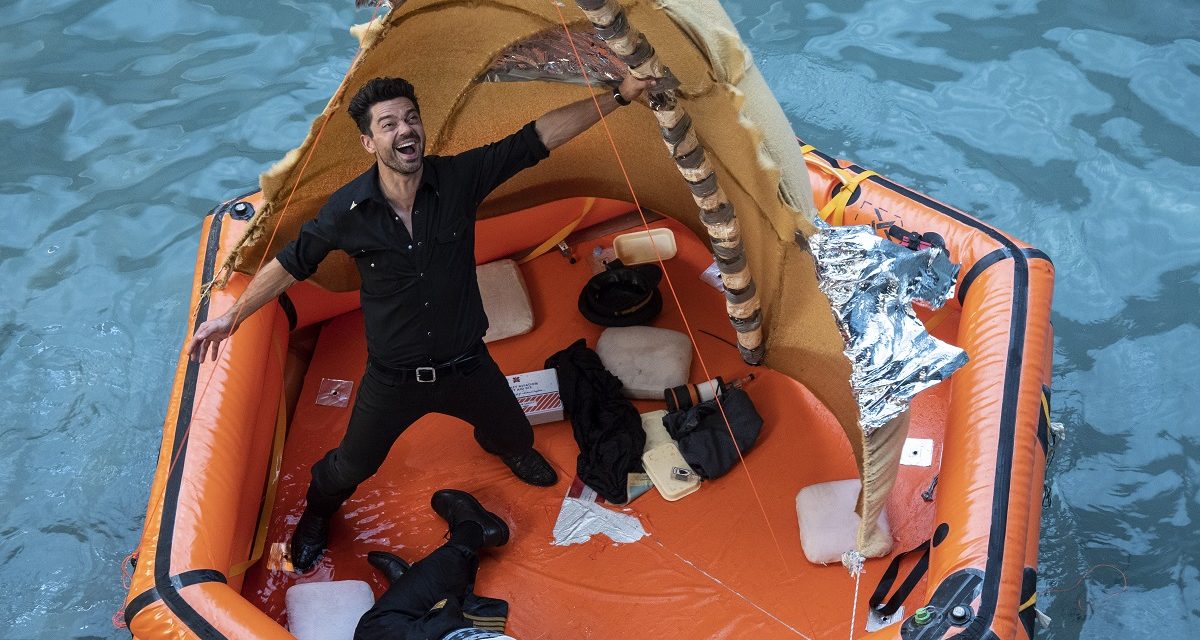 DISCLAIMER: This Preacher recap of “Search and Rescue” contains more spoilers than the number of times Tulip has effectively kept the male ego in check. Our favorite bad*** laughs in the face of the patriarchy. You’ve been warned. Proceed with caution.

Welcome back, members of the Grail! Preacher just aired its best episode of the season, in my humble opinion. The puzzle pieces shifted into place and the plot was catapulted to new heights. The end is nigh, and we got a glimpse of where our characters could potentially finish their respective journeys. MVP of the episode goes to Tulip, as per usual. Her befriending Jesus Christ and enlisting him in the perilous mission of freeing a vampire was pure Tulip O’Hare. Not to mention, the Most Gruesome Moment Award goes to Cassidy brutally slaying Frankie Toscani via shoving a rifle up his arse. Oy vey. Talk about nightmare fuel.

Alright, ready to delve into “Search and Rescue?” Just be sure to never question God’s plan. Especially when he’s donning his latex dog costume and jamming out to jazz.

We open with Herr Starr (Pip Torrens) wining and dining with God (Mark Harelik). Starr is lamenting of Jesse’s escape from Masada. He never got to carve a vagina into Jesse’s head! His desire for revenge remains unfulfilled. God urges Starr to be patient – his perfect plan is in motion. He inquires of his son – not Jesus Christ, but Humperdoo. Starr assures the Lord that Humperdoo is safe and sound. However, we know that the Grail lost Humperdoo and are currently searching the world over for him. 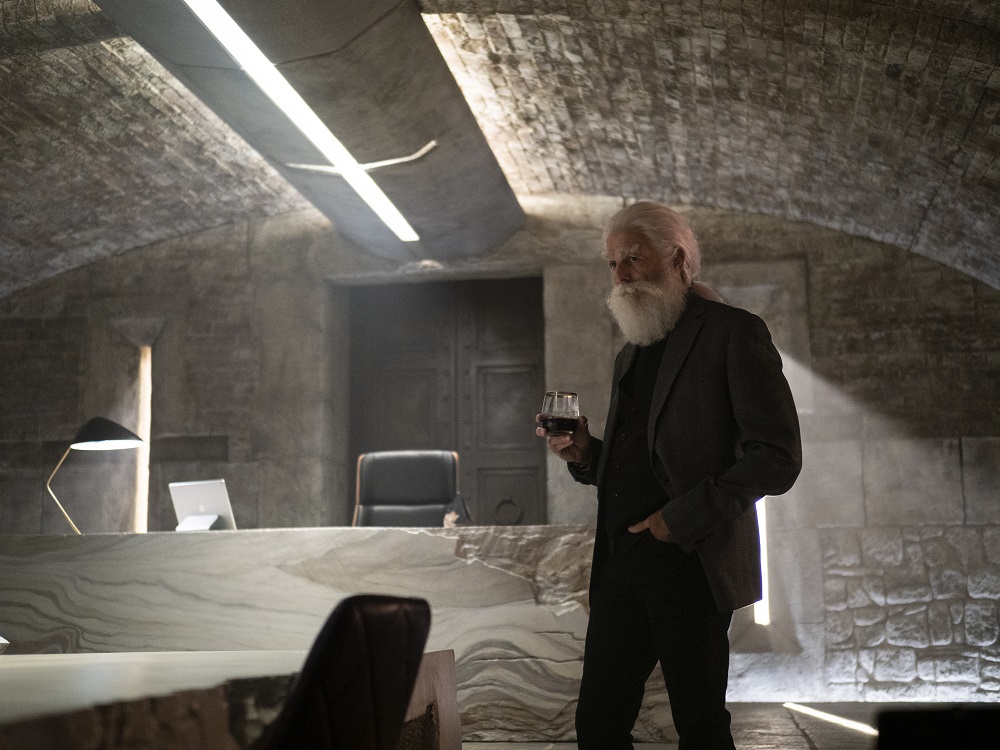 Meanwhile, Jesse (Dominic Cooper) is currently en route to the bottom of the ocean in a nosediving aircraft. We see God sitting across from him thoroughly enjoying the ride to the depths. Thankfully, Jesse and his pilot friend (Ditch Davey) both survive the plan crash and clamber into an inflatable life raft. How convenient. It would appear the Almighty is at work here. However, the pair are now stranded in the middle of the ocean with nary a supply or food in sight.

Later, we see Cassidy (Joseph Gilgun) being carted off to Bensonhurst while donning a face mask. No, not the self-care type masks, but one meant to muzzle him should he succumb to his innate vampire urges. Frankie Toscani (Lachy Hulme) is leading the charge with a swarm of Grail soldiers flanking them. However, we know that Cass is cradling an angel feather from his Archangel cellmate in the palm of his hand. Angel feathers hold a lot of power. In fact, Cassidy uses said feather to pick his locks, and incapacitate the Grail soldiers. Then, Cassidy squares off against Frankie in a duel to the death. The pair are locked in fisticuffs, but Cassidy reigns victorious in the end. He slaughters Frankie by shoving an assault rifle up the latter’s bum…until the tip breaks through his cranium. Ew. Nightmare fuel.

Next, Jesse and the pilot are swiftly removing water from their life raft amid a downpour of rain. Jesse refuses to give in, citing that God is testing him. Bring it on! Our preacher will never falter in the face of adversity. The pilot is less enthusiastic regarding their survival odds, so Jesse utilizes Genesis to instill some positive thinking in the former. 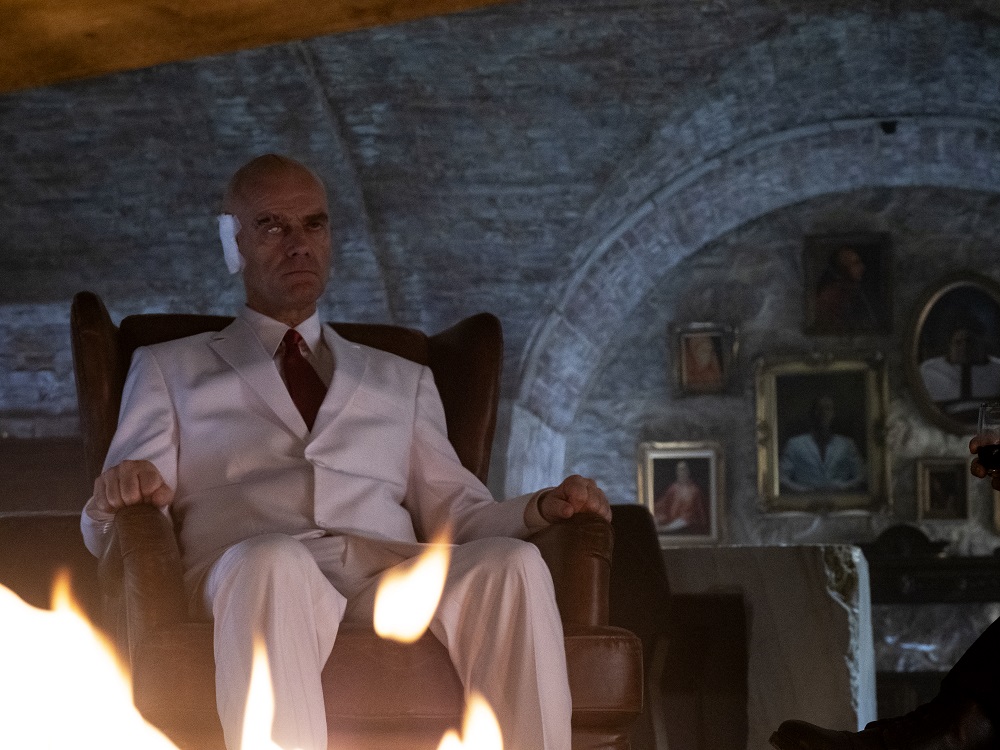 Meanwhile, Cassidy runs in to Tulip (Ruth Negga) while the latter is about to exit an elevator. However, she immediately goes into hiding when Lara Featherstone (Julie Ann Emery) brandishes a gun at Cassidy’s head. She grills him regarding Tulip’s whereabouts, but Cass feigns ignorance. Featherstone carts Cassidy back to his prison cell and parks herself outside the perimeter with her soldiers, hellbent on ensuring Cassidy’s perpetual entrapment.

Next, Tulip is ushered by Hoover Two (Aleks Mikic) to the Emissary Suite, wherein she’s tasked with acting as valet to either the emissary from Heaven or Hell. We see Hitler (Noah Taylor) arriving at Masada for a summit to discuss the impending 2020 apocalypse. But she’s not valeting Hitler. She’ll be serving the Messiah himself…Jesus Christ (Tyson Ritter). No, not Humperdoo. The real thing, y’all. And he’s beautiful.

Then, we see Cassidy’s Archangel cellmate (David Field) talking the former’s ear off. Cassidy is on cloud nine after discovering that Tulip broke into Masada to free him. She does care! However, he refuses to admit that he’s in love with her…you know, Tulip being the girlfriend of his best mate and all. 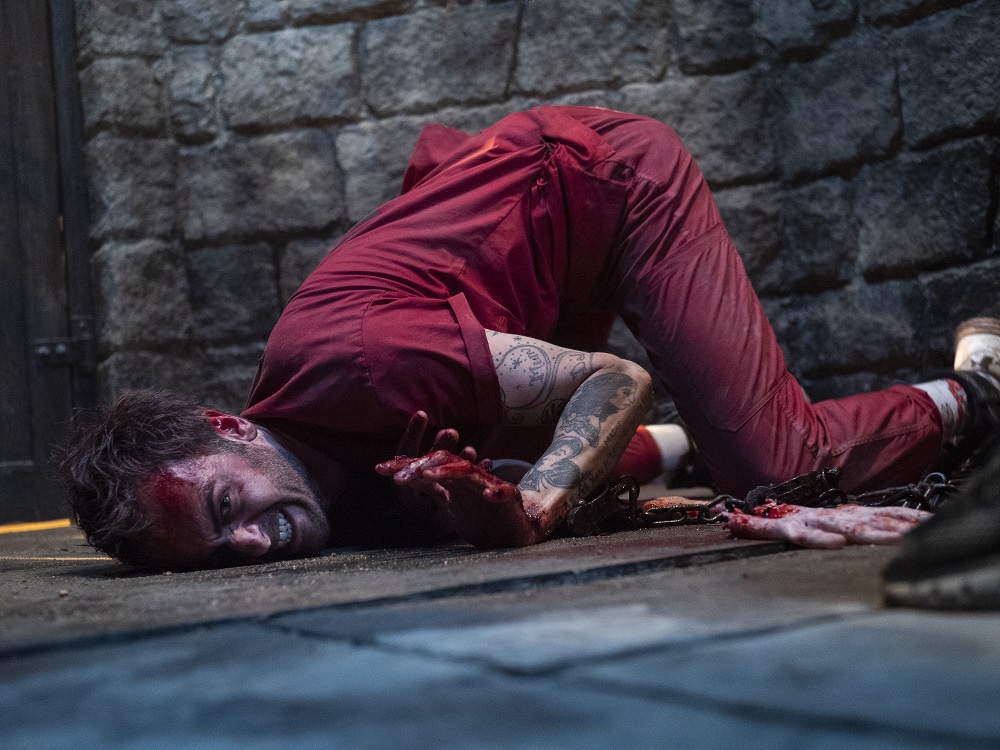 Later, Jesse and the pilot survived the turbulent night on the waters. However, our pilot friend is still bereft of pants, and his legs are suffering from severe sun damage. Jesse swiftly conceals his legs with a jacket. He also uses Genesis to switch off the pilot’s incessant positivity. Jesse urges the pilot to believe in him – believe that he can get them out of this sticky situation.

Meanwhile, Tulip introduces herself as Marnie to the Son of God. She’s utterly enthralled by the Messiah. Suddenly, Starr enters the Emissary Suite and Tulip quickly goes into hiding. Starr tells Jesus that Masada’s full services are at his disposal. Before taking his leave, Starr spots Tulip and recognizes her. However, Tulip insists that Starr probably spotted her in the local cafeteria. After successfully evading capture at the hands of Starr, Jesus reveals that he can sense Tulip is in trouble. 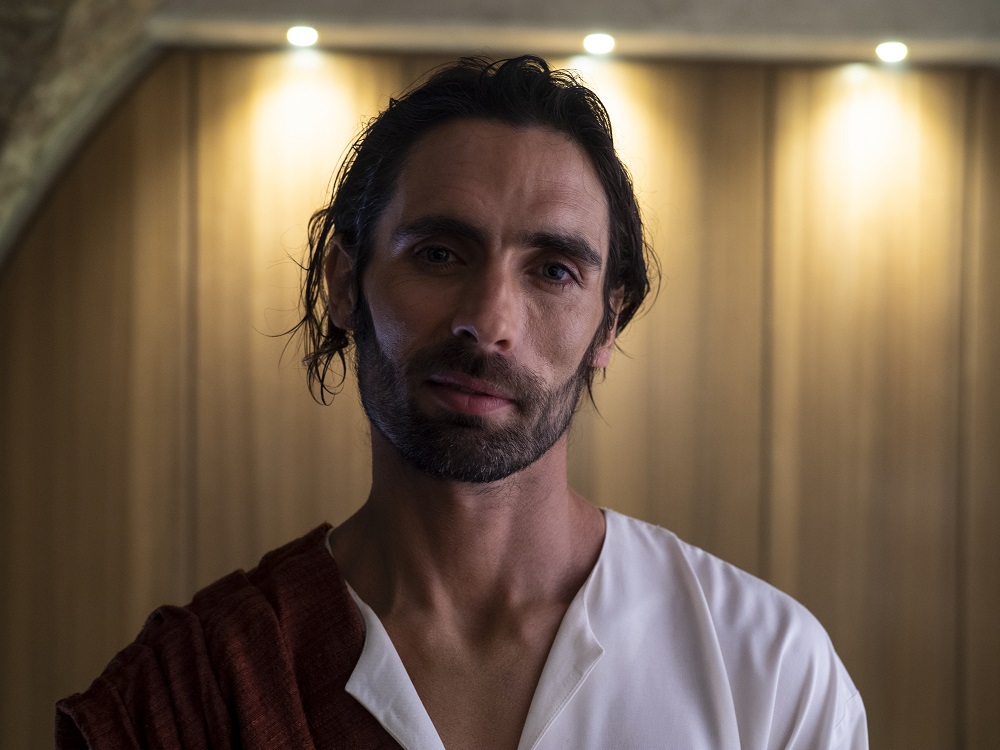 Next, we see Hoover Two preparing the meeting room for the upcoming summit between Jesus and Hitler. Starr arrives to peruse the meeting agenda on his desk, and Hoover Two asks for permission to speak freely. Hoover Two reminds Starr that he is “sitting pretty” as the Allfather, with the power of the world at his fingertips. Starr should brush off his “languidness” and forge ahead with that knowledge. He is a powerful man, and Hoover Two is merely there to remind him of such. What a good lackey!

Now, Jesse is fastening a makeshift sail to the raft in the hopes that the winds will carry them to a nearby shore. The pilot wakes from a brief sleep. Unfortunately, his arm was left dangling in the waters, and he withdraws it from said waters to find his hand was chewed off by a shark. However, Jesse used Genesis earlier to turn off the pilot’s ability to feel pain, so naturally he didn’t even notice his hand becoming shark food. Jesse utilizes a tourniquet to staunch the bleeding, but it may be too late. Suddenly, the makeshift sail flies away, leaving the pair with no means of quick travel. God truly is testing our preacher.

Meanwhile, Jesus wants in on Tulip’s prison break mission. He attempts to bypass Featherstone, but even the latter’s seemingly immovable loyalty won’t grant the Messiah access to the dungeons. Jesus Christ returns to the Emissary Suite empty handed, and Tulip reveals her plan to free Cassidy.

Then, Cassidy is trying to wrestle free of his wrist shackles. After some considerable time at the task, he finds success. He leaps up the wall and sinks his teeth into the Archangel’s neck, sucking the heavenly figure dry of blood. However, the Archangel waltzes through the cell entrance below unscathed. Cassidy clambers aboard his back and the angel flies them toward the heavens to freedom. Yay!

Later, Jesse and the pilot are sitting in the raft, at the mercy of the brutal sun and shark-infested waters around them. The pilot knows he’s at the end of his tether. He rambles off his life regrets. Jesse utilizes Genesis in an effort to force the pilot to live, but to no avail. The pilot perishes from loss of blood. 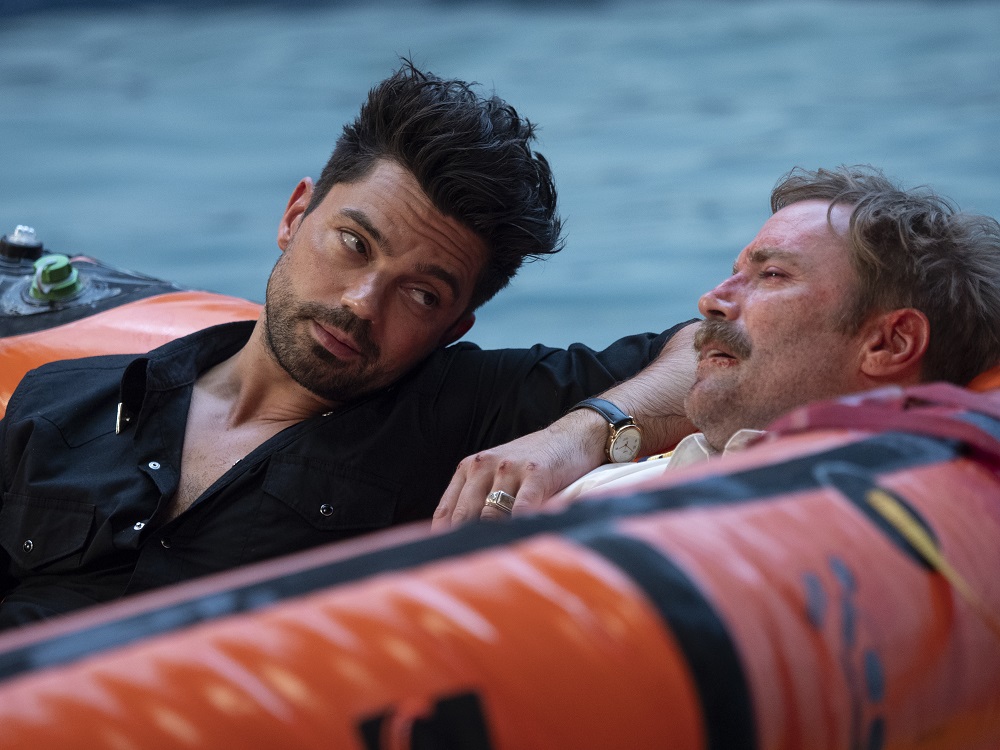 Meanwhile, Jesus and Tulip attempt another go at the dungeons. Tulip, her back turned, falls prostrate before the Messiah, and the approaching Grail soldiers do the same. However, Featherstone rouses the soldiers to their feet, as they have work to do. Tulip asks a soldier why Featherstone is so adamant they keep working, and he reveals that a prisoner has escaped. Tulip and Jesus enter Cassidy’s former cell to find it bereft of the vampire and Archangel. Jesus inquires of Tulip’s next move, and she reveals that she plans on finding Cassidy in the outside world. The Messiah asks if he can join her. Aw, I like this pairing. I want a Preacher spin-off chronicling the escapades of Tulip, Cassidy the vampire and Jesus Christ. Now.

Next, Jesse wraps up the pilot’s body and deposits it in the ocean…where it is promptly consumed by a shark. However, he notices that the shores of Australia are close at hand. In fact, just a stone’s throw away. Success?

Then, we see Hitler breaking in to a room housing a Humperdoo replicate. He urges Humperdoo to don his dancing shoes. The Fuhrer parks himself at a baby grand piano adjacent to Humperdoo’s place on stage and commences plunking out a tune. Hitler accompanying a Humperdoo dance routine. Preacher really does have it all!

Meanwhile, The Saint of Killers (Graham McTavish) and Eugene (Ian Colletti) are standing on the shores of the Gulf of Mexico. SoK can sense that Jesse is in Australia, since the latter has recently used Genesis. So, how are they gonna get to the the Land Down Under? SoK blows on his gun, which emanates smoke with a red hot hue. He aims the barrel at the ground and fires a hole into the earth. We see the duo crawling out of said hole onto the shores of Australia. Well, that’s a fun way to travel! Through the center of the Earth, no less! Our pair continues on to the city proper, trudging past the same life raft that Jesse was previously aboard. 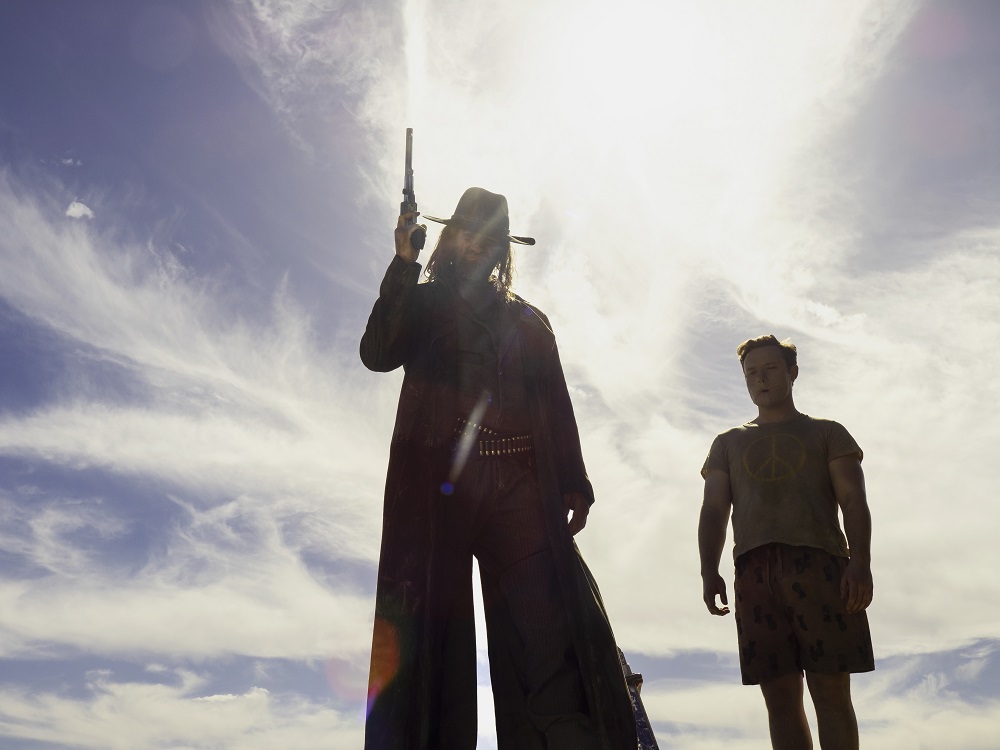 Now, we still have roughly have a season left to absorb all things Preacher. I can’t wait to see how it all ends. We’re edging closer and closer to Jesse’s impending meeting with the rock formation in Australia, and how he supposedly perishes. Well, if that part we saw in the premiere is true. We’ll see how Tulip and Cassidy couple up, and hopefully more antics with Jesus Christ. Never thought I’d type that sentence in my life. But, this is Preacher, where foreskin ears and threats of vagina carvings are a thing. Never a dull moment.

Do you think Tulip will find Cassidy in the next episode? Will she allow Jesus to join her adventures? Can the Grail pinpoint the real Humperdoo? Will the Saint of Killers track down Jesse sooner than we think? Join me next week as I continue to recap Preacher, here on Geek Girl Authority.

Preacher airs Sundays at 10pm on your AMC affiliate.