Welcome, former citizens of Annville! Too soon? Anyway, Preacher Season 2 kicked things off tonight with a car chase worthy of Mad Max: Fury Road. Our favorite Texan preacher is continuing his search for God, who was reported as MIA in the Season 1 finale. Then, you know, Annville blew up. Accompanied by ex-girlfriend/maybe current girlfriend Tulip and vampire mate Cassidy, Jesse Custer finally met his match in the cowboy from Hell. Referred to as The Saint of Killers, he was dispatched from Hell last season with one mission: to kill Jesse. Now, Jesse’s Genesis power apparently works on everyone but SOK (I hereby decree the cowboy as such). So, that sucks.

Watching the season premiere felt like reuniting with an old friend – inviting, comforting and a great reminder of why I fell in love with Preacher in the first place. From the action sequences to the sporadic humor peppered in between, this show really has something for everyone. So, time to rev up the engine and get “On The Road.” Friendly reminder that spoilers shoot with frightening accuracy a la The Saint of Killers, so be careful. 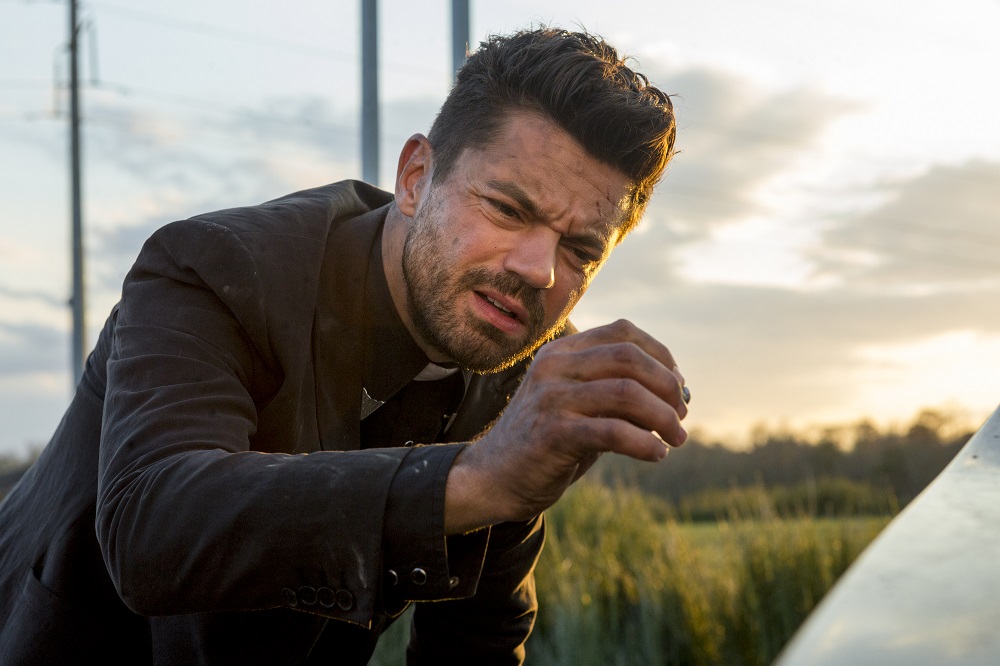 We open with our gang on the road: Tulip (Ruth Negga) is driving, while Jesse (Dominic Cooper) sits in the passenger seat and reluctantly listens to Cassidy (Joseph Gilgun) tell a tale of male circumcisions. Why circumcisions? Because Cassidy, that’s why. Our heroes are en route to meet with a family friend of Jesse’s who might be able to aid them in their search for The Almighty. Suddenly, “Come On Eileen” blares on the radio and the trio listens with reticence. A cop car zips up behind them, urging them to pull over. Instead, Tulip hits the gas and a beautiful car chase begins. The trio begins to sing the song full out as they evade a swarm of police cars on their tail. I never thought I’d hear this song in an action scene, but it’s strangely fitting.

Suddenly, the car runs out of gas. Policemen catch up with our gang, forcing Jesse and Tulip out of the car. Cassidy trails behind them, umbrella in hand to shade him from the sun. The Sergeant (Robert Catrini) coerces Cassidy to drop the umbrella, while the latter pleads with him not to. Vampire + sun = flames. It’s simple math. A swarm of officers jump Cassidy to handcuff him, and they pull the umbrella away. We hear the sun scorching Cassidy’s skin as he dives into a police car for shelter.

Then, Jesse decides to use his Genesis superpowers against the unsuspecting policemen. He forces the Sergeant to mace his crown jewels (ouch), two of them to hold hands and another to sing the alma mater of Texas. Jesse is taking great pleasure out of this. Tulip, on the other hand, is not a fan of Genesis. 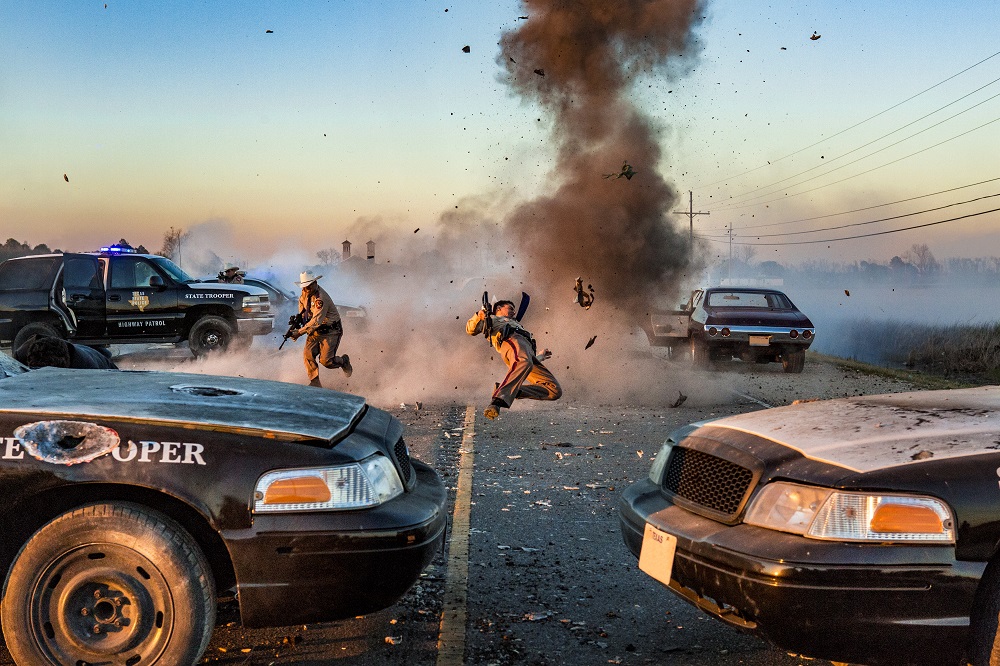 Suddenly, gun shots are fired. We see policemen getting riddled with bullets – bullets powerful enough to savagely decapitate heads. Yes, heads. Jesse and Tulip take cover while this happens, trying to concoct an escape plan. Meanwhile, Cassidy is still hiding in the police car, but when bullets start piercing the facade of said car sunlight begins pouring in. He immediately throws himself under the car for protection.

Then, we see a policeman lying in a pool of blood, his intestines fanning out around him. In other words, do not consume food while watching Preacher, unless you want said food to make a surprise return. Anyway, Jesse comes up with the grand idea of siphoning gas with the intestines so they can get away. Jesse saves poor Cassidy from almost losing his shelter when the car he’s underneath begins to roll away. After Tulip siphons gas for her car, the trio makes a break for it. The slew of police cars behind them explode, and in their wake Jesse sees a mysterious figure drawing closer. 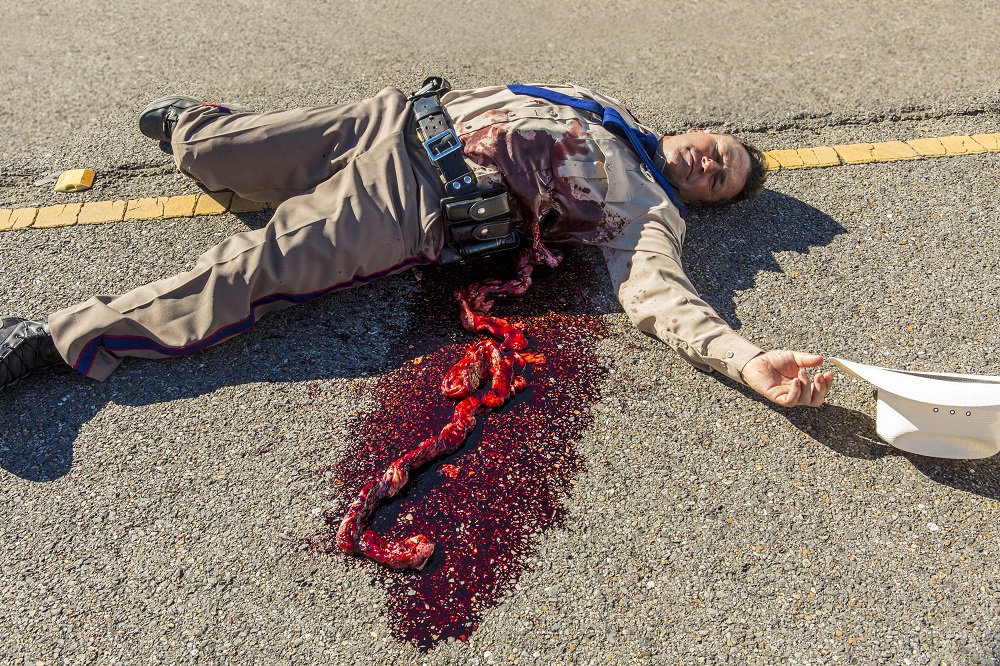 Well, in case you ever need to siphon gas in a pinch… (also, sorry)

Later, they stop at a gas station. Tulip starts drinking everything she can get her hands on to wash the taste of intestines out of her mouth. Hot sauce, chocolate milk, you name it. Jesse uses Genesis again on the gas station owner, convincing the latter they were never there. 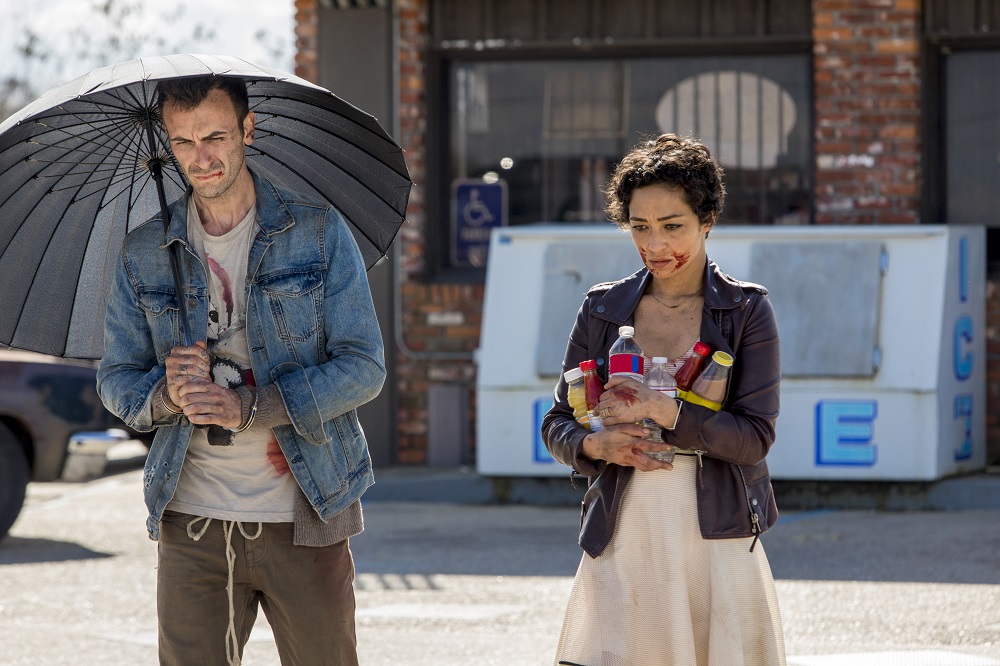 Copious amounts of hot sauce and chocolate milk are all anyone needs in life.

After the gang leaves, the gas station owner is visited by none other than The Saint of Killers (Graham McTavish) – the cowboy from Hell. He asks the man if he knew where Jesse was going. Since the proprietor was influenced by Genesis into ignorance, he claims to truly know nothing of “the preacher.” As a reward, SOK rips his tongue out. Guys, the human tongue is very large, in case you were curious about that sort of thing. 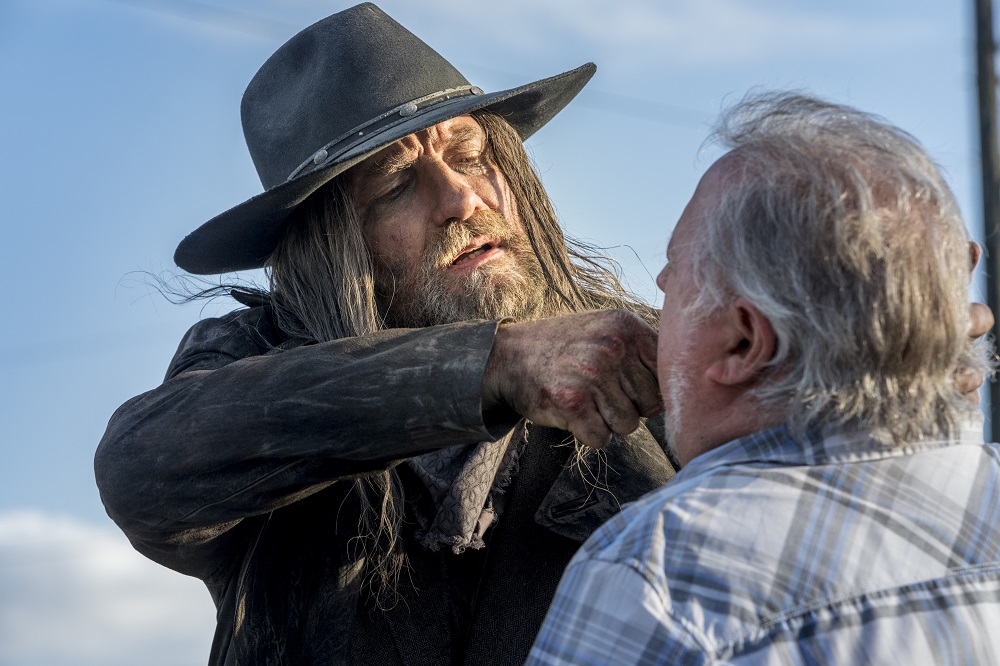 Later, they arrive at Jesse’s friend’s house, Mike (Glenn Morshower). Jesse claims that Mike is a “scholar” when it comes to biblical studies. Tulip and Cassidy wait in the car while Jesse heads inside. We see Cassidy gaze dreamily at Tulip from afar. Aw, he’s still crushing on her hard. Then, Cassidy confesses that he thinks they should tell Jesse about their rendezvous. Tulip, on the other hand, is well aware that such a declaration would not end well for either of them.

Meanwhile, the duo hears a wailing sound emanating from inside the garage. They discover a young woman named Ashleigh (Abbie Gayle) inside a cage. Just as they’re about to release her, Jesse returns with Mike in tow. Mike ushers them inside, demanding they leave Ashleigh be. He then explains that his parishioners approach him when they have habits in need of the boot, whether it be alcohol, smoking or social media. Mike curates a process meant to help them break those bad habits. This includes locking people in a cage. You know, totally normal rehab stuff. 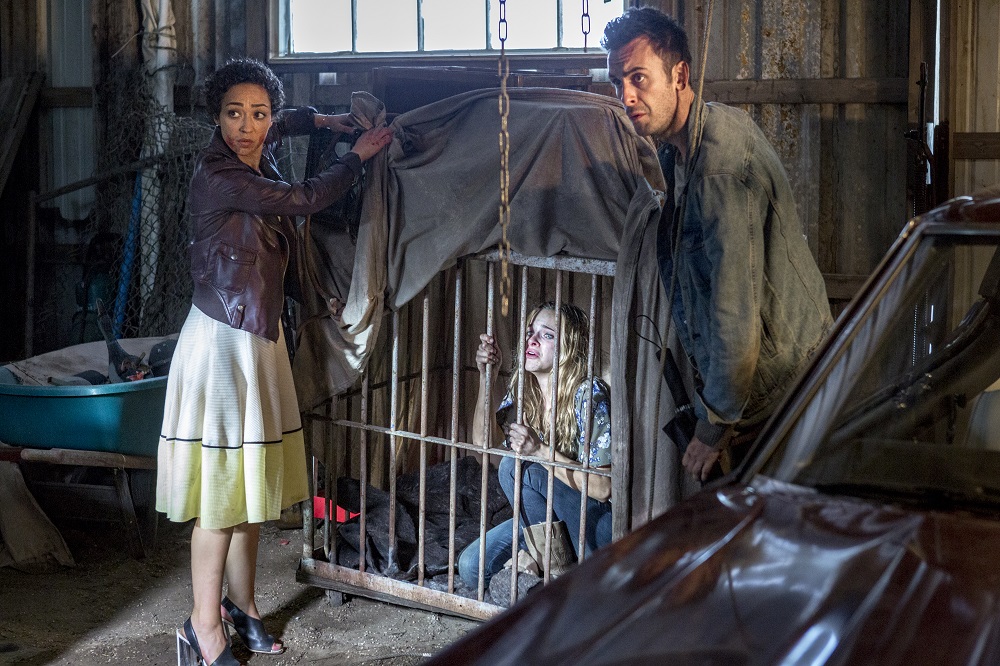 Then, Jesse explains their mission to find God to Mike. Mike believes that The Almighty is missing, but isn’t sure he can be found. Their host offers the trio a bed to sleep in for the night – just the one bed. Cassidy monologues about growing up in Ireland and how they would all cram into one bed. He became oblivious to sexy time sounds from his parents. In short, our favorite Irish vampire gives Tulip and Jesse his coital blessing. Well, that’s a mood killer right there.

Later the next day, our gang hits the road to chase a new lead thanks to Mike. According to him, a woman named Tammy who runs a strip club saw God with her own eyes, at said club. Interesting. 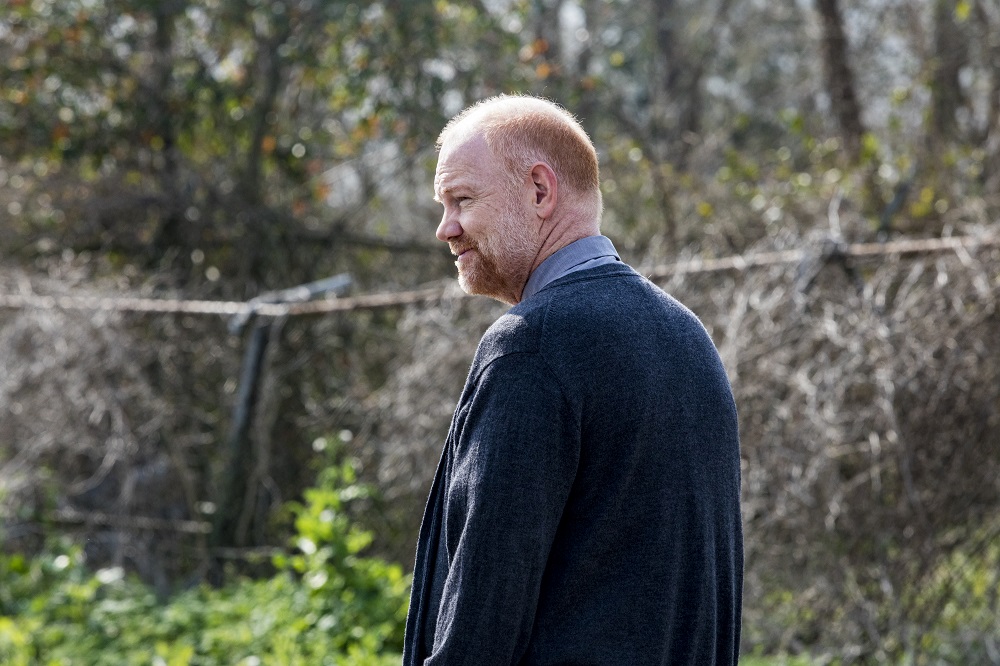 Meanwhile, SOK shows up at Mike’s house. However, Mike is prepared for SOK’s arrival. He pours two glasses of whiskey and sits with a knife discreetly hidden at his side, prepared for anything. SOK drills him regarding Jesse’s whereabouts. Mike pointedly refuses. Our family friend of the Custers knows who SOK is. In an effort to prevent himself from giving Jesse up, Mike takes his own life.

Then, the gang pulls up at She She’s Club. “God came here?” Tulip asks incredulously. My thoughts exactly. They head inside. Cassidy is immediately distracted by the scantily clad women roaming about the club. Jesse and Tulip finally meet Tammy (Jeanette O’Connor). Jesse grills her about claim to have seen God. Tammy laughs it off, telling them about her time with Mike and how he would think she’s crazy. Jesse and Tulip notice a line of photos on the wall and wonder if God fell in love with one of the women working there. Tammy continues to keep mum on the subject. Jesse debates with Tulip whether he should use Genesis. She emphasizes that it’s a “last resort” method, while Jesse insists that he’s not receiving the answers he needs, therefore a last resort is required. 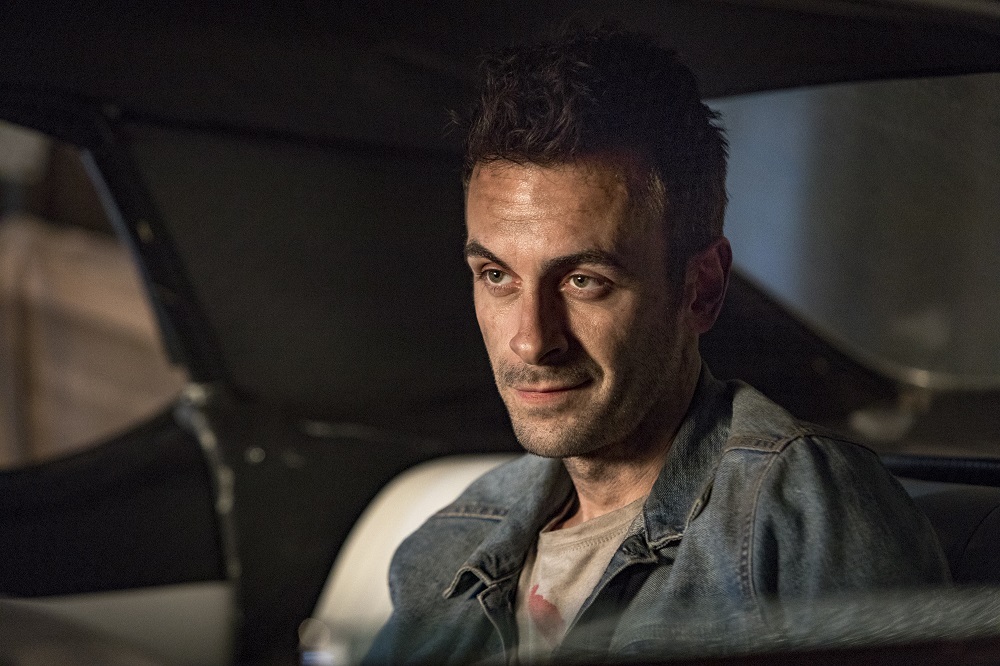 Meanwhile, Cassidy is seen on camera with a dancer in a private room. He tries to touch her. The bouncer is immediately notified and sent his way. We see Cassidy and the bouncer begin to fight. Tammy tries to call the bouncer into her office to kick out Jesse and Tulip. She tells them that if they found God, he would stare through them “like glass,” and he certainly wouldn’t answer their questions. After a bout of arguing, a bullet pierces Tammy in the chest. Where did it come from? Jesse rushes to her side, and uses Genesis to ask Tammy who God came to see at the club. Tammy weakly responds that God didn’t visit for the women, he visited for the jazz. God’s a jazz fan? I can get behind that.

Later, our trio hangs their hats at a nearby motel. Tulip and Jesse take a room, while Cassidy gets his own. Jesse sees a commercial for “Mumbai Sky Tower,” which tickled me because that’s the title of Episode 2. Tulip declares that after a long day where everything goes wrong she loves to lock herself in the bathroom, toying with Jesse. She tells him to find a way in if he wants to see her. Jesse punches the door to splinters, then swoops Tulip into his arms. Thus begins the sexy fun times we’ve been waiting for! 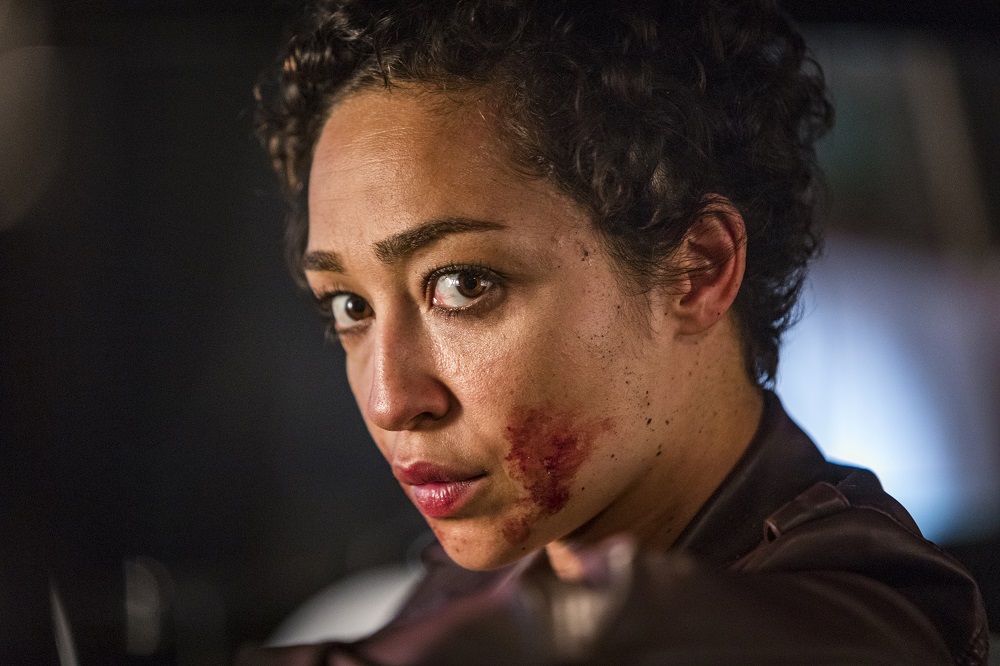 While Tulip sleeps, Jesse steps outside for a post-coital cigarette. He hears footsteps approaching. Jesse yells, utilizing Genesis, “Stop!” However, the footsteps continue to creep closer. We see The Saint of Killers raise his gun in Jesse’s direction, and he pulls the trigger.

Preacher came, it saw and it conquered with this banging (figuratively and literally) season opener. So many fun little moments for me – from Cassidy telling Tulip that foreskins from circumcisions are used in face creams (ew) to Jesse and Tulip’s steamy horizontal tango. The action sequences were sharp, not to mention that delightful car chase at the beginning set to “Come On Eileen.” As always, the acting was superb from our three leads. Cassidy is a favorite of mine, providing much needed levity in a sometimes heavy show.

RELATED: Trailer for Season Two of PREACHER Hints at the Season We’ve Been Waiting For

Do you think we’ll see God in the upcoming episodes? Will Jesse lose himself in Genesis, possibly going a darker moral route? He’s already treading that line as it is. Where’s Arseface? Also, let’s find a nice lady vampire for Cassidy. He deserves some happiness too. I guess we’ll have to keep watching. Stick around as I bombard you with weekly Preacher recaps here at Geek Girl Authority.

Preacher will officially air Mondays at 10pm on your AMC affiliate.