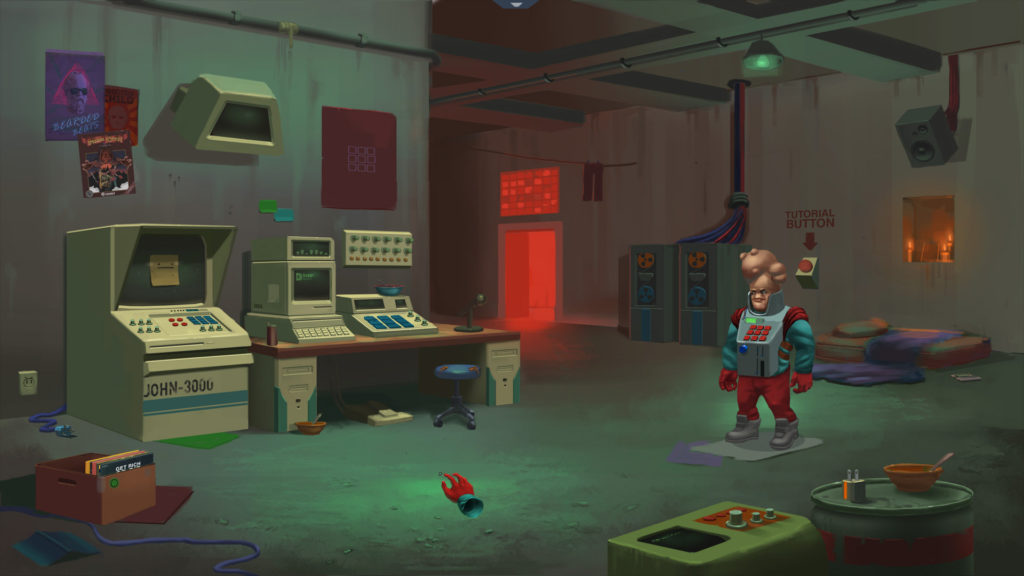 The 2016 PAX Australia Indie Showcase featured some seriously fun games. But nothing made me laugh quite like Paradigm, and I’m gonna call it: it may just be the funniest game you’ll play in 2017. Sure, South Park: The Fractured But Whole is due for release, but Paradigm is a unique joyride of giddy proportions that will leave your cheeks hurting (your face cheeks, FACE cheeks people).

Paradigm is a surreal point-and-click adventure game set in the strange and post apocalyptic world of Krusz; a land inspired by a mix of Eastern Europe and the 70’s and 80’s. You play as the unattractive yet over-confident mutated Paradigm, who must prevail through inconvenient trials to overcome the insecure (yet tyrannical) sloth antagonist Olof!

I caught up with the game’s developer Jacob Janerka to chat about his passion project.

Firstly, thank you so much for taking the time to chat! Secondly – who does that beautiful dog belong to in the dog tutorial and did it get heaps of noms for being such a good doggo?

Hey no worries, thank you for interviewing me! That is my friends doggo, and he had plenty of pats and snacks for sitting still for longer than 2 minutes. He is a good boy.

How long has it taken you to go from concept to the upcoming January launch?

I had the idea back in 2012 however I really did not take it too seriously until early 2014. Around that time I decided I would take it to Kickstarter and make a proper go of making it real. At the beginning of 2015 I went full time, and now here we are super close to January. So around 2 years full time, and off and on for 2 years before that. 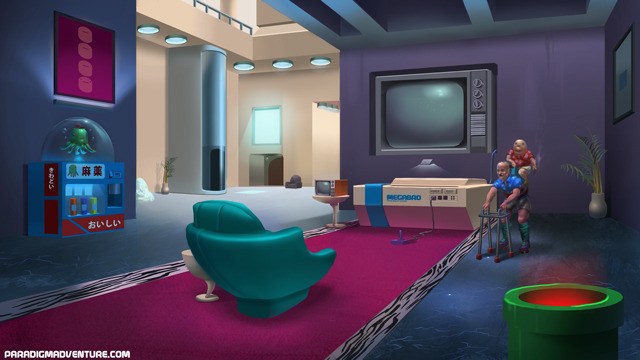 Paradigm had me giggling and belly laughing so much at PAX. What inspired you to put all the various elements and concepts together to create this game? It definitely felt like it had comedic elements of The Mighty Boosh and South Park in it.

That’s awesome! I’m glad Paradigm was able to crack the illusive belly laugh. As for what inspired me, all sorts of things, The Mighty Boosh and South Park are definitely apart of that. I tried to combine as many of my influences as I could so I could create something as unique as possible, like 2001 A Space Odyssey, Monty Python, Monkey Island and so many more. While music/movies/games are a big influence on Paradigm, its core settings/themes are influenced by personal experiences and my travels through Europe, and my own Eastern European background. I felt I could offer something different to the typical settings of America for example.

You grew up playing point and click games. Were there any in particular that inspired this game?

I wish I could say all of them, however I will not be that guy. The Lucas Arts catalogue was by far the biggest influence. When I was young I had Day of the Tentacle, Sam and Max Hit the Road, Monkey Island and Full Throttle. I feel these were definitely the heavy hitters when it came to influencing Paradigm. I’d say Day of the Tentacle and Sam and Max are what influenced the more weirder and stranger themes though.

Crowdfunding can be notoriously difficult for indie developers, how confident were you that a game as unique as Paradigm would be funded through Kickstarter? What do you think was the secret to breaking through?

To be honest, I (like most people) had no idea how it was going to turn out. I was definitely worried at the beginning that it was going to be too niche and I wouldn’t be able to find a big enough audience to fund it. However, lo and behold it worked out and I was able to fend off working full time retail a little longer. Who knew people wanted to play horribly deformed mutant characters.

As for the secret of breaking through, it comes down to taking the time to study how other successful game developers made their Kickstarters. I spent months preparing my campaign and learning generally how not to make it terrible. Then I spent a lot of time executing many marketing plans. Not all of them will work, but the point is that you are hitting it from every angle and it increases your opportunities to hit gold. Although of course, all that is null if you do not have a good game. You need to offer something either very unique, or just something very fun/interesting, preferably both. Saying all that, there are no hard and set rules.

You’re looking at creating a companion guide to the game, giving it more of a retro feel and adding extra detail into a detail laden game. What do you hope people will feel when they read the guide and play the game?

I really wanted Paradigm to be this tight ‘hand made’ experience. If you are so inclined you can explore every inch of it, but it is not necessary.  The guide specifically is to emulate what I (and I know others) felt when they got a new video game, and all they could do until they got home (or were allowed to play) was to read the manual. While it has Nostalgic roots, I think it’s just another little addition that allows the player to feel the thought and love that has gone into every aspect of the game. 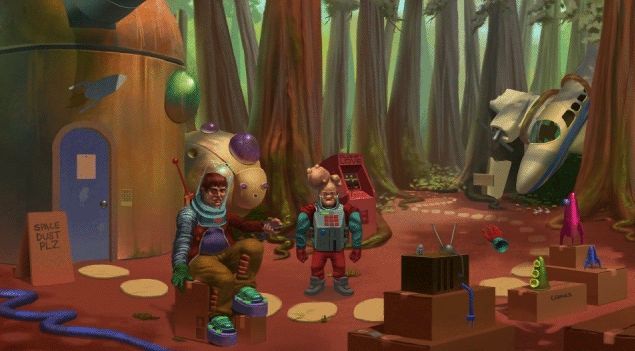 What’s next for you once Paradigm is complete?

OoooOOOOoo There is so much I want to do. I want to do all the things. Preferably I would like to clone myself, proceed to give myself a high five, then get multiple clones of myself to execute every idea I have. However cloning does not exist, and if it did, I may have to deal with rogue clones not listening to me. Ideally I would like to continue making more very weird video games and I’d love to also pitch a cartoon in the style of Adult Swim content. If all else fails I have a Seinfeld Point and Click Adventure project that I intend to pitch, which is more of a pipe dream.

ICYMI:
In this edition of Underrated Horror Movie of the Month, the spotlight is on the 1971 film Willard! A terrifying take on revenge! https://www.geekgirlauthority.com/underrated-horror-movie-of-the-month-willard/

ICYMI:
In this week's #ZombieLandSaga Revenge, Franchouchou help out at a makeshift center while Saga Prefecture rebuilds in the wake of the hurricane. https://www.geekgirlauthority.com/zombie-land-saga-revenge-recap-all-it-takes-is-for-you-to-be-there-saga/

ICYMI:
The Bad Batch succumbs to a perilous ambush and faces an unexpected return in this week's episode of Star Wars: The Bad Batch. Check out our recap! #TheBadBatch #BadBatch https://www.geekgirlauthority.com/star-wars-the-bad-batch-reunion-recap/

ICYMI:
Netflix has dropped another trailer for #TheWitcher season two. This time we are getting a quick look at our favorite monster hunter Geralt of Rivia. https://www.geekgirlauthority.com/the-witcher-season-2-geralt/