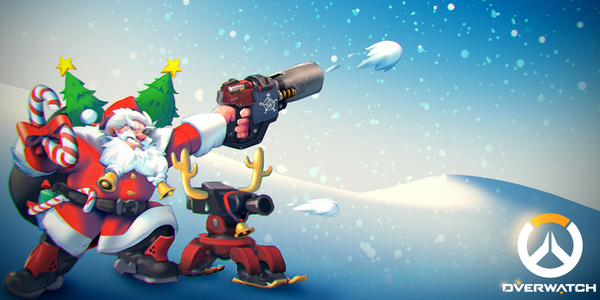 Blizzard officially announced their Overwatch Winter Holiday event and, while we have no information, we do have a start date: December 13.

First it was Halloween that dominated everyone’s imagination.  As soon as Halloween released, players turned their attention to whatever winter goodies Overwatch may have in store, because the event that was currently going on wasn’t enough and we needed something new to speculate wildly over.  Voice lines, theme music, possible event details including maps and what heroes are getting new skins were data mined.  But nothing was confirmed until today.

Overwatch released a very simple holiday card featuring Kings Row decked out in winter glory.  The card is an invitation to join Overwatch on December 13 for some holiday cheer.  I would assume, based on Hollywood during the Halloween Event, Kings Row will be a snowy wonderland for all our team killing needs.

On the 13th we will know if Kjasi and Venax were correct with their data mined information.  Although speculation has been going on for a while now, let’s jump in and let our imaginations run wild.  Personally, I want to see Mercy as a sugar plum fairy and D. Va’s mech as a snowman.  I’d also like to see all weapon’s shoot snowballs.  Don’t care what the weapon is.  Snowball rockets, snowy energy beams, a blizzard for Death Blossom, snow boulder instead of a Rip Tire, you get the idea.

We got Junkenstein’s Revenge, what will we get this time for a special mode?  Who can make snow angel’s the fastest?  Snowball fight of doom?  How about winter themed jack-o-lanters.. or snow-o-lanters.  I’ll see my way out.