It’s Outlander: Hospital Ship Edition in “Heaven and Earth” as Claire goes full-tilt against a typhoid outbreak on The Porpoise while seasick Jamie gets thrown in a cell on The Artemis. Who says this isn’t a medical show?

The episode opens with us seeing Claire’s (Caitriona Balfe) abduction by The Porpoise’s captain from Jamie’s (Sam Heughan) point of view aboard The Artemis. He and Fergus (César Domboy) are talking on deck when Fergus notices the other vessel unfurling its sails and hastening away. Jamie jumps up to assess the situation and begins giving orders to the crew to pursue. Unfortunately, he is not the captain, and the captain does not concur. He’s planning to sail safely to Jamaica, where they will reconnect with The Porpoise and Claire.

Jamie doesn’t take the captain’s decision well. He throws him against a mast, ready to pulverize him into submission, but the crew all draw their weapons against Jamie until he stands down. The captain minimizes his risk by putting Jamie in a jail cell below deck, where he weathers the bulk of the remaining journey. 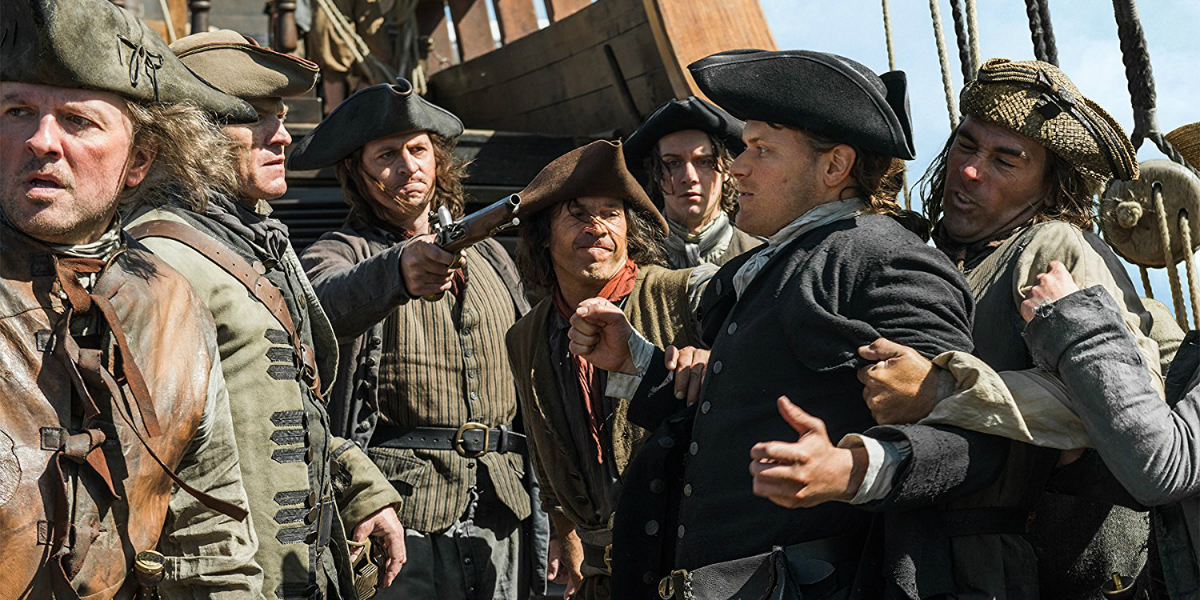 Without Willoughby’s (Gary Young) acupuncture treatments, Jamie passes his time in the brig by heaving into a bucket and scheming about how to get Claire back. His routine is broken up only by Fergus’s visits, and on one of these he orders his foster son to steal the keys to his cell, rally the men to mutiny and help him steal the ship to save Claire. He compels Fergus to say yes by promising to bless his marriage to Marsali (Lauren Lyle) if he does.

When Fergus attempts to get the captain’s keys, he instead overhears the captain and two of his men discussing their new knowledge of Jamie’s true identity and their plan to turn him over to the captain of The Porpoise when they arrive in Jamaica. Jamie is now wanted for murder charges, on top of treason, because the thug they hid in the crème de menthe has been found. Fergus hears the men say that if he steps out of line they’ll kill him and take liberties with Marsali, so he opts not to steal the keys. This disappoints Jamie, but it also ensures that Fergus, Jamie and Marsali all make it to the islands safely.

Claire also discovers the plot to use her as bait to draw Jamie out and arrest him when she reads the captain’s log on The Porpoise. Her intention was to determine whether a Portuguese flag she discovered below deck belonged to the ship that took Young Ian, but instead she found the captain’s notes about having a sailor on board who recognized Jamie.

Until this moment, Claire’s focus had been entirely on stopping the spread of typhoid on the ship and caring for the men who were already ill. Aided by a 14-year-old officer named Elias Pound (Albie Marber), she’d identified patient zero and isolated him from the rest of the crew, mobilized two men distilling pure alcohol from the ship’s rum so that everyone could wash their hands in it regularly, cleaned and organized all of the quarters for the healthy and ill and implemented a gentle diet for the sick of a goat’s milk porridge. She’d also made an enemy of the cook, who lost his only (apparently well) helper when Claire identified him as a carrier and the point of origin for the disease’s spread. 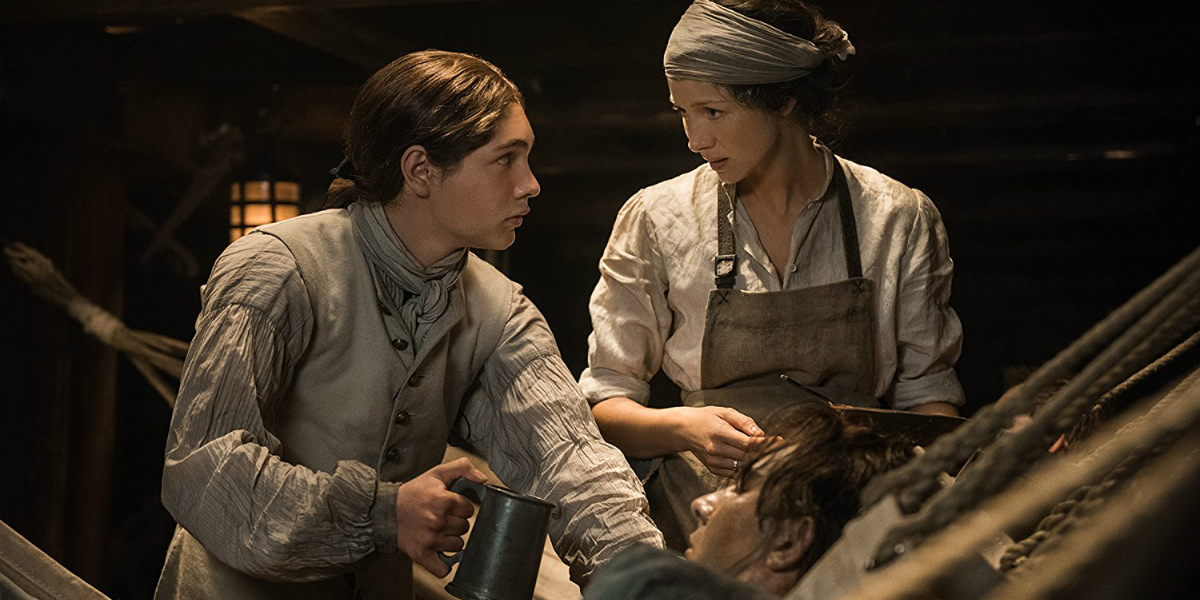 After learning that Jamie’s in danger, she asks Mr. Pound help her find the man who’d recognized him and reported him to the captain, pretending she believes him to be a second carrier. When he’s brought to her, we recognize him as the flunky who attacked Young Ian in the print shop and was badly burned! Instead of receiving a promotion for exposing Jamie’s sedition, the man had been forced into service on the ship, which left him hungry for revenge against Red Jamie. Claire follows through on her pretense and has him jailed adjacent to the actual disease carrier, then frets over how to warn Jamie that he’s on his way into a trap.

In the midst of this, she meets and befriends the ship’s livestock mistress when the woman’s husband gives himself alcohol poisoning by stealing Claire’s disinfectant alcohol. Claire correctly diagnoses him and assigns Mr. Pound to watch him until he’s well, which earns her Annekje’s (Chanelle de Jager) loyalty. It’s one of the sweet Mr. Pound’s final acts before the disease takes him, leaving Claire in tears.

Later, Claire confides in Annekje about her worry for her husband, and although Annekje speaks little English, she understands. She concocts a plan for the ship to stop at the nearest island so she can graze her goats, allowing Claire a chance to escape. The captain intercepts Claire before she gets far, though. Annekje isn’t deterred by this failure, and she hatches a new plan wherein Claire jumps overboard with a makeshift raft made of barrels and floats to the closest island.

Even though it’s extremely risky, Claire goes for it, and the episode ends with her plunging into the dark water.