Claire (Caitriona Balfe) and Jamie (Sam Heughan) return to Lallybroch with Young Ian (John Bell) in tonight’s Outlander, but the welcome isn’t a warm one. Jenny (Laura Donnelly) spends most of “First Wife” freezing Claire out, and as shiz begins to go down, it’s clearer and clearer why.

When the three refugees from the print shop fire arrive at Lallybroch, Claire is obviously hoping for a joyful reunion with Jamie’s sister and her family. What she finds instead is a Jenny who will barely meet her eye and seems almost resentful of her sister-in-law’s reappearance. The house is full of Jenny and Ian’s (Steven Cree) grown children and their children, driving home at every turn how many years have passed since Claire left.

The chill Claire feels from Jenny makes her want to tell her the truth about who she is and where she’s been for the last 20 years. She says this to Jamie, but he doesn’t think a simple woman like Jenny, someone who has never really left her farm, could digest the whole truth. (Which sounds like some sexist BS to me, but I wasn’t asked.)

The conversation about how intense Jenny’s radar for truth is hits a nerve for Jamie, and he decides he can’t put off any longer telling Claire the secret he’s been holding on to since she arrived. Before he gets a chance to speak it, though, the secret reveals itself as Laoghaire (Nell Hudson) and her daughters Marsali (Lauren Lyle) and Joan (Layla Burns) burst into Claire and Jamie’s bedroom, the girls begging their “daddy” to explain who the strange woman is.

That’s right, y’all! Here’s the secret I’ve been waiting all season for: Jamie married Claire’s enemy, Laoghaire, then hid it from her for too long.

Laoghaire is in fine form, going nuts at Claire and calling her a variety of choice names. Apparently Jenny had her daughter inform the current Mrs. Fraser that the first Mrs. Fraser had reappeared. What the what?

Jamie gets Laoghaire out of the house, assuring little Joan that although his marriage with her mother is over, he’ll always take care of her and her sister.

When he returns to his room, a destroyed Claire is dressing and preparing to leave. She is understandably distraught over finding out simultaneously that her husband has married a woman who tried to have her killed and that he’s been lying about it. The exchange about who did what to whom escalates quickly into a raging row in which Jamie frames Claire’s departure 20 years earlier as her “leaving him” and they both claim ownership of living half lives without each other.

He gets so angry that he attacks her with passion, trying to express with his body the intensity of his feelings only for her. She resists at first, then engages. Finally, thing are getting good! At least they are until angry Jenny comes in and douses them with a pitcher of water, shaming them for disturbing the entire house.

Effectively halted by Jenny’s interruption, Jamie retreats to the stable for the night and Claire finds a fire and some whiskey downstairs. Jenny comes in and essentially says that the Claire she knew would never have stopped looking for Jamie, and that family who have moved to America can still write letters to let the people they say they love know that they’re alive and well. It’s a good point.

Claire tells Jenny she married for survival in America and suppressed her past to make the marriage work. She says she returned to Scotland when her husband died to find Jamie’s grave and instead found Jamie. She also says she didn’t have kids with her America husband. Wise Jenny sees some truth in Claire’s story, but she knows there’s more to it. 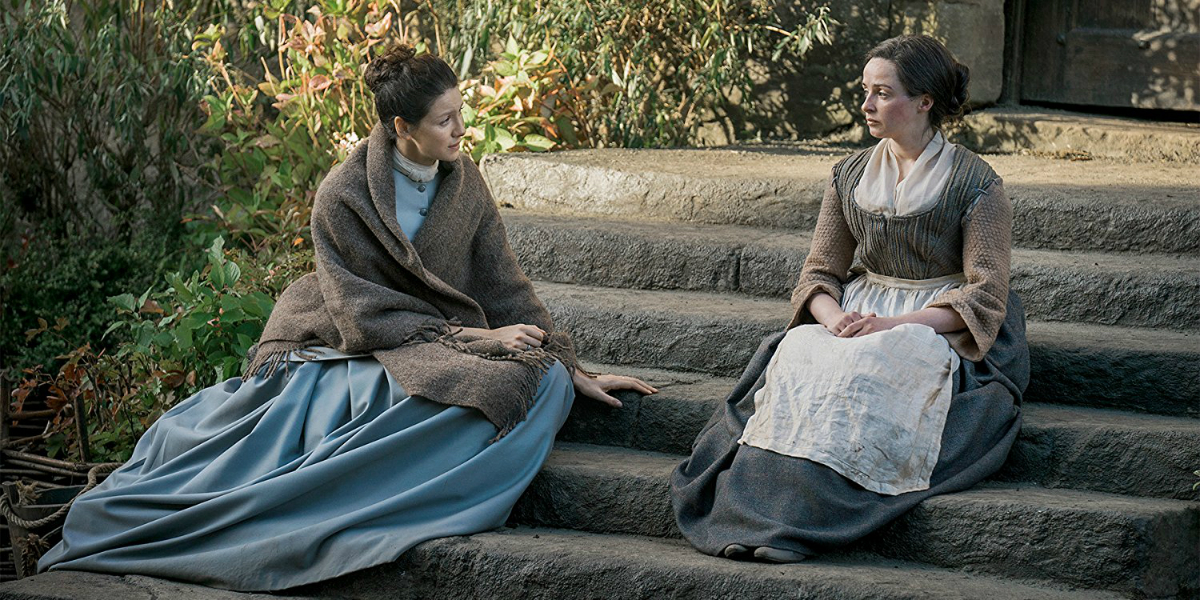 The next day, Claire is angrily leaving the house with her bag over her arm– probably just to collect herbs, rather than to leave altogether– when Jamie stops her in the courtyard to profess his singular love for her. This, of course, is when Laoghaire makes another appearance, this time with a gun. She tells Claire to get out of their lives, pointing the gun at her. Jamie steps between them, and the gun goes off, hitting Jamie with buckshot in the shoulder.

Claire tackles Laoghaire and sends her packing, then takes Jamie in to perform buckshot removal surgery. This gives her another chance to use her 1968 medical tools in the 1700s. (This time with penicillin!)

Afterwards, she is still angry but agrees to let Jamie explain himself. He had been living his half life for about 18 years when he met Laoghaire’s fatherless daughters at a Lallybroch holiday party. When he found out who the charming girls’ mother was, and that she was widowed, he thought he might be able to have a family after all. Since Laoghaire is cray (or seriously damaged by one or both of her late husbands), that didn’t really work out, so he moved to Edinburgh. He does love the girls, though.

Not long after, lawyer Ned Gowan (Bill Paterson) arrives to confirm that Claire’s re-emergence nullifies Jamie and Laoghaire’s marriage, and that he’ll likely have to pay restitution to the church and alimony to Laoghaire. The sum she wants is outrageous, so Jamie concocts a plan to have Young Ian swim back to the island Jamie visited when he escaped from Ardsmuir. Although he’d lied to Lord John Grey about it, he actually had found a box of treasure there, and if he retrieved it he could easily meet Laoghaire’s demands.

Unfortunately, Young Ian arrives on the little island just ahead of some pirates. When he emerges with the box of goodies, he’s kidnapped! Jamie and Claire can only look on helplessly.