“A. Malcolm” is an episode of Outlander that might be best watched (ahem) alone. It’s taken our heroes 20 years, which somehow felt like it was passing in real time for the audience, to find their way back to each other. Now that they’re reunited… it feels so good.

The last episode ended with Claire (Caitriona Balfe) entering Jamie’s (Sam Heughan) Edinburgh print shop and eagerly telling him she was there, which caused him to dramatically faint. This episode rewinds a bit in Jamie’s day and shows the lead-up to that moment from his perspective.

He gets dressed in a brothel with the help of a professional lady, walks through the city streets to his business and enters with pride, stopping to buff his sign with his sleeve on the way in. He discovers two of his Ardsmuir pals hidden away in his back room, and after scolding them for risking an association between them and his business, he opens a hidden panel in the wall and loads them up with treasonous leaflets he’s printed.

His assistant, Geordie (Lorn Macdonald), walks in on the scene and takes a heap of teasing from Jamie’s friends for the poorly concealed growth on his neck, bulging against his scarf. Geordie is a sour fellow, and although Jamie agrees that he doesn’t deserve to be harassed by tweedledee and tweedledum, he finds new ways to be sour when the ribbing stops.

Jamie sends Geordie out for ink supplies, then turns to his work, loading paper into the real, working printing press they built for the show, inking the plate and beginning to make copies of something. He sometimes dons his reading glasses to inspect his work. Time passes.

Then. He hears someone enter the shop.

Evoking the moments in the Back to the Future trilogy when Marty eavesdrops on moments he’s already lived through, we watch Jamie mistaking the person he hears entering the shop above for Geordie and asking if he went all the way to Glasgow for the ink. But of course it isn’t Geordie. “It’s me…. Claire.” 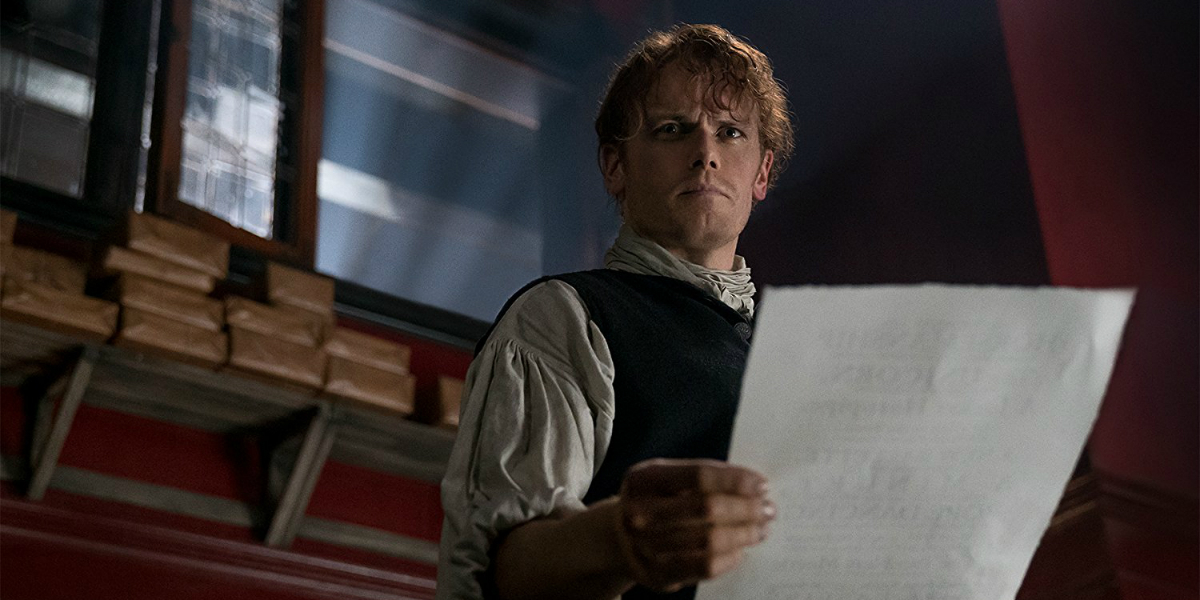 He faints dramatically, but this time we get to see him awaken, looking up at Claire and beginning to believe she is real.

Can we see some Emmy love for Caitriona Balfe and Sam Heughan in this episode, PLEASE? The next hour of the episode is the two of them hitting every emotional beat as they awkwardly begin to re-know each other.

She’s come back because she’s learned he’s alive and she never stopped loving him with white-hot intensity during the 20 years they were apart– but he doesn’t know that yet. He fainted because he has dreamed she returned to him so many times in the past 20 years that he believes he is hallucinating. He yearns for her and has never let another woman across the threshold of his heart– but she doesn’t know that yet. They know each other in an unwavering, soul-deep way that has held their love safely since they met, but they are aware that they don’t know what each other has spent their days doing (or whom they’ve spent those days with) for a very long time.

(Sidenote: The kisses between Claire and Jamie are so good. Having seen a lot of gross screen kisses in Marvel movies recently– notably while rewatching Ghost Rider— I so appreciate the beauty and appeal of these kisses.)

After Geordie huffs out, Claire and Jamie retire to his back room so he can put on some clean trousers. She tells him he has a daughter, Brianna, and produces a small plastic baggie full of snapshots from one of her pockets. Jamie sheepishly puts on his reading glasses and begins to know his daughter by seeing her photos and having Claire tell him a little about her.

He reciprocates by confessing to having a son, Willy, and shows Claire a small portrait of Willy as a young boy. This checks her joy a bit, and although he gives quick reassurance that he didn’t love Willy’s mother and that the woman is dead, there isn’t room in this reunion for him to fill in all the blanks about that episode for her just yet.

The clock strikes one, and Jamie remembers he needs to be at a tavern nearby for an appointment. He invites Claire to accompany him, and on the way they encounter Fergus (César Domboy), now a handsome young man. He recognizes M’lady immediately, and they embrace as she studies the face of the young man she cared for as a boy. 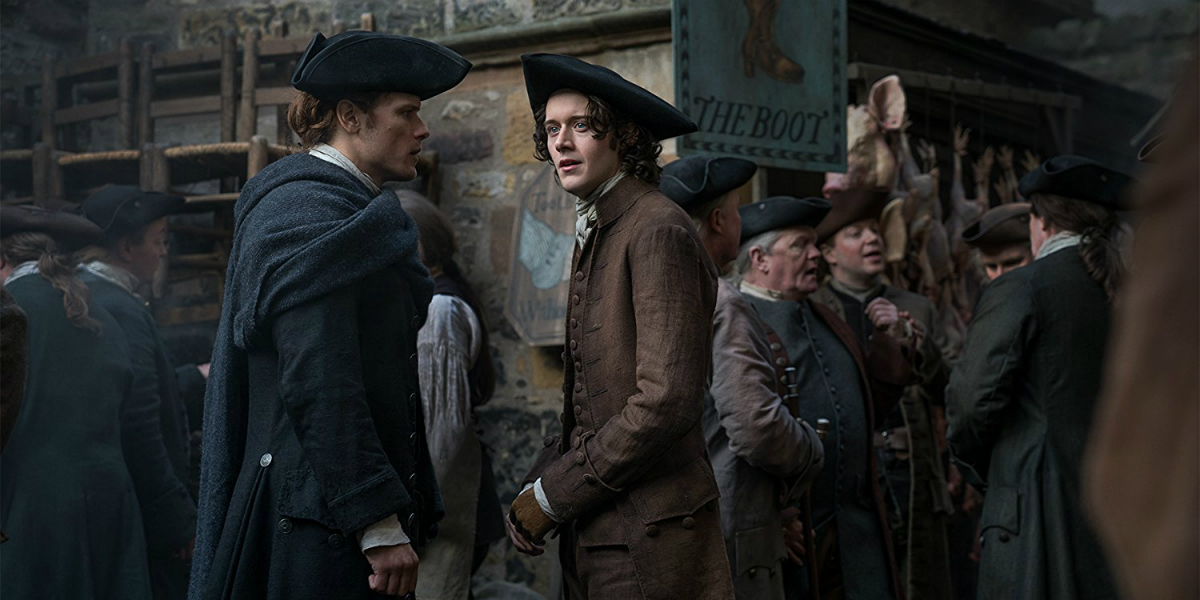 Fergus and Jamie excuse themselves so that Fergus can clue Jamie in to the fact that a friend of theirs has had too much to drink and needs seeing-to. While they’re alone, Fergus vaguely asks Jamie something to which Jamie responds that with Claire back, he’s “not even sure it’s a concern.” He’ll consult with Ned Gowan about the legality. (SHOE? WILL YOU DROP NEXT WEEK?)

They part ways, and Jamie and Claire make it to the tavern where the inebriated friend, Mr. Willoughby (Gary Young), is scuffling with a prostitute whose elbow he has licked without paying. Jamie settles the man’s bill and introduces him to his wife– Mrs. Malcolm. He leaves Claire and Mr. Willoughby alone while he sneaks to a cellar to pay off an imperious man… for something.

While Claire and Willoughby are alone, he tells her how Jamie saved him when he was starving after coming to Scotland as a stowaway on a ship from China. She’s impressed, and she leaves him with a feeling of sincere warmth. He says something in Chinese, which Jamie tensely translates as “honorable wife.”

At last, it’s time for Claire and Jamie to be alone. He takes her to his home, which is… the brothel we saw in the morning. Madame Jeanne (Cyrielle Debreuil) is not happy when Jamie brings a woman into her establishment, and she’s icy cold to Claire when he introduces her as his wife before ascending to the attic room he keeps at the brothel.

Claire’s joy is checked again, as now she knows her husband has a son from another woman and lives in a brothel. The sound of people having sex underscores her attempt to keep cool while Jamie explains why he lives there. She starts to calm down, and they begin to kiss again… but again they are interrupted when a maid arrives with dinner. 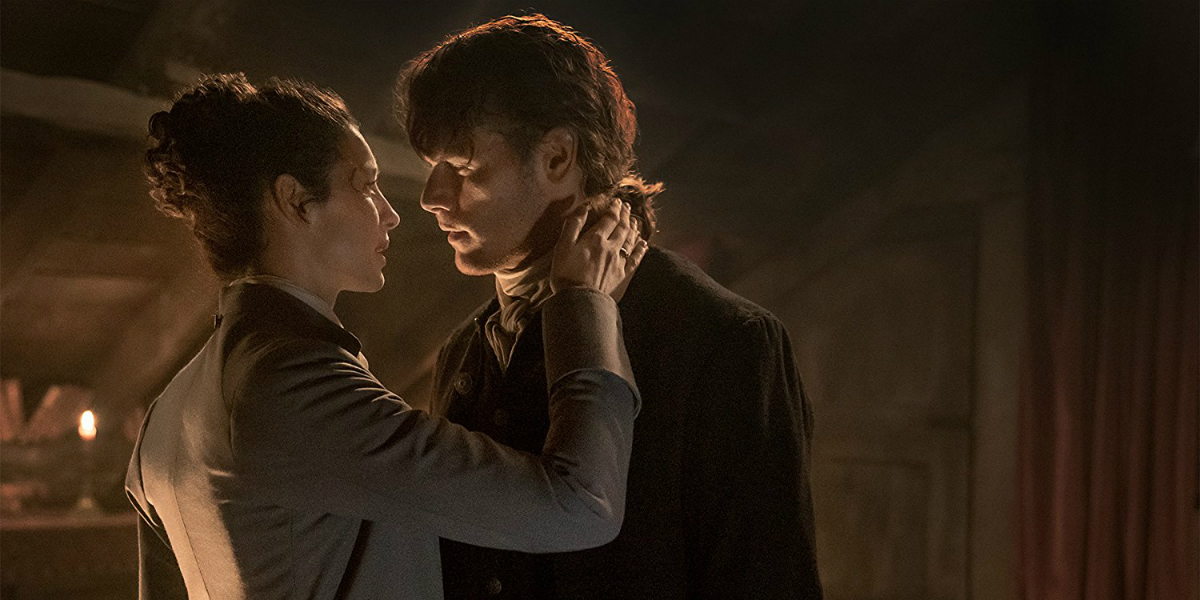 They linger over dinner, talking about the good old days and filling each other in on the years they spent apart. This dinner of blah blah blah is so long that the show speeds it along with a voiceover from Claire. And then: dessert.

Standing in front of the fire, the two are at least as nervous as they were on their wedding night. Their bodies have changed with age and they’ve both been chaste for a very long time. They undress each other slowly, and we get to see the layers of Claire’s homemade outfit, which is remarkably authentic until Jamie gets to the zipper down the front of her corset.

When they’re finally naked, she is shy. He tells her she’s the most beautiful woman he’s ever seen, and they move on each other with hunger and desire.

They fall to the bed in a passionate embrace, and he nearly breaks her nose with his forehead as they awkwardly collide. They recover and he lifts her up on the bed, but drops her with an accidental intensity of impact. They laugh, and they recover. It’s clumsy at times, but that doesn’t stop her from telling him to go for it– and not to be gentle.

The first time is quick, but they spend the rest of the night talking and making love. They reassure each other of their love and desire for each other, regardless of what’s happened in their lives in the last 20 years. They’re willing to roll with anything if it means reuniting. So they reunite– over and over all night.

During a lull in the lovemaking, Claire asks Jamie what he really does for a living. She’s not buying the print shop as a full-time job. He confesses to printing seditious pamphlets, then to smuggling liquor to customers like the Madame who provides his lodgings. There’s a beat in this conversation when Claire assures him he’ll never lose her again, then teases that the only exception would be if he’s done something immoral. He hesitates before deflecting.

In the morning they decline breakfast when the maid knocks, but Jamie still eats. WINK!

Ultimately, he leaves her to sleep in while he heads out to attend to some business. Once she rises, she’s surprised by a knock at the door. It’s Young Ian Murray, there looking for Jamie. He mistakes Claire for a prostitute and she identifies herself as his aunt. He’s reasonably bewildered, but Claire has already begun telling people that she hied herself off to America when she believed Jamie had been killed at Culloden and has come back now because she learned that he was alive.

When Young Ian leaves, Claire heads downstairs in her shift and a shawl. She joins the prostitutes at their breakfast and doesn’t go out of her way to correct them when they mistake her for a new girl. They’re having a fine conversation about birth control methods of the era when Madame Jeanne discovers them, and her disdain sends Claire packing for her room.

As she enters, she can tell immediately that something is wrong. A bull of a man is ransacking the room, looking for Jamie’s ledgers. He’s willing to pause to rape Claire and see if that will jog her memory about where the ledgers might be kept… and that’s all we get for this episode! 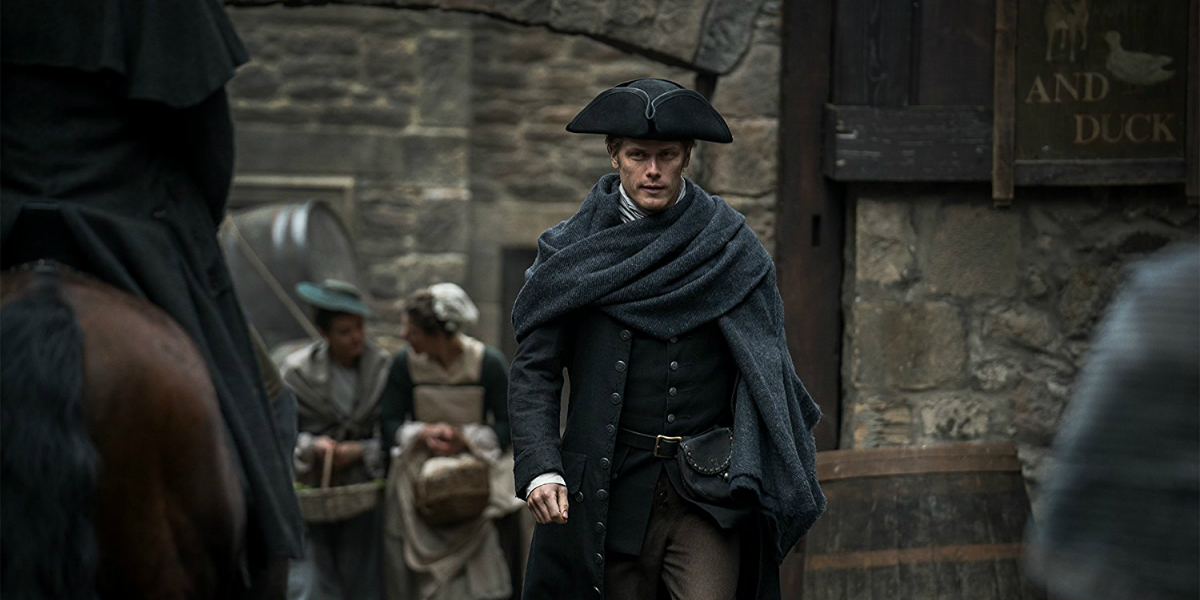