We’re back in Scotland in 1968 in Claire’s (Caitriona Balfe) timeline, and she and Brianna (Sophie Skelton) are working with Roger (Richard Rankin) to look for Jamie (Sam Heughan) in the past (by reading a million old papers). They get a major lead when they discover that he was in Ardsmuir prison in the 1750s, but the trail runs cold after that. Joe Abernathy (Wil Johnson) calls Claire from Boston to try to lure her home, and ultimately she decides she ought to return to her life there instead of continuing to search for a ghost. By episode’s end, she and Bri are homeward bound, despite Brianna and Roger having shared their first kiss. 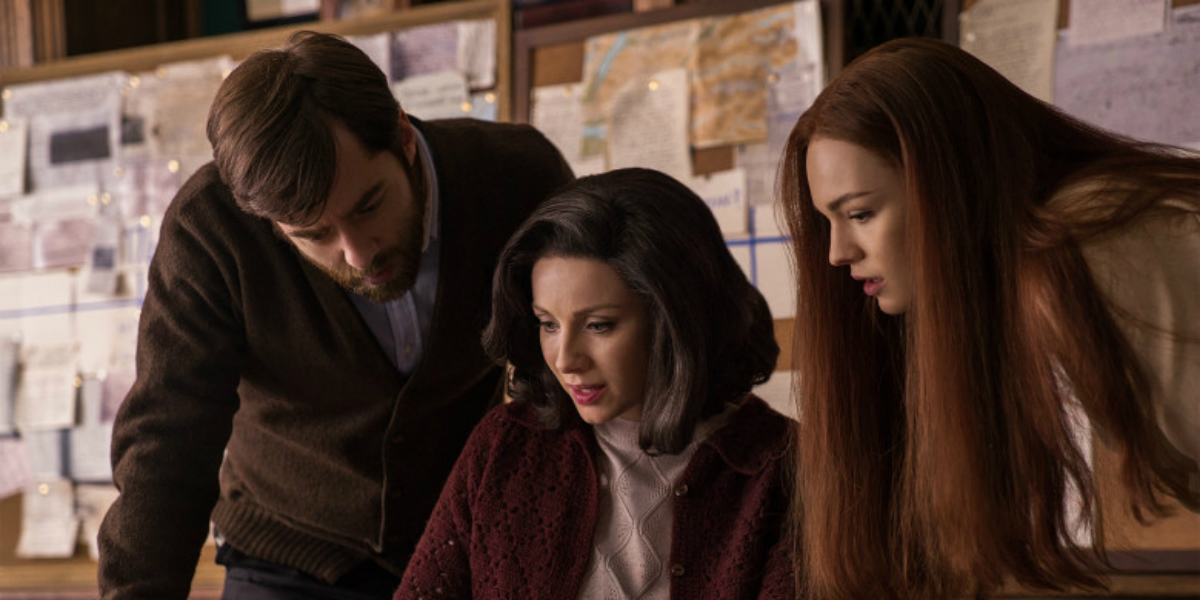 Most of this episode follows Jamie through his years working (first a prisoner/groom and then just a groom) for the Dunsany family at their estate, Helwater. Jamie appears to be happy working with horses and having found a safe haven, thanks to Lord John Grey’s (David Berry) goodwill. Lord Dunsany (Rupert Vansittart) knows some of the truth of Jamie’s background, but he chooses not to share this with his family because of his wife’s bitterness towards the Jacobites over the loss of her son at Prestonpans. (Jamie uses the name Alex MacKenzie with the Dunsanys, which facilitates his safety there, but is also what causes Claire’s detective work to hit a wall.)

Of course Lady Dunsany (Beth Goddard) knows or discovers the truth of Jamie’s Jacobite past eventually, as do her daughters, the Ladies Geneva (Hannah James) and Isobel Dunsany (Tanya Reynolds). In fact, Lady Geneva discovers the whole truth about Jamie after witnessing a very tense exchange between him and her guest, Lord Hal Melton (Sam Hoare), who learns that his brother has hidden Red Jamie away at the Dunsanys’ when he and the Dunsany daughters stumble across Jamie and Lord John Grey playing chess together one day.

Geneva uses her wiles, and some alcohol, to learn from Lord Hal who Jamie really is, and she later presents Jamie with a shocking ultimatum as he mucks the stables. She is about to be married off to an old perv named Lord Ellesmere (James Cameron Stewart), and she doesn’t wish to lose her maidenhead to him. She gives Jamie some pretty straightforward threats to his safety and that of his family if he refuses to come to her bedroom and deflower her.

Jamie, committed to keeping his family safe above all else, agrees to her demands and sneaks into her bedroom that night. What follows is pure lady porn as he undresses slowly for her while she watches, then gently (and pretty graphically) teaches her how to make love. When she tells him afterwards that she loves him, he explains that she’s just experiencing normal post-sex feelings, and that love is something very different. It’s hard to see him with someone other than Claire, but the casting director softened the blow by choosing a woman who looks a great deal like a young Claire. The blow is softened further by his speech about love (for Claire) afterwards, and it is softened the rest of the way when Geneva dies giving birth to Jamie’s son, Willie (Clark Butler).

Lord Ellesmere, apparently up enough on the birds and the bees to know that since he and Geneva never consummated their marriage the baby can’t be his, is ready to kill the infant before its mother’s body is cold. The whole Dunsany clan is there to witness his raving, and Jamie is pulled into the mix by a maid who alerts him to the fact that there’s a violent standoff in the making. He disarms Lord Dunsany, who has pulled a gun on Lord Ellesmere (who has the baby in his arms). Lord Ellesmere refuses to calm down, though, and when he raises his blade as if to stab the infant, Jamie fires the gun and kills him instantly.

After this act of heroism, the Dunsanys offer Jamie his freedom. He cannot bear to leave his son, though, so he stays in their employ for serval years. As Willie grows into boyhood and begins to resemble him more obviously, Jamie decides he’d better leave Helwater to prevent any problems for his son. Lord John Grey and Lady Isobel have decided to marry, despite Lord Grey’s inclination for men, and Jamie entrusts them with the care of the boy. (He even offers his body to John Grey in exchange for his vow to care for Willie, which the Lord declines despite being tempted.)

Jamie rides off to freedom at the end of the episode, likely on his way home to Scotland.