OUTLANDER: Get Ready for the Season Three Premiere Sunday!

Season three of Outlander begins this weekend, so let’s catch up on what happened during season two and where we left everyone, shall we?

Season two opened with Claire (Caitriona Balfe) walking disoriented down a Scottish road, moments after having passed through the stones, leaving Jamie (Sam Heughan) to go off to the Battle of Culloden while keeping her promise to protect their unborn child by returning to Frank (Tobias Menzies). It’s 1948,  and she’s been gone for two or three years (the season premiere says two, the finale says three).

Reunited with Frank, Claire is so affected by his resemblance to Black Jack (also Menzies) that she recoils from his touch when he visits her in the hospital. Patient Frank, relieved to have her back, just copes with this, and they retire to Reverend Wakefield’s (James Fleet) house so Claire can convalesce.

They’re there long enough for Frank to have a fellow historian authenticate the outfit Claire was wearing when they found her as a uniquely preserved example of common Scottish women’s wear of the 18th century. Claire uses the time to talk to Mrs. Graham (Tracey Wilkinson) about her experience, processing her grief and readjustment away from Frank until she’s ready to tell him the whole truth.

When the moment arrives, it takes a whole night for her to tell her story. Frank is ready to accept the fanciful tale and move forward until Claire drops the bomb that she’s pregnant with another man’s child. Then Tobias Menzies vies for Emmy gold while processing her news– beginning with impulsive joy and moving through waves of rage and betrayal before telling her that he wants to stay married and move forward with two conditions: the baby will only know him as its father, and Claire will stop researching Culloden and looking for news of Jamie in the past. She agrees, and they move to Boston to start fresh.

As they disembark from the plane in Boston, we jump back to another fresh start: Jamie and a pregnant Claire arriving in France with Murtagh (Duncan Lacroix) in 1745. They’ve just broken Jamie out of prison, believing they’d killed Black Jack in the process, and have escaped to France for an undetermined amount of time.

The part of the season that happens in France is a mix of lavish costumes, intrigue related to Jamie and Claire’s efforts to prevent the Jacobite Uprising and Jamie being traumatized by what happened to him in prison. While they’re there, Jamie works in his uncle’s wine business, Claire volunteers at a hospital, they take in the orphan Fergus (Romann Berrux), Jamie sucks up to Bonnie Prince Charlie (Andrew Gower) and they run in the highest society.

During their visits to the royal court, they learn of Black Jack having survived being trampled at the prison and then encounter him in person. They also meet his younger brother, Alex (Laurence Dobiesz), and Claire gets involved in trying to talk the terminally ill young man out of his intentions for meek Mary Hawkins (Rosie Day), knowing that Mary will ultimately marry Jack and give birth to one of Frank’s direct ancestors.

Jamie and Jack duel, despite Claire having made Jamie promise not to kill him until Frank’s ancestor is conceived, and the disastrous duel ends in Claire miscarrying and Jamie going to prison. Claire gets him out by playing La Dame Blanche, the witch persona Jamie inadvertently saddled her with, for the King. After all this, Claire and Jamie visit the grave of their stillborn daughter, Faith, and return to Scotland.

Not long after, Bonnie Prince Charlie also arrives in Scotland. Jamie and Claire keep up appearances as Jacobites while continuing to try to stop the Uprising from happening. In the lead-up to the Battle of Culloden, Claire experiences PTSD in an episode that spends A LOT of time on trench foot, Angus (Stephen Walters) is killed at Prestonpans, Murtaugh kills the Duke of Sandringham (Simon Callow), and Claire assists a dying Alex Randall in marrying his beloved Mary to his homosexual brother, Jack, because Alex wants Mary and their unborn baby to have the benefits of being a military man’s family.

In the finale, we jump ahead to 1968 and meet young adult Brianna (Sophie Skelton) and adult Roger (Richard Rankin) when Claire and Brianna return to Scotland for the first time since Frank passed away. They attend Reverend Wakefield’s funeral, and Roger invites them to stay with him for a few days and take in the sights. While they’re there, Brianna and Roger run into Geillis Duncan/Gillan Edgars (Lotte Verbeek) before she travels back to the 1700s, and Claire goes searching for Jamie by visiting the ruins of Lallybroch and the Fraser memorial on the battlefield at Culloden. 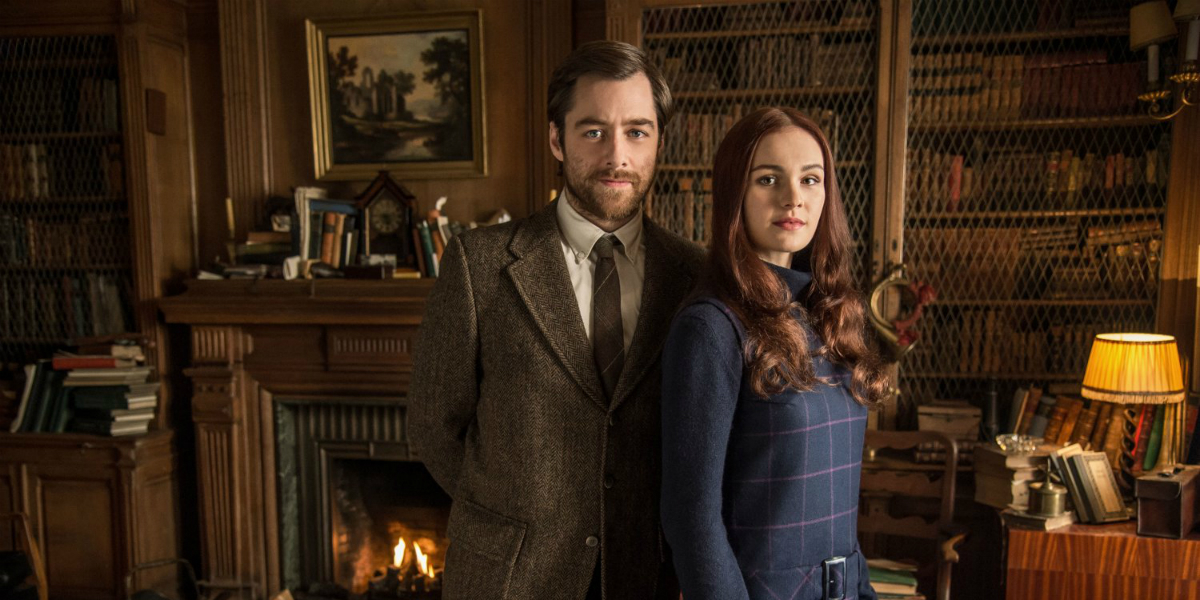 Brianna and Roger stumble across a clipping about Claire’s disappearance while looking for records related to Frank in the Reverend’s files, which leads to Brianna deducing that Frank couldn’t be her biological father. Claire spills the truth out to them like a flood, not having been allowed to talk or think about Jamie for 20 years. Angry and hurt, Brianna rejects Claire’s story, but when Claire discovers a flyer about the White Roses of Scotland that Brianna got from Gillian, it doesn’t take long for Brianna to see proof that her mother’s story is real: they watch Gillian disappear through the stones into the past. 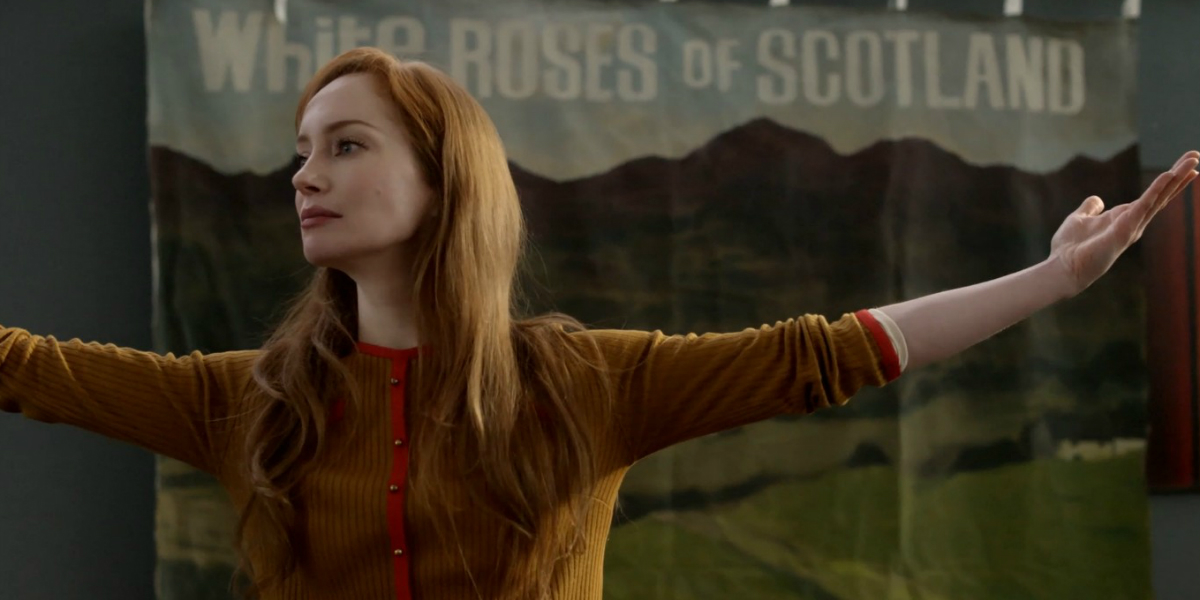 Meanwhile, the Battle of Culloden is proceeding without interruption by Jamie and Claire’s efforts. Jamie kills Dougal (Graham McTavish) in defense of Claire after Dougal overhears them considering assassinating Prince Charles to stop the Uprising. Jamie decides to go ahead and fight, expecting to die with his men, and he sends Claire through the stones.

After Gillian disappears, Roger and Brianna reveal that they’ve found evidence that Jamie survived Culloden, and Claire immediately decides she needs to go back to him.

So! Here’s where the folks we know best are as we resume Sunday:

Jamie: Alive in Scotland in the 1700s

Claire: A surgeon and preparing a return to Jamie from 1968

Brianna and Roger: Believing Claire in 1968

Colum MacKenzie (Gary Lewis): Dead of his life-long illness, with an assist at the end from Claire

Catch my season three recaps beginning after this weekend’s premiere!