ONCE UPON A TIME Recap: (S06E11) Tougher Than The Rest

Once Upon A Time returns after the Evil Queen made a wish to grant Emma Swan’s greatest wish…to not be the Savior.  Regina was able to find Emma and they were headed back to Storybrooke, but were stopped by Robin Hood.  The Villain appeared in Storybrooke to revel himself as Gideon, Belle and Gold’s son. 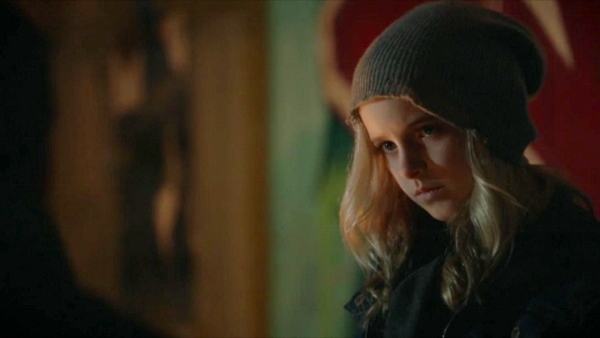 We begin with a flashback to a little girl living on the streets.  A young boy approaches her.  They talk about the story of the Ugly Duckling.  She says the duckling became a swan because it was always a swan.  Her new friend says it’s about the believe that you can change your fate and become a swan.  He asks her if she wants to remain on the streets.  He takes her to the police station where she introduces herself as Emma Swan.

Back to the present, Emma (Jennifer Morrison) and Regina (Lana Parrilla) are still in the alternate universe where Robin Hood (Sean Maguire) is holding them at arrow-point (Ha!).  They missed their chance to go through the portal that would take them back to Storybrooke.  Robin Hood robs them and runs away.  Henry (Jared Gilmore) rides to save Emma from Regina. Emma rushes Regina to safety because in this world, she is the Evil Queen.

In Storybrooke, David (Josh Dallas) and Hook (Colin O’Donoghue) look for the hooded figure. David has decided not to wake up Snow until he stops the hooded figure from killing Emma.  Hook backs him up, but he’s worried about how determined David is. 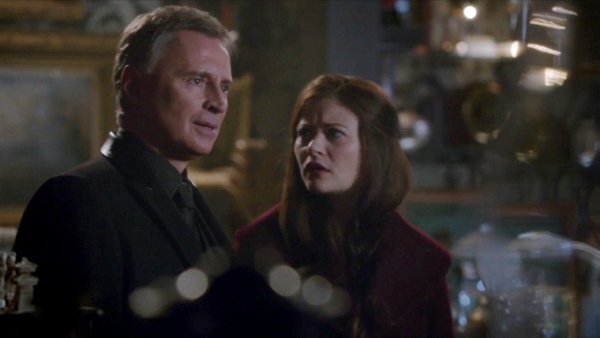 Gold (Robert Carlyle) and Belle (Emilie De Ravin) ask how Gideon (Giles Matthey) is grown up and there in Storybrooke. He was just a baby and had been taken by the Black Fairy (Jaime Murray) a few days ago.  Gideon tells them that she was cruel but it make him strong. The Black Fairy tried to make him evil, but he always remembers Belle.  He wants to be good like her.   He reveals that he wants to kill the Savior to become the Savior.  Then he will go back to overthrow the Black Fairy and save the land where he grew up.

Regina and Emma think of ways to get back to Storybrooke.  Emma remembers that Pinocchio (Eion Bailey) is nearby and pays him a visit.  She tells Pinocchio her story and asks if he knows about the wardrobe that his father Geppetto made for her parents. The wardrobe was the portal that Emma and Pinocchio went through to save her from the other Evil Queen. Pinocchio doesn’t know and Geppetto is dead.  He can try and replicate it.  The tools and wood that Geppetto used were magic.  Pinocchio is more than happy to help Emma out.  Meanwhile Regina slips away to look for Robin.

Regina goes back to the tavern where the Blue Fairy (Keegan Connor Tracy) first told her about Robin.  She walks in to talk to him and everyone scatters.  Regina just wants to know if Robin is happy. He says he’s great and Regina is crushed.  He asks why she cares, but the Sheriff of Nottingham (Will Traval) arrives and takes them both into custody. 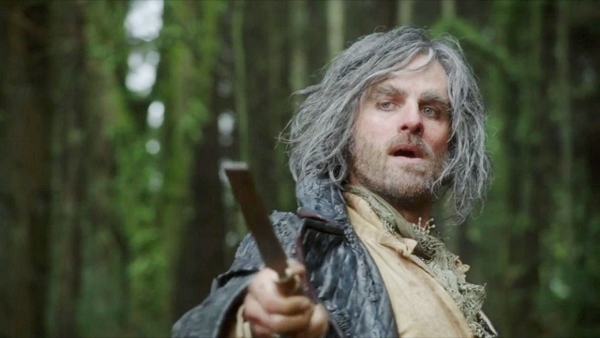 Emma and Pinnochio find the tree with the special wood that will make a wardrobe/portal.  Pinnochio says that they have to use a specific set of tools to cut the wood.  Just before he starts to chop, an old, overweight and very drunk version of Hook shows up. He tries to fight Pinnochio, thinking that Emma is in trouble.  Emma knocks him out because he’s basically ridiculous.  They find that Geppetto’s chisel was broken in the scuffle.  The wood could lose its magic without that chisel.

Gold tracks down Gideon to appeal to his good nature. He tells Gideon to hit him.  If Gideon cannot hit Gold, he will not be able to attack the Savior.  Gideon starts to swing at Gold, but retracts saying he doesn’t need any help. 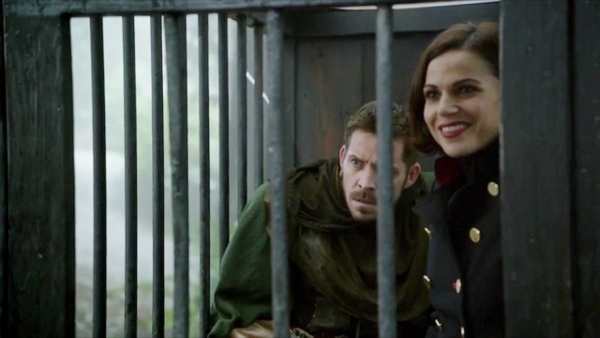 Back in the forest, Regina discovers that this version of Robin is not the same as the storybooks. In this world, he’s just a thief.  And he’s not as happy as he says he is.  Regina mentions Marian.  Robin says Marian died before they could marry.  Robin reveals that his life is not happy.  They are interrupted by Rumpelstiltskin.  Rumpel releases Regina and Robin, but then captures them.  He says he went looking for Belle and only found her bones.  Now he’s going to hurt her even though she’s not the real Evil Queen.

David apologizes to Snow for not waking her up. He says he has to find out who the Villain is and stop him from killing Emma first. Belle shows up and reveals that the villain is her son, Gideon. She explains that Gideon grew up in another realm that affected him but it’s not his fault that he’s trying to kill Emma.  Belle wants to find a way to save both Emma and Gideon.

Rumpelstiltskin locks Regina and Robin in a room together. Regina has already explained to Robin about her world and who he was there. He likes the idea of another Robin living a good life until he finds out that the other Robin is dead. Robin inches in close to Regina but takes a turn. He pulls a nail out of the bench in the room and unlocks the door. 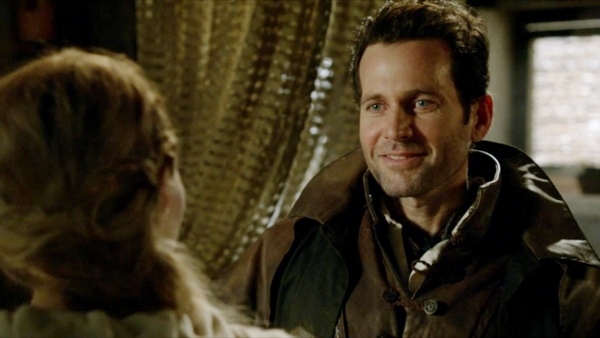 Emma tries to chop at the wood.  When nothing happens, she throws the chisel back in the toolbox.  She sees a box with her name on it.  Emma finds a swan inside the box. She asks Pinocchio about the swan and he says it’s from a story that his father told him. Emma knows the story, it’s the Ugly Duckling.  He says if you believe hard enough in something, you can change your fate. She realizes that the young man in her past that helped her get off of the streets was Pinocchio. She hands him the chisel and says that she believes in him. They go back to the tree and magic happens!  Pinocchio is able to build the wardrobe with magic.

Regina shows up, anxious to leave for Storybrooke.  Robin gives Regina his lucky feather.  She tells him about the feather that the other Robin gave to her.  Emma tells Regina to take Robin back to her, but he’s not real. Emma convinces her that it’s worth a try.  Robin agrees to go.

Emma and Regina make it back to Storybrooke, but no Robin.  Regina is upset that she got her hopes up.  And then another boom occurs and Robin appears in Storybrooke. 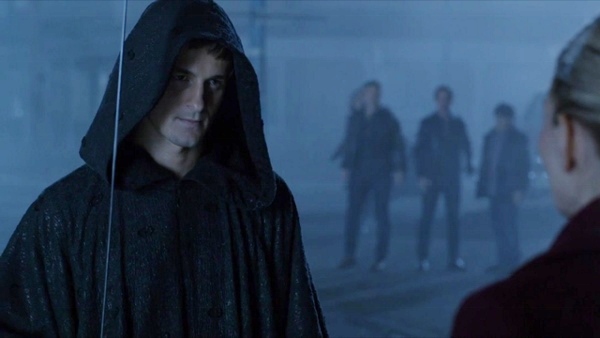 Emma heads back into town when she encounters Gideon.  They start to fight.  David, Hook, and Henry run to rescue Emma.  Gold and Belle try to stop Gideon.  Regina and Robin catch up and Gideon freezes everyone to stop them from interfering.  Emma is able to overpower Gideon.  Gideon vows to kill Emma and disappears.

Everyone is happy that no one got hurt. Belle and Gold walk away from the family reunion that takes place.  The guys are surprised to see Robin.  Emma and Regina explain that he is from an alternate reality.

Later, Emma pays a visit to August or Pinocchio. She tells him that she realized he was the young man who got her off of the streets when she was young. She thanks him for changing her fate. August hands her the story of the Ugly Duckling that she had when she was younger.

Belle and Gold meet up at the wishing well.  Gold admits he was wrong for trying to use the Shears of Fate on Gideon. He didn’t want Gideon to be tied to his fate.  Gold says Gideon still has time to make the right choices in his life.  Belle asks if there is a spell or something that Gold can do to help Gideon. He says no, but if there is a way to help their son, they should do it together. If they fail, war is coming to Storybrooke.

Meanwhile Gideon is in the library at the clock tower, pouting.  In his outburst, he smashes the clock face with magic. 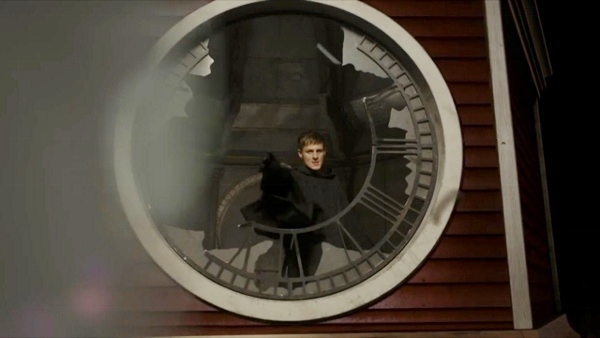 Wow that was an intense return.  It was great to see all of our favorite characters in an alternate universe, especially Hook.  His scene was the funniest. A bumbling, drunk, old pirate trying to rescue Emma from Pinocchio…yeah…let that sink in.

Henry’s alter ego was cool too. The brave young knight out to find his mother and avenge his family.  The writers definitely need to give Henry more heroic duties.

And like any other soap opera, the dead are never truly dead.  Robin Hood is back. But what’s the catch?  Will Regina finally get her happy ending? What if this Robin does not fall in love with Regina?  So many questions…

Foreshadow of a war…Gold and Belle will do whatever they can to protect their son.  Belle even realized how easy it is to rationalize bad behavior. Are going to get to see the Dark Side of Belle?  That could be interesting!

Check out the trailer for next week’s episode, “Murder Most Foul.”