ONCE UPON A TIME Recap (S06E18) Where Bluebirds Fly 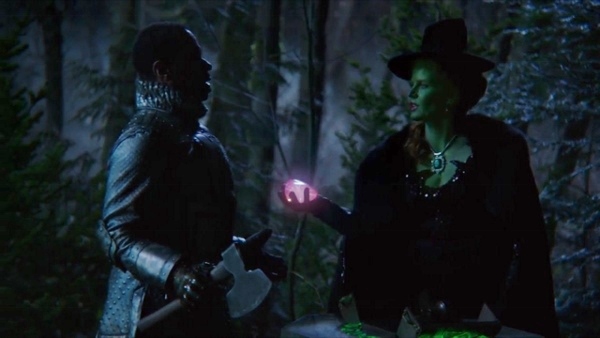 Once Upon A Time, the Wicked Witch of the West, Zelena, made the ultimate sacrifice for good.  Wait, what?  I guess she’s not so wicked after all.

In flashbacks, young Zelena walks along the yellow brick road, where she meets a young wood cutter.  He’s holding a nest with a broken egg.  She uses her magic to save a broken egg.  Two young men approach them and bully Zelena.  The woodcutter comes to her defense.  His name is Stanum. 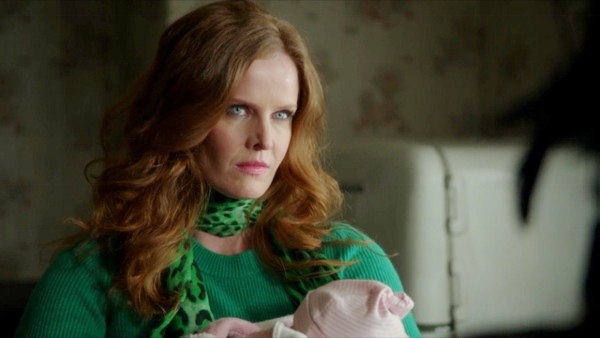 Emma (Jennifer Morrison) and Hook (Colin O’Donoghue) are happy in love again.  They start to get all hot and steamy, and Snow (Ginnifer Goodwin) walks in.  She is very well prepared to plan Emma’s wedding.   They are interrupted by a call from Regina.

Read all ONCE UPON A TIME recaps, here!

Zelena doesn’t want to wait around. She wants to destroy the Black Fairy now.  Regina tells her that she can’t.  Zelena reminds Regina that she is  more powerful.  Everyone else agrees with Regina. They have to confront the Black Fairy together.  Zelena says she won’t help and storms off.

Regina tells them to let her cool off. In the meantime, Regina will do a locator spell on the wand.  And the Charmings will start planning a wedding. 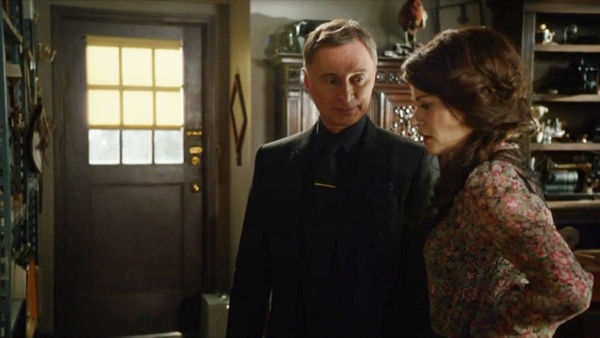 Rumple (Robert Carlyle) tells Belle (Emilie De Ravin) that the Black Fairy took Gideon’s (Giles Matthey) heart. Belle is happy.  This means her son is not evil. It also means they have to fight The Black Fairy to save him.  They have the Blue Fairy aka Mother Superior (Keegan Connor Tracy) in their back room.  Rumple wants to wake her to find out how to defeat the Black Fairy.  He leaves to find how to do that.

Zelana comes in and asks Belle to watch Robin.   She leaves to face the Black Fairy.

David (Josh Dallas) catches Henry (Jared Gilmore) writing with the author’s pen and warns him about trying to change the outcome of the story.  Henry says he couldn’t change it if he wanted to. Emma has to fight the final battle to end the story.  Henry was actually working on trying to translate the gibberish he was writing when his powers took over. David said the best thing Henry can do now is to take a break. They leave to help with the wedding planning.

Zelena is older and wicked. Stanum  (Alex Desert) visits the Emerald City to ask for help. The Witch of the North caught him chopping down a tree in her woods and put a curse on him.  He is turning into the Tin Man.  He asks Zelena to use her magic to get the Crimson Heart to cure him.  Zelena is so bored that she agrees.  While in the woods, Stanum is attacked by a lion.

Regina goes to Gold’s store to get supplies and sees Baby Robin with Belle.  She knows Zelena went after the Black Fairy.  She runs after Zelena and finds her in the mines.  Regina cannot convince Zelena to abandon her plan. Zelena is determined to destroy the Black Fairy because she threatened Robin. 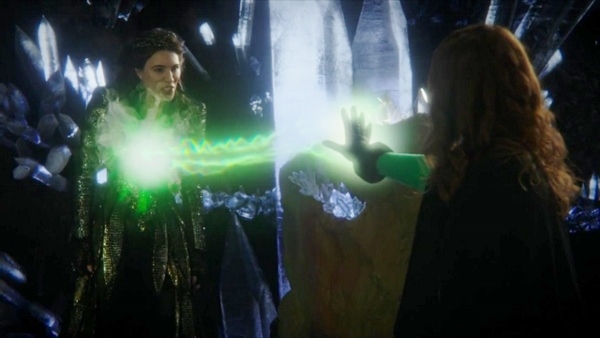 The Black Fairy and Gideon show up.  There is a mini battle between Zelena and the Black Fairy.  Gideon and Regina keep each other company…literally…no battle there.  The Black Fairy lets Zelena think she is winning. In reality, the Black Fairy needed Zelena’s magic to turn the vines of fairy crystals from light to dark.  And she succeeded.

The Black Fairy says that she knew Zelena would make the wrong decision and go after her. Zelena’s magic is unstable because she is so desperate to be accepted by Team Charming that she will do anything to prove herself.  The Black Fairy needed the crystals to be dark so she could start the Final Battle.  She dismisses the sisters after.

Zelena battles with the lion. The lion pins her down. Zelena gets a little help from Stanum.  Zelena hits the lion with her magic and the lion ‘cowardly’ runs away.

Zelena and Regina wake up outside of the fairy mines.  Regina yells at Zelena for causing the Black Fairy to get what she wants.  She tells Zelena to go back to Oz. 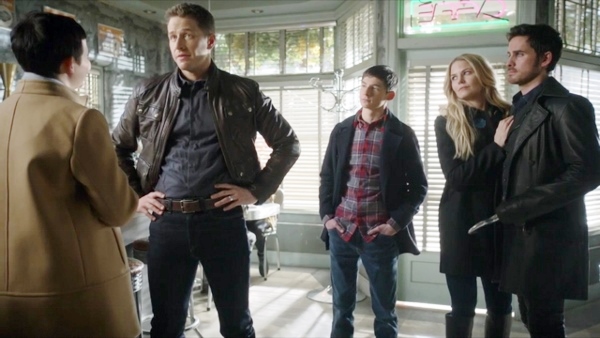 Meanwhile, the Charmings have looked at Granny’s place and the town hall and David doesn’t like any of it. Emma is a princess after all and she deserves a big glamorous wedding.  Snow asks him why nothing is good enough.  No matter where Emma and Hook get married it will be perfect. David asks why she is rushing this wedding. With everything going on, they don’t need to rush into anything.  He doesn’t want Emma’s wedding to be a disaster.  Snow is afraid that they won’t be here to give her a real wedding day.  David tells her to have hope. Emma agrees with David.  They decide to postpone the wedding until they know they cannot be interrupted.

Zelena retrieves Robin from Belle and summons a tornado to return to Oz.

Zelena and Stanum find the Crimson Heart. The second that Zelena touches the heart, it drains her magic. She gets scared and puts it back in its box. She gets angry with Stanum, saying he knew that would happen.  Stanum tries to appeal to her loneliness.  He says she doesn’t need a time travel spell, she needs friends. Her willingness to use her magic for good is what makes her special.  If she leaves him there to rust, she will be along for a very long time.  Zelena doesn’t listen and the tin takes over Stanum.  She says magic makes her special and she wont give it up.

Regina tells the Charmings what Zelena did and the outcome. They aren’t happy with Zelena. Regina says she has it under control and they don’t have to worry about Zelena anymore.

Zelena shows up. She says everyone in Oz hates her. She has no one but Regina. Zelena apologizes for rushing off to meet the Black Fairy like she did.  She says she knows how to fix it.  She gives them the Crimson Heart.

Zelena returns to her castle with the Crimson Heart. She sits down to an empty table and dines alone. 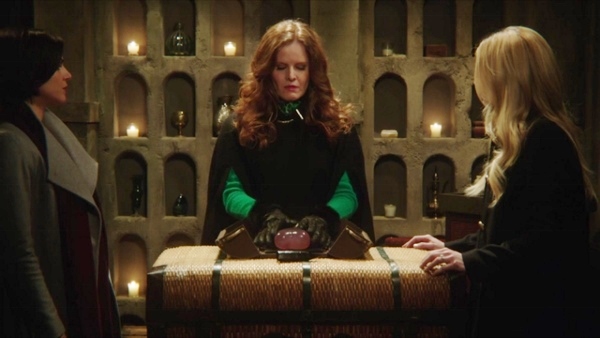 Zelena is scared that something will happen to her once the heart takes her magic.  Regina and Emma promise to take care of Robin if something does happen.  Zelena picks up the heart. It immediately drains her.  Once Zelena’s magic is taken, a flash of green spreads throughout Storybrooke and into the Fairy mines.  The crystals turn bright again.

Emma says they need to talk to the Blue Fairy about getting the dwarfs to mine the crystals. Regina says she can’t get a hold of her. Zelena tells them that Gold has the Blue Fairy in his back room.

The ladies confront Belle and Gold.  They say they can wake her up.  Belle tells Gold to let them try.  They have already missed out on so much time with Gideon.  She won’t let the Black Fairy steal any more of their time with their son.  Gold agrees.

Emma breaks the fairy crystal over Blue. She starts breathing.  She will wake up soon.

The Black Fairy and Gideon are watching from afar.  The Black Fairy is concerned about Blue waking up.   Blue knows the real reason that Black gave up Rumpelstiltskin as a baby. 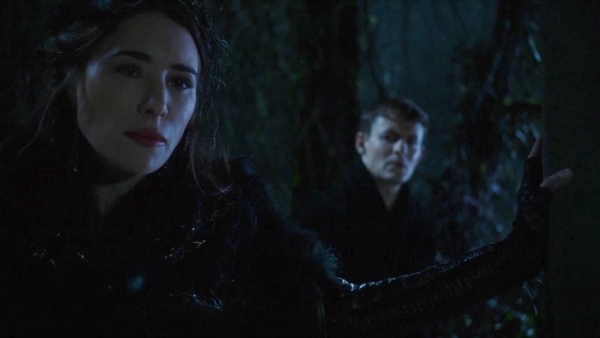 Another filler episode…but interesting because Zelena is powerless now.  What will Oz do without the Wicked Witch of the West?

There’s not much left in the season. The story is slowing moving toward the end.  We will get to see the Black Fairy’s story next week. Then the special musical wedding episode the week after that.  Then the Final Battle between good and evil.  Come on! Why let Emma get married to her one true love Hook then kill her?