Once Upon A Time is getting interesting.  The greatest evil ever known has finally made it to Storybrooke. The Savior is still trying to find a way to save her parents and her beau.  So much is going on! Let’s get to it! 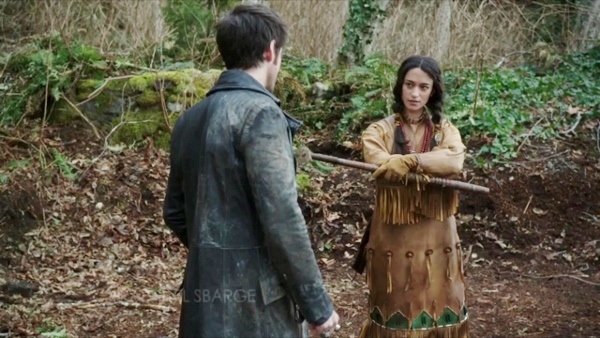 Hook (Colin O’Donoghue) is still running away from the Lost Boys. The Lost Boys want Hook to pay for what happened to Pan. They corner Hook and are ready to attack.  Tiger Lily (Sara Tomko) saves the day and puts all of the Lost Boys to sleep.  Hook thanks her for saving, but that’s not really what she’s doing. She puts him to sleep too.

Regina (Lana Parrilla) and Henry (Jared Gilmore) show Emma (Jennifer Morrison) and David (Josh Dallas) the author scribbling that tells of the Final Battle. David tells them that Gold warned him and Snow abut the Savior fighting the Final Battle.  He thought the Final Battle was breaking the curse in Season One. He tells Emma that they will be by her side no matter what.  Emma and Henry leave to go do some more homework on the Black Fairy.

David tells Regina that they have to break the sleeping curse now. Regina says she may have a solution but she need to test it further.  David tells her to use it.  If it doesn’t work, they will find another way. 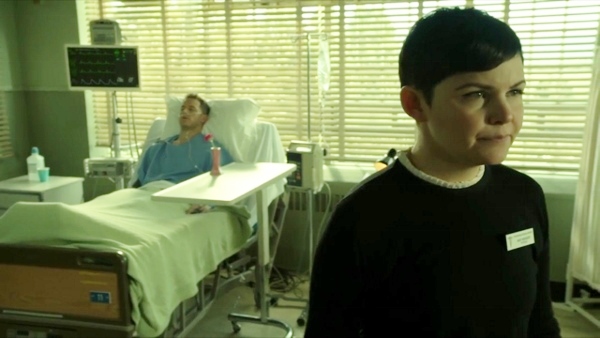 During the time of the Dark Curse, Mary Margaret a.k.a. Snow White (Ginnifer Goodwin), visits John Doe, a.k.a. David Charming in the hospital.  David is in a coma and no one knows who he is. Snow has visited him everyday and Mayor Regina doesn’t like it.  Snow leaves a pink flower by his bedside. Some of the pollen falls on his hand and he wakes up.

David jumps out of bed ready to face the Evil Queen.  Once he realizes where he is, he grabs Mary Margaret’s hand and she remembers who she is.  Snow and David go to find Emma.

Regina gets help from Zelena to break the Evil Queen’s spell.  They remove Snow and David’s hearts to take the magic out and put the hearts back in.  The spellbreaker doesn’t work.  Instead, Snow and David will both be asleep forever.

Snow leaves a message for David and Emma notices the pink flower behind her. The flower has pixie petals. Pixie petals only appear in the presence of evil. 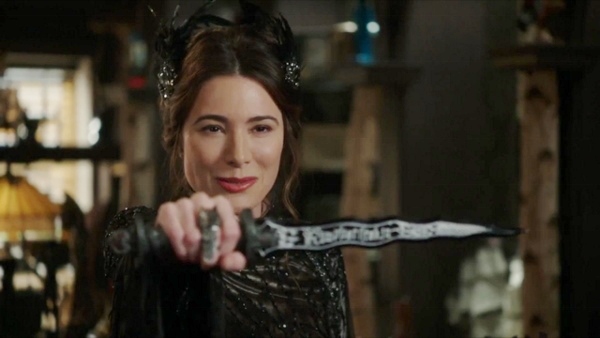 Snow has to hide the fact that she is awake from Regina.  Regina discovers that David has woken up and disappeared. Snow says she saw him walk into the woods.  Regina puts together a search party.

In the meantime, David visits Rumple and asks where Emma is.  Rumple tells David about the pixie flower.  It reunites people who love each other.

Hook wakes up in Tiger Lily’s cave. She says she needs him to deliver a weapon to another realm. He tells her that he has to get home to the woman he loves.  Tiger Lily says that evil is on the horizon.  If Hook doesn’t help her, the Savior could die.  Hook tells her they are talking about the same person.

Hook tells her that he cannot get back to Emma.  Someone put a curse on him.  Tiger Lily thinks Pan may have some magic that could help them get to Emma. They have to go to the Lost
Boys camps to get it.

Regina knows Snow is awake. She tries to test her, but is stopped by the townspeople.  Snow is able to get away from Regina and back to David. 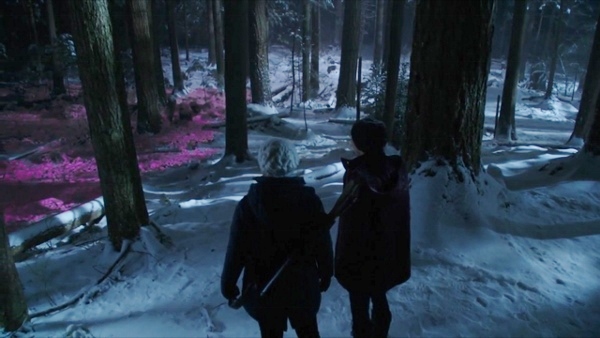 Snow and Emma find a field of pixie petals.  Emma repeats that the petals only show up in the presence of great evil.  The Black Fairy introduces herself to Emma.  The Black Fairy says she created the Dark Curse that Emma was born to break.  They are destined to fight the Final Battle.

Snow tells the Black Fairy to stay away from Emma.  The Black Fairy laughs and Gideon destroys all of the pixie petals. The Black Fairy says it is best for Snow to be asleep. No mother should have to watch their child die.  Snow shoots an arrow at her and they disappear.

Tiger Lily and Hook are waiting for their opportunity to sneak into Pan’s camp. The Lost Boys are not settling down anytime soon.

Hook asks about the weapon that she is giving to Emma. It is part of the most powerful wand ever made.  It’s what banished the Black Fairy to the realm she was trapped in. Tiger Lily tells Hook that she used to be a fairy. She says she is the reason the Black Fairy became evil.  She gave up her wings because she failed.  Hook says he was given a second chance. She could have one too.

Tiger Lily points out a bag that has the magic that Hook needs to get back to Storybrooke. Tiger Lilly distracts the Lost Boys.  Hook sneaks into the camp.   With Pan’s magic, he able to separate from his shadow. The Lost Boys  grab onto Hook’s feet so he can’t get away.  Hook hands the weapon to his shadow and let’s go.

David and Snow find each other and are ready to find Emma. Rumple stops them. He says she’s not ready to be found.  If they get Emma now, everyone in Storybrooke will be stuck in Regina’s curse.  Rumple gives them a potion to take that will make them forget. He says that Emma will find them in ten years.

Snow is devastated that Gideon destroyed all of the pixie petals.  Emma finds one lonely flower.  It survives because it needs to. 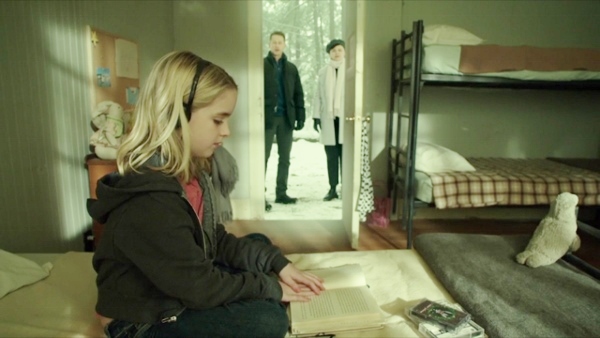 Snow and David use the pixie petal to open a portal.  On the other side is a young Emma. They are overwhelmed to see her.  David heads toward the door and Snow stops him. She tells him they can’t go through or they will ruin everyone’s life.  Everyone in Storybrooke is separated from their loved ones.  She feels like they are responsible.  They have to let Emma become the Savior to save everyone.  They close the door and take the potion to forget.

Regina prepares the pixie dust to be used on Snow and David.  Hook’s shadow appears and gives Emma the weapon from Tiger Lily.  Emma is sad to see the shadow drop a hook at her feet.  She knows Hook is in trouble.

Snow gives her the vial of pixie dust and tells her to use it to save Hook.  They will find another way to break the sleeping curse.

Tiger Lily and Hook are about to be killed by the Lost Boys.  Emma opens a portal and the two escape. Tiger Lily goes one way and Hook goes through the portal with Emma.

Hook and Emma are reunited and don’t waste any time apologizing to each other for everything.  Hook proposes again and Emma says yes…again.

Regina thinks she knows a way to break the sleeping curse. She gathers the townspeople.  She tells them about how the Charmings sacrificed their family for Storybrooke.  Now it’s their turn to save the Charmings.  She has the sleeping curse in a drink.  The curse was meant for one heart.  The plan is to have everyone drink the curse to dilute its power. 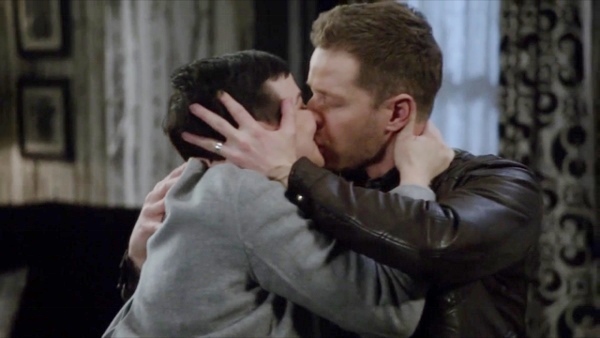 The Charmings wake up at the same time and are alarmed to see everyone on the floor.  Emma looks up and sees her dad. Their family is reunited once again

In the streets of Storybrooke, Rumpelstiltskin meets his mother. He knows she has Gideon’s heart.  The Black Fairy asks how he figured it out.  Rumple says he knows that she ordered Gideon to destroy all of the pixie flowers but he left one alive.  He did it because a part of him comes from Belle. Rumple promises to get Gideon’s heart back. The Black Fairy says there will be nothing left of Storybrooke if Rumple attacks her. He says that’s a price he’s willing to pay.

This always happens. Little bumps in the road become bigger obstacles than they should be.  And there is always an easy fix that just appears or no one really thought of. Regardless, Emma has everyone she loves back in her life…awake.  It’s time for her to focus on the Black Fairy and the Final Battle!

Here’s what we know going forward:

So…the two hour Season Finale is scheduled for May 14. There’s a lot of story to be told…