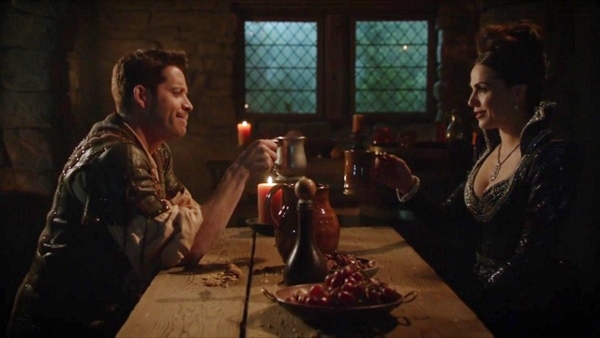 On Once Upon A Time, Regina faces the Evil Queen for the last time.  Hook and Emma are engaged! Will Hook keep his secret?

Last week, The Evil Queen (Lana Parrilla) escaped her snakelike prison.  This week, she uses Robin (Sean Maguire) to carry out her evil plans for Regina.  She plans to use the Shears of Destiny to cut herself away from Regina’s fate.  And then she will destroy Regina once and for all. 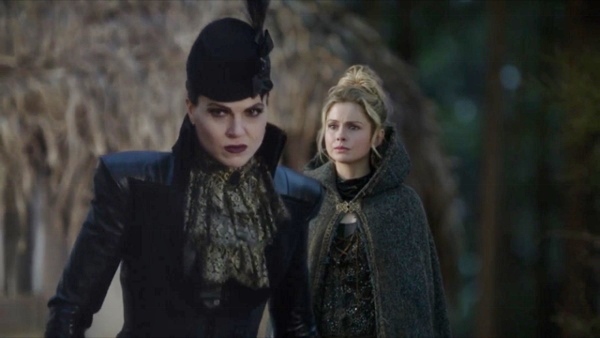 In flashbacks, Evil Regina and her father, Henry Senior (Tony Perez) are searching for Snow White. They stop at every village to search for her.  Regina finds Tinkerbell (Rose McIver) instead.  Tinkerbell tells Evil Regina that she doesn’t care about love. Regina had her chance at happiness with Robin Hood, but she turned away from it.  Evil Regina tells Tink to stay out of her way.

Emma (Jennifer Morrison) tells the Charming family the good news.  Oh Snow (Ginnifer Goodwin) and David (Josh Dallas) are still on a sleep schedule.  Henry junior (Jared Gilmore) is happy about the news though.  Regina (Parrilla) and Zelena (Rebecca Mader) joined the party with news about the Evil Queen.  There was a weird moment when Emma showed Regina the ring…almost like Regina had to force herself to be happy for Emma. And Emma had to force herself to be gracious.

Regina is all business. She tells everyone that the Evil Queen is loose.  There’s some discussion about what she could be up to, but the heroes agree that they have to find her…soon. 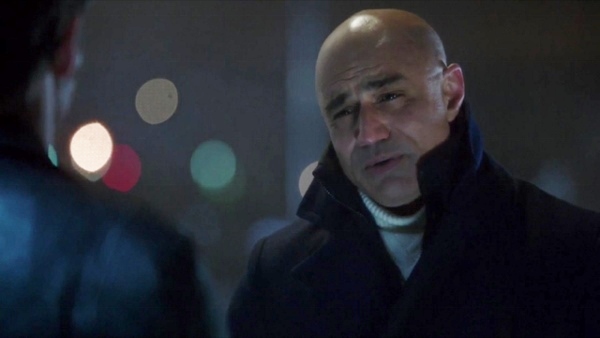 Hook (Colin O’Donoghue) goes to say goodbye to Captain Nemo (Faran Tahir).  He confides in Nemo that he made a huge mistake in his past and he’s afraid that will ruin his relationship with Emma.  Nemo tells him to seek forgiveness, but it won’t be easy.

Flashback…Henry Senior told Evil Regina the same thing.  No matter what she does to Snow White, Regina will never be happy.   Henry Sr. wants Regina to be happy so he offers to help her by giving her a spell book that her mother hid from Regina. 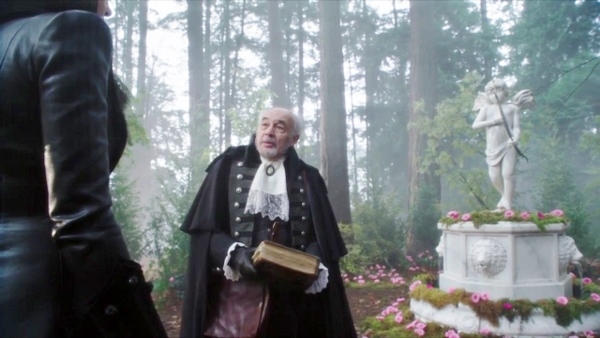 Henry Sr. takes Regina through a secret portal.  He confesses that Tinkerbell actually showed him this place. In the middle of the secret garden is a statue of Cupid with an arrow. That arrow will lead Regina to the person she loves the most.

Regina is angry that her father tricked her.  She’s not interested in finding love. She wants revenge on Snow White. She turns the arrow black and changes its course to lead her to the person she hates the most.

Back to the present, The Evil Queen sent Page 23 to Regina. It is a happy ending that Regina was supposed to have with Robin Hood.  When Tinkerbell showed Regina her happiness, Regina ran from it and became the Evil Queen.  Regina believes that the Evil Queen used the page as a message that she has Robin.  Regina can save him by facing Queenie. 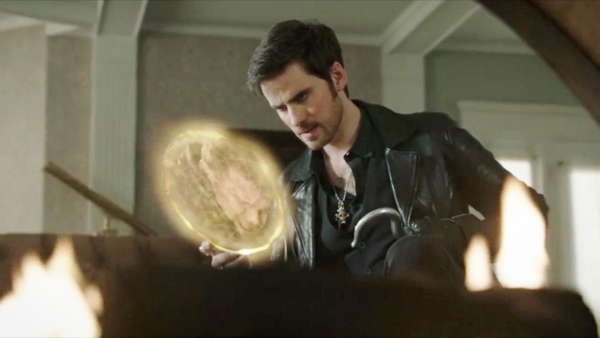 Hook tries to burn his memories of killing Robert.  Emma catches him and they argue.  Hook thinks Emma is mad because of what he did.  Emma is actually mad because Hook didn’t tell her and let them work it out together. Instead he hid the memory from her and tried to cover it up.  That is enough for Emma to give back the ring.

Hook decides that he needs to discover the new man that he is becoming. He turns to Captain Nemo and asks to sail with him. Nemo agrees and tells Hook to prepare to leave the next day.

Regina confronts the Evil Queen. Queenie admits she used Robin to lure Regina so that she could use the Shears of Fate to cut herself from Regina. Regina agrees to the separation. Queenie separates herself and the two Reginas fight.

In the Flashback, the dark arrow leads Evil Regina back to her castle. Regina thinks that Snow White is robbing her and rushes home. Regina doesn’t find Snow White. Instead, she finds the arrow shot to a mirror.  The person Regina hates the most is herself. 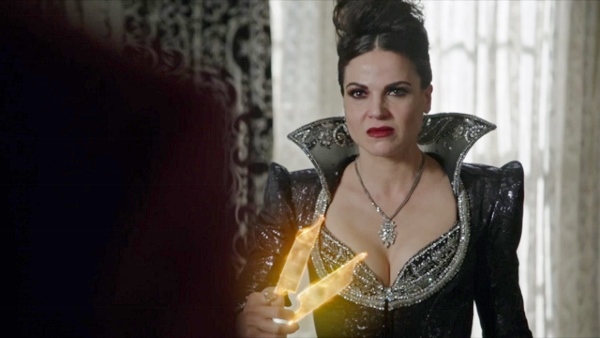 Queenie and Regina’s strength is equal.  Queenie gets the upper hand and then Regina counter attacks.  Regina is able to throw back Queenie and tie her to a post. Regina takes Queenie’s heart out.  Instead of destroying the heart, Regina takes out her own heart and holds the hearts together. She puts some of her love into the Queen’s heart.  Regina also takes some of the Queen’s darkness into her own heart.  She puts the hearts back and the Queen is instantly affected.

Queenie no longer wants to kill Regina. She actually feels remorse for all of the bad things she had done.  She apologizes to Regina.  The Queen tells Regina that she sent Robin back to his land, where he belongs.  Queenie wishes she could get a fresh start as well.  Regina says she has an idea about how to do that.

Regina tells Zelena, Snow, and Henry about the change of heart in the Queen.  She asks Henry to write the Queen a new story.  Zelena and Snow are skeptical.  They don’t believe that the Queen can change that quickly or that she deserves a fresh start. Regina reminds them that she used to be just like the Queen because she is the Queen.  They all gave her a second chance.

The Queen arrives and apologizes to Snow for hurting her.  She can’t take off the spell that she put on David and Snow. Regina says that Queenie told her how to remove it though. 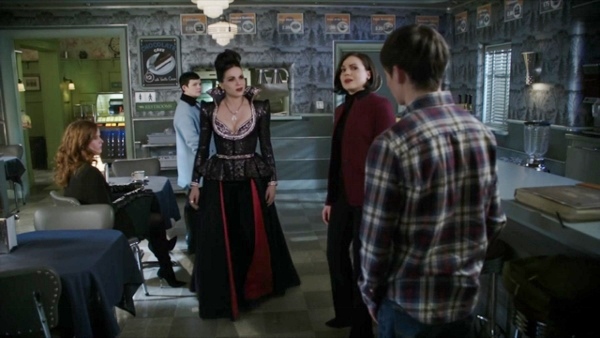 Henry says to the Queen that he knew she could be good and he calls her Mom. (He has 3 Moms!) Queenie is very emotional about being called Mom.

Henry writes the Queen a new beginning. The Queen is transported back to the tavern where Regina first saw Robin. She looks in the window and he’s sitting there.  The Queen enters the tavern and starts her story over with Robin.

Snow congratulates Hook on the engagements. She expresses how happy she is that Hook is the man that Emma chose to spend the rest of her life with. 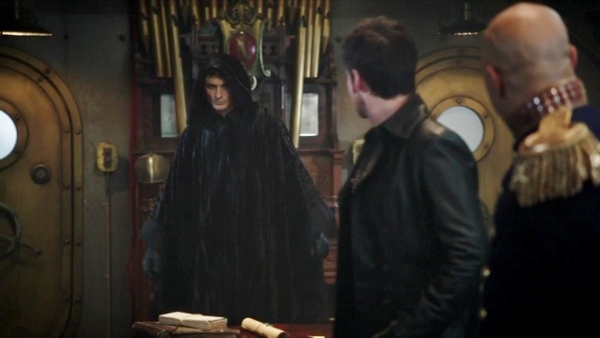 Hook goes to talk to Nemo. He tells him that he decided to stay with Emma.  The submarine submerges. Nemo didn’t give the order, but Gideon (Giles Matthey) did.  Gideon tells Hook that he can’t be in Storybrooke for what Gideon has planned.

Emma sees the submarine submerge. She thinks Hook has left her.

I would have liked to have seen the Evil Queen defeated differently.  In the fairy tales, the villain is always either killed or run out of town.  Regina should have absorbed Queenie back into her. It would have been, like, Regina accepted her evil past and her dark side, but she can control it.  I understand that this way gives the Evil Queen a happy ending…the same happy ending that Regina lost.  And that bothers me. It’s still Regina and Robin.  Why not give our Regina her happy ending!?  And who’s going to entertain me now that the Evil Queen is gone?

I was proud that Emma wasn’t angry that Hook killed Robert.  She was more upset that Hook would hide his past from her and run from it instead of telling her the truth and facing her family.  Forgiveness isn’t easy, but it’s definitely worth the risk.  Hook learned that a little too late though. Now he looks like a coward and Emma is once again heartbroken.

Can we get a musical episode?

Next week: Aladdin and Jasmine help Hook find his way back to Emma.