Once Upon A Time Recap (S06E13) Ill-Boding Patterns 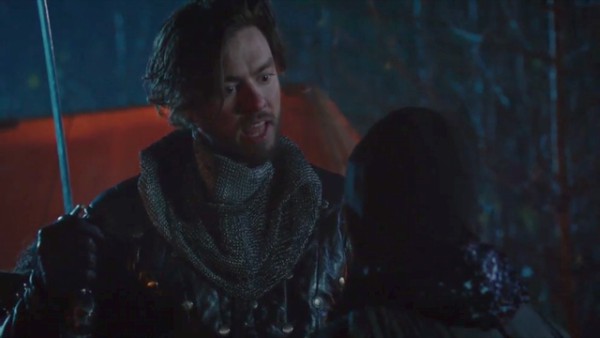 This week on Once Upon a Time, Rumplestiltskin tries to save Gideon from darkness.  Hook struggles to tell Emma the Truth. Emma discovers Hook’s secret.

So it turns out that the sword that Emma (Jennifer Morrison) wields, used to belong to the legendary Beowulf (Torstein Bjørklund).  In flashbacks, Beowulf was the leader of an army of men fighting a troll army.  This is the war that Rumpelstiltskin (Robert Carlyle) ran away from to be with his son.  Rumpel returned to the battle and defeat the troll army, saving Beowulf’s life in the process.

Last week, Hook (Colin O’Donoghue) found out that he killed David’s (Josh Dallas) father.  He didn’t know that was his father when he killed him. Hook wants to ask Emma to marry him.  He already has David’s blessing.  Now he has to decide whether or not to tell Emma about his evil deed.

Archie (Raphael Sbarge) finds Hook and sees that all is not well.  He assumes David did not approve of the marriage.  Hook says he has a secret that could destroy his relationship with Emma. Archie encourages Hook to be honest with Emma.

Rumpel/Gold Belle (Emilie De Ravin), and Blue(Keegan Connor Tracy) are out looking for Gideon (Giles Matthey) to find a way to get through to him. Gideon wants to kill Emma, the Savior so he can become the Savior.  He needs that power to save the world he grew up in. That world is currently under the tyrannical reign of the Black Fairy, Gold’s mother. 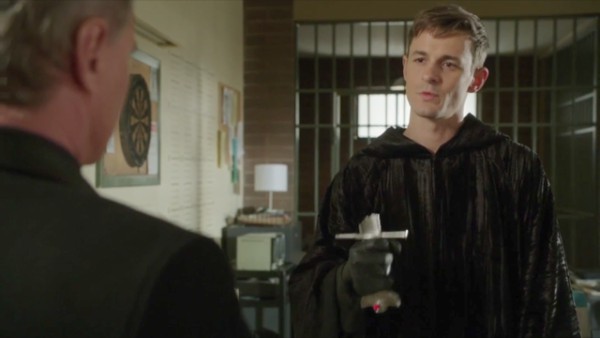 Gideon is at the police station to steal the Emma’s broken sword.  Gold catches him and knocks out Gideon before he can escape. Gideon wakes up in the clock tower tied to a chair.  Gold tells him that they need to have a father-son chat.  He tells Gideon that giving into darkness will only lead to more darkness.  The hero that Gideon is trying to be will not exist if he gives into dark magic.

It seems that Gold has been in this situation before.  In the past, Rumpelstiltskin and Baelfire (Brandon Spink) are at Beowulf’s village.  Baelfire is disappointed that Rumpelstiltskin used Dark Magic to win the war.  Rumpel promises to never use it again.  Beowulf hates that the Dark One save him and his village.  He promises to expose the Dark One and his dark magic.

Regina (Lana Parrilla) looks for Robin (Sean Maguire) and finds him in the woods. She apologizes for overwhelming Robin by forcing him to adjust to a new world.

Flashback…Baelfire is being bullied by the village kids.  Rumpelstiltskin doesn’t like it.  He made a promise to be good though.  The people tell him that Grendel is on the loose.  He tells them he will not use dark magic. They insist that he help them. Baelfire tells Rumpel that they can defeat Grendel without magic. 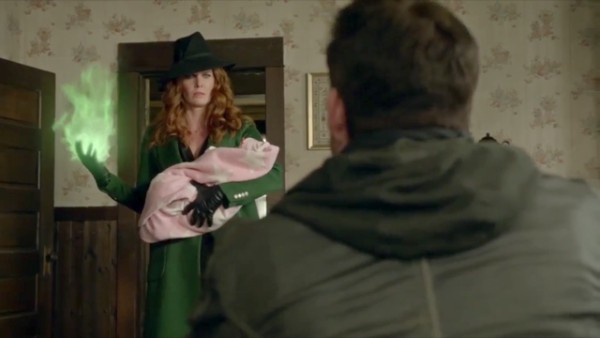 Zelena (Rebecca Mader) finds Robin in her kitchen and thinks he’s there to take the baby.  He assures her that he doesn’t want her brat. He wants her to help him escape Storybrooke and Regina. Robin says he came to this world to start over. He is a thief and wants to remain that way.  Robin took magic from Regina’s vault and asks Zelena to use it to break the barrier.  Zelena is desperate to escape Storybrooke as well and agrees to help.

Gold asks Gideon what the Black Fairy did to him.  Gideon doesn’t trust Gold, especially since he tied him up.  Gold unties Gideon.

Gideon tells him a story of how the Black Fairy caught him reading the book that Belle gave to him.  To punish him, the Black Fairy beat another kid.  She left Gideon’s door open so he could stop her.  Gideon didn’t help.  He just sat in his cell and listened.

The Black Fairy told him he could never be a hero.  Gideon wants to show her that he and Gold are both strong enough to be heroes. 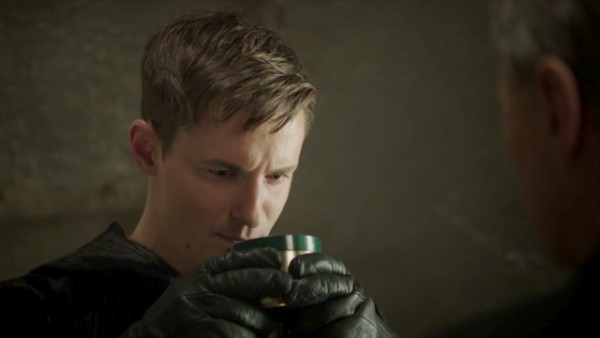 Gold hands Gideon a cup of tea.  Gideon realizes the tea is spike with magic. Gold tells him is a memory spell. He wants Gideon to forget everything the Black Fairy did to him.  Gideon is one step ahead of Gold. He has on a bracelet that prevents spells from working on him.  He also takes the Dark One’s dagger and commands him to help him.

They are caught off guard when Beowulf tackles Baelfire and takes the dagger. Rumpelstiltskin figures out that Beowulf made up the story and set up the Dark One as the monster. Beowulf forces Rumpelstiltskin to remain in the cave.  He leaves to go tell the villagers.  Baelfire goes after him.

Zelena and Robin are all ready to leave.  She even brought Queen Cobra (Reminder: Gideon turned The Evil Queen into a snake when arrived in Storybrooke).  Zelena is about to use Regina’s magic and Regina shows up. 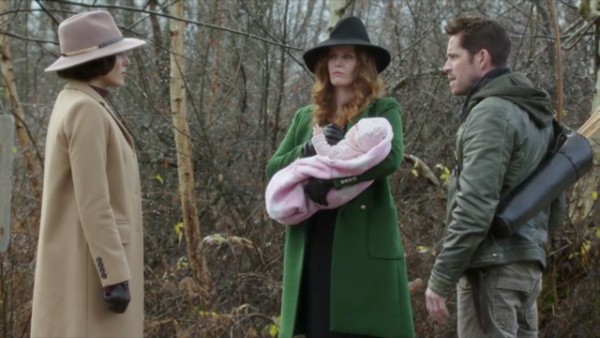 Regina tells them that her magic doesn’t work on the barrier, she’s already tried.  She apologizes again to Robin for bringing him to Storybrooke. She says she will help him get out of town.

Baelfire catches up with Beowulf, gets the dagger back and uses it to summon the Dark One.  After some goading from Beowulf, Baelfire commands Rumpelstiltskin to kill Beowulf.  Baelfire has gotten a taste of dark magic…and he likes it. They go home and Rumpel gives Baelfire the memory tea to save him from darkness.

In the present, Gideon holds the dagger and commands Gold to tell him how to fix the sword.  Gold tells him that it can only be repaired with the blood of the one who made it….the Blue Fairy…Gideon’s Fairy Godmother. 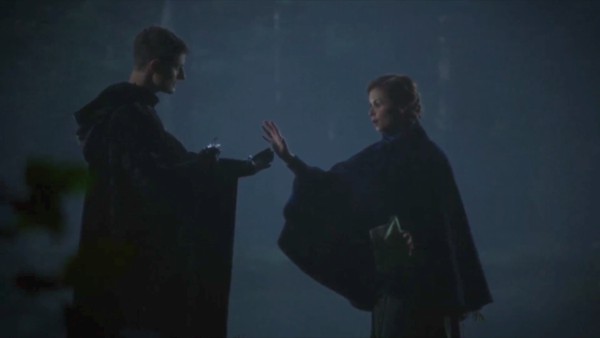 Gideon and Blue find each other.  He freezes her so he can take her blood. Gold stops him. He says he will cut Blue to save Gideon from Darkness.  Gold uses the broken sword to cut Blue’s hand. She freezes and the sword is repaired. Gideon gives the dagger back to Gold for helping him.

Belle is not happy with what happened to Blue.  She is happy that Gold was able to protect Gideon.  His dedication to his son gives her hope for both of them.

Back to Hook and Emma… 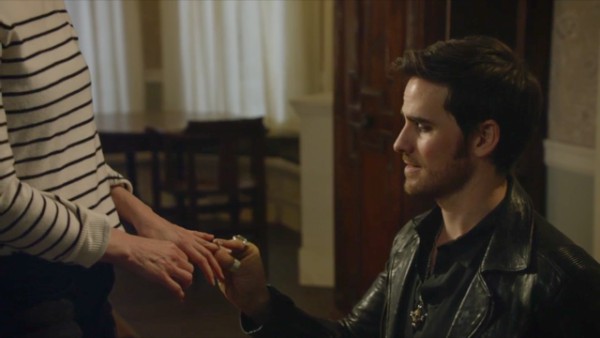 After several drinks Hook decides to tell Emma the truth about killing David’s father.  She stops him by telling him she already knows his secret. And her answer is yes.  Hook is confused. Emma explains that she found the ring in his things.  Hook gets down on one knee and asks Emma to marry him. She says yes.

Zelena goes to apologize to Regina. Regina says she is the one who should apologize. She was foolish for thinking that she could get rid of her evil side.  Evil is a part of who she is.  She has to take responsibility for everything the Evil Queen…everything She has done.  Regina removes the cover from the cobra cage and the snake is gone.

Robin is alone in the woods when he sees the cobra inching toward him.  The cobra snaps at Robin and immediately turns back into the Evil Queen.  She says that there was a drop of Regina’s magic on his hand.  She is very excited about returning to her true form.  She’s also excited to have a new Robin in Storybrooke. 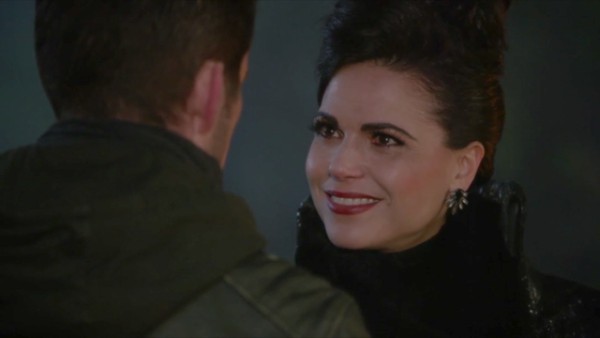 Next Week:  The Big Showdown between Regina and the Evil Queen.