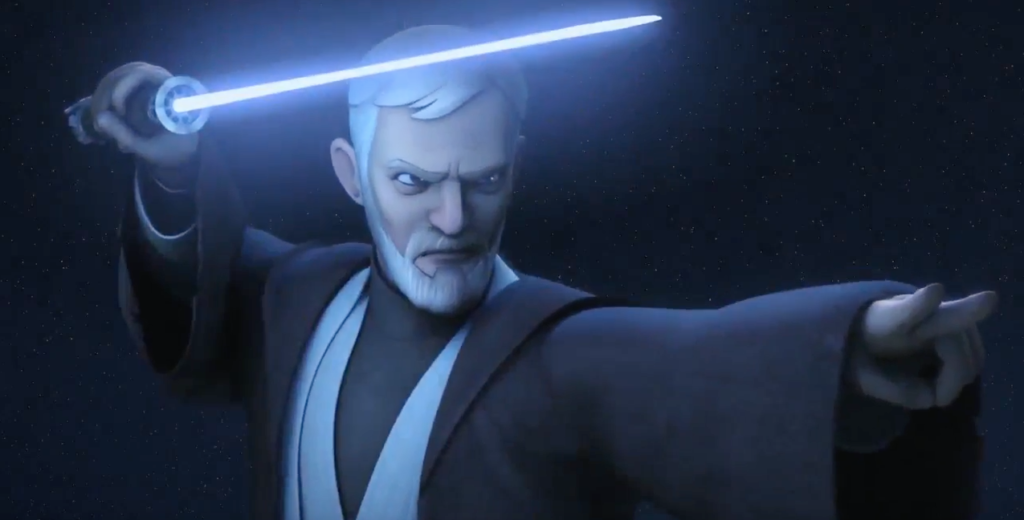 Star Wars Rebels has been hitting it out of the park recently, bringing back Thrawn, Ahsoka Tano, Darth Maul, Saw Gerrera, and now Obi-Wan Kenobi.  While we saw the surviving Jedi Master through hologram in the opening episode, it was an old recording, warning Jedi to stay away from the temples.  Now, the older Kenobi is making an appearance.

When Rebels first made it onto the scene it had a lot to live up to, namely Clone Wars.  It was impossible to not draw comparisons and, in the beginning, Rebels was generally found lacking.  Enjoyable, to be sure, just without the depth of Clone Wars.  Of course, lest we forget, Clone Wars started out shaky as they, too, had to find their footing.  It eventually grew into something that would rival the Prequels, if not surpass them.

Well into its third season, Rebels is telling the kind of stories that made us fall in love with Clone Wars.  The show is filling in details of those 19 years between Episodes 3 and 4, giving us some closure with the suddenly canceled Clone Wars.  The crew, at least part of them, even made it into Rogue One albeit in the background.  Lucasfilm is letting us know Rebels is part of the wider universe in more ways than one.

Which brings us to Obi-Wan.  Right now there is a huge gap between when we last saw him in Revenge of the Sith and then again in A New Hope, those aforementioned 19 years to be exact.  While Kenobi existed in the old Expanded Universe, now Legends, he has been conspicuously absent from the new Expanded Universe.  First it was rumored his would get his own Star Wars spin-off movie, with the goal to fill in those missing years.  Without any official announcement, those hopes are withering on the vine.  However, recent rumors have surfaced that the reason we aren’t getting a stand alone movie, yet, is because the main Star Wars story is not done with him yet.

“I have heard rumors that the one reason they haven’t moved sooner on Obi-Wan is that they’re not done with Obi-Wan quite yet in the Saga films. So I wouldn’t be surprised to see an Obi-Wan [solo film] happen beyond Episode IX.”

Perhaps this Rebels appearance is just the beginning.  Maybe this is paving the way for him to appear in either Episode VIII or IX.  Either way, it’s good to see him back on screen.