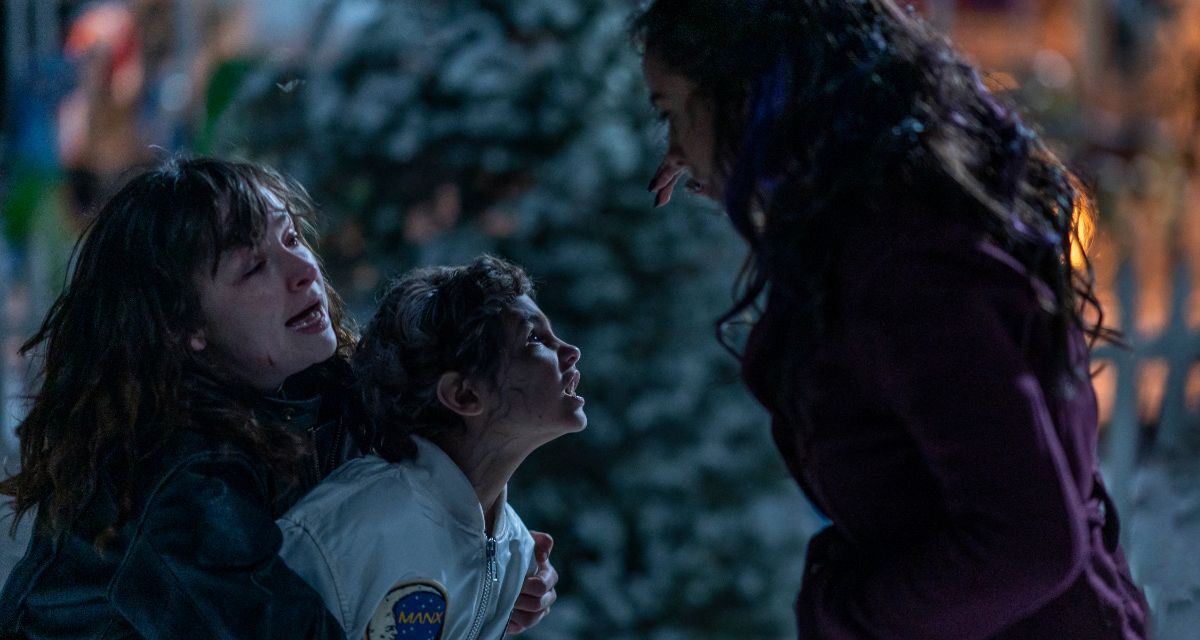 Christmas is over on NOS4A2. In “Bats,” Vic McQueen (Ashleigh Cummings) makes her final stand against Charlie Manx (Zachary Quinto).

RELATED: Read the Latest Recap of NOS4A2, “Welcome to Christmasland”

Vic and Wayne McQueen (Jason David) watch as the lights go out on Christmasland. She makes up a new game. First to find her motorcycle gets to go for a fast ride. They start searching and find Maggie (Jahkara Smith). Maggie is searching for her tiles. She wants to look while Vic returns Wayne to the real world. Besides, only two people can fit on the bike at once.

Vic gets Wayne across the shorter way with ease. Lou (Jonathan Langdon) waits for them on the other side and hugs Wayne tightly when he sees him. Wayne sees Tabitha (Ashley Romans) and gets aggressive. Lou has to hold him back while Tabitha handcuffs him. She asks about Maggie, and Vic promises Maggie is alive and she’s going back for her. Vic leaves, and Tabitha is shocked by the bridge that appears.

Maggie gets tired and lays on a rock. The kids find her and say she needs a doctor. A boy in scrubs says they will have to amputate something. Vic arrives and scares the kids off. She picks up Maggie, and they head for the motorcycle. Charlie shows up in the Wraith and stares at them for a moment. It’s chase time. The Wraith chases the Triumph through the park.

Vic and Maggie make it to the bridge with Charlie close behind. Vic stops, saying they are leading him to their loved ones. This is her endscape and Charlie Manx isn’t leaving the bridge. Vic concentrates and the bats start flying at the Wraith. Maggie sees the boards in the bridge start to break.

Lou does his best to hold Wayne back, but stops when they hear kids screaming. Wayne kicks him and gets away. They find Wayne humming in front of his bat ornament. Tabitha says some people believe souls can get trapped inside of an object. Lou remembers Maggie’s tiles saying the kids can be saved “when souls fall.” The kids’ souls are in the ornaments. They’re horcruxes! Lou grabs Wayne, and Tabitha takes the ornament. She smashes it with her foot and Wayne screams out in pain. Wayne throws up as Tabitha smashes more ornaments. Lou asks her to stop but she says it’s the only thing saving Wayne’s life.

Charlie starts driving toward them. Vic concentrates harder, and the bats start swarming around the Wraith, slowing Charlie down. The bottom of the bridge gives out, and the Wraith falls into a hole. Maggie and Vic watch the Wraith fall into static and Charlie Manx with it. The bridge starts to completely fall apart. Vic and Maggie jump on the bike and ride to the edge.

Wayne runs to his mom, all back to normal and happy to see her. Lou is behind him and starts crying. Tabitha holds on to Maggie while she calls for backup. Maggie sees all of the broken ornaments and looks at Tabitha. She explains by saying “when souls fall.” At that moment, they see a child come out of the trees, asking for Father Christmas. Mike Demeter (John James Cronin) walks out asking for his dad. Tabitha makes another call to bring Social Services. Millie (Mattea Conforti) is nearby and watches. She seems upset that the children are free and Christmasland is gone.

Vic takes her family back to Colorado, but things have changed. Wayne isn’t eating. He gets easily angry and acts out more often. Lou says everything will be okay, but Vic isn’t so sure. He knows it took her some time to get over Charlie Manx, but they are safe now. They just have to give it time.

Maggie gets her tiles back. Tabitha brings them to her, saying one of the children had them. Some of the kids still have families and are taken home. The others are put into foster care. Tabitha says those in foster care are having a hard time adjusting. She starts to leave. Maggie offers to answer any questions she has with her tiles, but Tabithia is not interested and says goodbye.

Vic stops drinking. She starts drawing again and stays up late creating a robot to protect Wayne. Before she goes to bed, she hears something in the living room. She finds Wayne standing on the counter in the kitchen, eating sugar. He says eating sugar for dinner is fun. Vic tells him to put the sugar down and Wayne snaps out of his mischievous trance. He apologizes, and Vic says it’s okay.

Wayne and Vic brush their teeth. When Wayne spits out his toothpaste, he also spits out blood. He asks Vic if he’ll ever be okay. She says he will. He asks if she was all the way better after Charlie Manx hurt her. She says yes, but with hesitation.

Wayne goes to sleep but has a dream about a dead rabbit, Lou laying in a pool of blood and Vic’s head on a tree. He sneaks out of the house and rides his bike to the Sleigh House. He walks around in the trees and finds a dead rabbit like the one in his dream. Something shrieks nearby and he runs to find it. He finds Millie, eating a rabbit.

Wayne admits he misses Christmasland. Millie says there’s nothing like living in Christmasland. Now she has to sleep outside and hunt for food, and she will never see her father again. Wayne apologizes for his mom killing her father. Millie is lonely, so Wayne suggests she break her ornament and be a real kid like him. Then someone could adopt her, but Millie doesn’t want to be weak or ordinary. They talk about growing up, but Wayne says all grown ups do is work and worry about paying bills. They pretend they are happy, but really, they are just tired.

Millie decides to keep her ornament and says she will rebuild Christmasland. She wants to bring back all of the children. Millie asks Wayne to help her. Before he can answer, they see car lights approach. It’s Vic. Millie is scared that she’s there to kill her. Wayne doesn’t think so, but he’s sure his mom will break Millie’s ornament if she sees her. Millie tells Wayne to remember her and runs away. Neither Wayne nor Vic know why they ended up there, but they decide to go home.

Three kids find Charlie Manx’s body in a lake. His body is cremated and his car will be demolished. Vic and Lou are in Haverhill to help Linda (Virginia Kull) pack up Chris’ things. They talk about motherhood. Now Vic understands where Linda was coming from. Linda asks them to stay to heal.

They meet Maggie and Tabitha at a junkyard to watch the Wraith get smashed. Tabitha thinks it’s weird that the car showed up in Haverhill. Maggie explains it’s because he was in Vic’s endscape, which originates in Haverhill. Manx’s endscape is in Colorado. Manx’s body was cremated, which means it’s all over.

Maggie and Vic talk over coffee about their victory. Lou is officially adopting Wayne, and they are staying in Haverhill. Maggie wants Vic to explore with her. She wants to know how many other endscapes there are in the world of thought. Vic puts her motorcycle in storage and has no plans for another adventure. This is her happy ending.

Maggie tries to convince Vic to explore with her, saying she is a strong creative. But the only creative thing Vic is going to do is draw. Maggie knows not every endscape is like Christmasland. Her tiles have told her about many places. Vic isn’t going to stop her from exploring.

OKAY TO NOT BE OKAY

Wayne draws a picture of him and Millie in Christmasland. He is coloring it when Vic and Lou knock at the door. Wayne asks when they are going home, but Lou says they are staying for a while. Wayne says he misses his friends, but Vic thinks he misses Christmasland. She tries to get him to talk, but he doesn’t say anything. She spots the picture under Wayne’s pillow. At first Wayne doesn’t want her to see it, but she coaxes him into letting her.

Wayne thinks there’s something wrong with him on the inside. Vic says it’s okay to feel that way. She feels that way sometimes, too. That’s why she ran away. From now on, none of them can run away and they can’t pretend they are okay when they’re not. From now on, they are staying in the real world.

Maggie takes out her tiles and asks them how to get to the world of thought. The tiles answer “hotel.” Maggie goes to the same hotel where she met The Hourglass, and the lights start to flicker, leading her to an elevator. Without touching anything, the elevator doors open and Maggie steps in. There is only one button to push. Maggie pushes it and rides the elevator to wherever it takes her.

Vic examines Wayne’s picture at the kitchen table. She goes to the stove and pulls down a jar of art supplies. She turns the picture over and starts drawing.

Back in Gunbarrel, Colorado, a young couple drives up to the Sleigh House. They hear something banging on the truck. Millie jumps on the truck and reaches into the truck to kill them.

RELATED: Catch Up on the NOS4A2 Recaps Here!