Nick Blood Is Returning for AGENTS OF SHIELD Season 5

Yes, you read that correctly, Agents! Nick Blood, who portrays the sardonic former mercenary Lance Hunter, will once again be reporting for duty for Agents of SHIELD Season 5. Entertainment Weekly first reported on Blood’s reprisal of the role, complete with an official photo of the actor on set.

Blood made his Agents of SHIELD debut during Season 2 of the Marvel series. Lance Hunter was a mercenary brought in by colleague and friend Isabelle Hartley (Lucy Lawless). After Hartley’s untimely passing, Hunter continues his tenure with SHIELD, forming close bonds with all of his fellow agents. Not to mention, his dry wit injected a necessary dose of humor into the usually serious show.

Later, Blood made his departure from Agents of SHIELD in Season 3 alongside Adrianne Palicki, who played Bobbi Morse (you may also know her as Mockingbird in Marvel Comics). The pair was set to have their own spin-off titled Marvel’s Most Wanted. Unfortunately, said spin-off fell through the cracks, sentenced to TV Purgatory.

Now, we only know of Blood’s return to Agents of SHIELD. Palicki is currently starring in Seth MacFarlane’s The Orville. Chances of her reprising her role are very slim. While I thoroughly enjoyed Blood and Palicki’s sizzling chemistry, I’ll take one over none. Blood not only provided humor for our agents, but he gave Hunter much needed layers and a nuanced performance, to boot.

Alright, Agents, the proof is in the pudding! Check out the official image below of Nick Blood’s triumphant return. With how SHIELD ended last season, what part do you think Hunter will play in all that? Is Blood only returning for one episode or a recurring arc? Marvel gods, can we please promote him to series regular again? Guess we’ll have to wait patiently until Agents of SHIELD returns.

Agents of SHIELD will return for Season 5 in late fall of 2017 on your ABC affiliate. 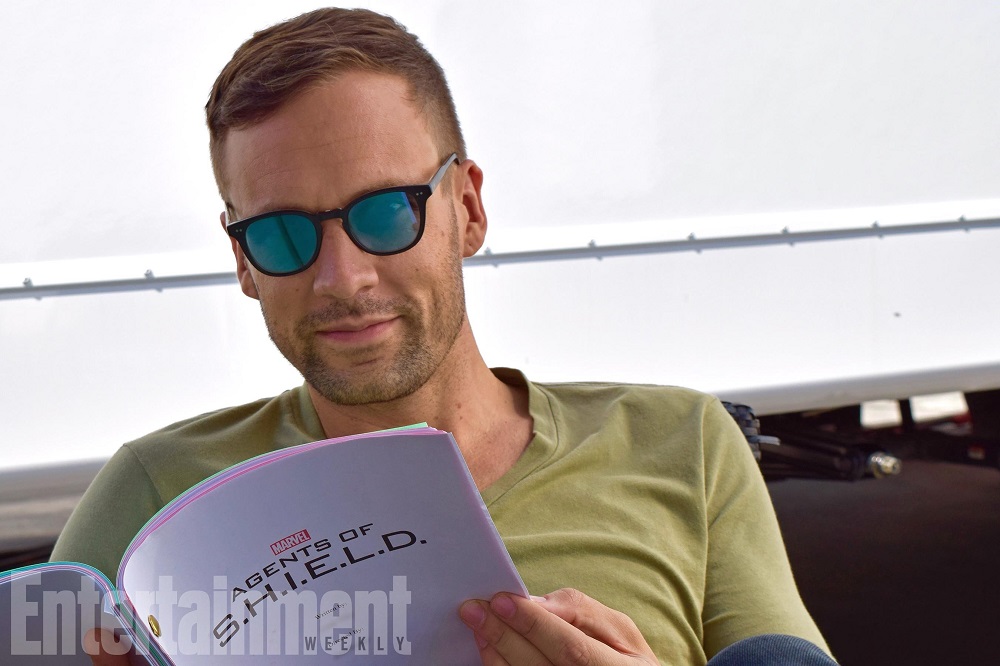 Pictured: Nick Blood on the Agents of SHIELD set. Look at him, being cheeky and keeping secrets from us.