Home » Games » New to SMITE? Quick Player Guide with Everything You Need to Know!

New to SMITE? Quick Player Guide with Everything You Need to Know!

So you are new to SMITE and have no idea where to start. Well you, my friend, are in the right place! This is a helpful guide for all the things the tutorial left out or just expected you to know before tossing you right out on your butt. SMITE is a multiplayer online battle arena (or MOBA for short) where you take control of a God from several different pantheons and wreak havoc against the other team. What really sets SMITE apart from other MOBAs is its beautiful third person view which helps immerse the player into the game. It also features several different game modes varying from your typical three-lane conquest to an all out battle arena.

Related: BlizzCon 2017: Two New Heroes and 2018 Updates Announced for HEROES OF THE STORM

Now a game would be nothing without the Gods you can play. SMITE offers 5 different classes you can choose from. A good match composition would be a God from each class that work well together.

Each God either has a ranged or melee basic attack. Some Gods, like Izanami, have a basic attack that has some additional attributes. Her sickles hit twice (when they first strike, and then when they come back) and can hit multiple targets at a time. Many Gods have kits that are built around buffing their basic attacks.

On the other side of the spectrum, we have Gods who are all about their kits. These tend to be Mages and Guardians and the more you combo these abilities together the more damage or help for your fellow teammates you can pump out. Each God kit has five things that differ from God to God. It starts with one passive ability, then three enhanced abilities that range from CC, a steroid buff, burst damage, or another ability, and ends with a God’s ultimate, the strongest ability each God has. When you hear a caster say something along the lines of “They used their three…” they are referencing their 3rd ability.

You can power up each ability further by gaining levels in each match. You can set this to auto-learn when you are just getting started with a new God, but I recommend turning this off so you have better control of which abilities you build up faster. 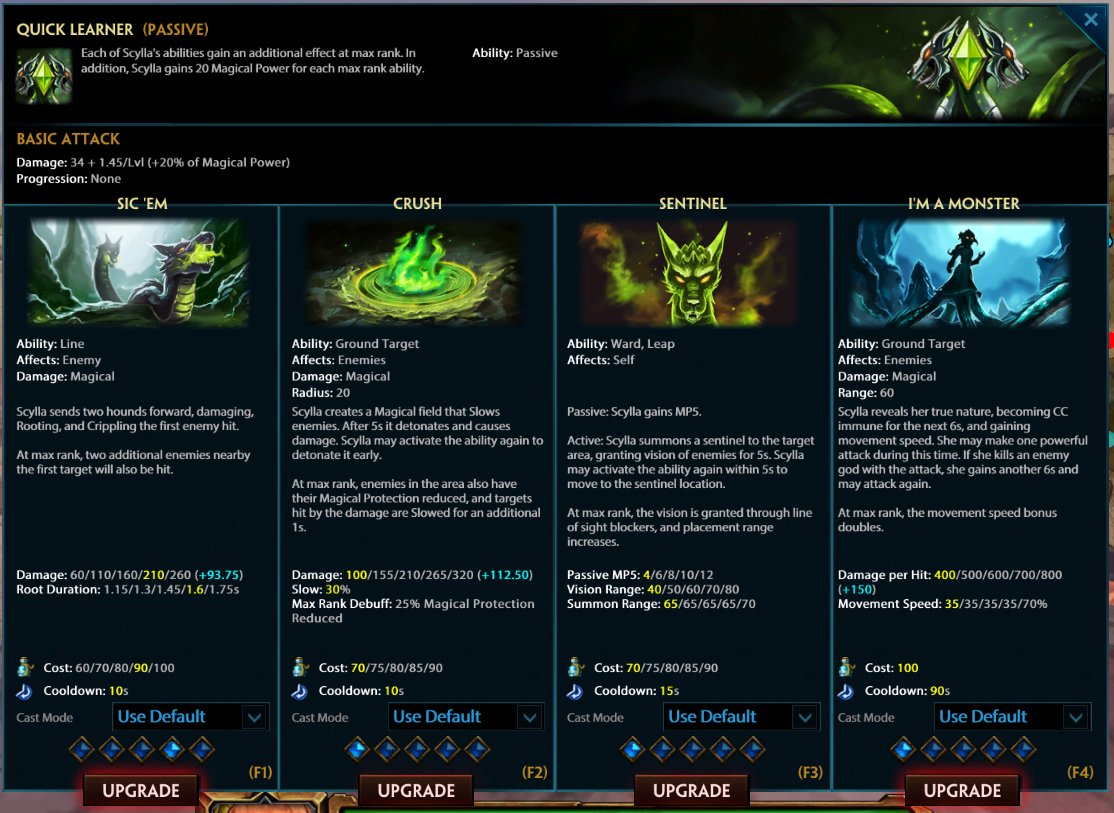 Now these abilities are great and all, but what really helps to build a God through a game is the items you can purchase. Each time you kill a minion, God, or clear an obstacle like a tower or phoenix you receive gold. This gold is spent on items that can affect several different things like attack speed, cool down time on abilities, power, magical damage, protections, and armor. You can leave this set to auto-purchase which will purchase an item each time you return to base when you have enough gold.

Once you have gotten a feel for how the inventory works, I would recommend turning this feature off. Similar to abilities, by purchasing everything on your own you can adjust how each build will go. You might find that you have great defense and don’t have to build any defense but the next time you might be the target of the other team’s heavy hitter and need to adjust your build.

The two tabs that appear in the inventory screen are: recommended and all items. When you are ready to turn off the auto-purchase, I would start using the items under recommended and then move into picking out items from the other tab once your are completely comfortable with a God.

SMITE uses terms similar to other MOBAs, but I have come up with a list that I wish I had known when I first started playing.

I hope this quick guide is helpful! If you already play, what advice would you have for new players coming to the game? What are your favorite Gods to play and whom do you think are the easiest to learn?