As some of you may know, there’s a new series coming out from Marvel Television, distributed on Hulu, based on the Brian K. Vaughan series, The Runaways. The series will hit the streaming platform on November 21st and, by all accounts, will stick relatively close to the source material, which is honestly great. Brian K. Vaughan almost single-handedly created a completely new team of heroes that have know been disseminated into the greater Marvel mythology; Molly Hayes, Molly Hernandez in the TV series, has teamed up with the X-Men; Nico Minoru and her mother, Tina Minoru, are now part of the mystic side of Marvel, both of them having worked with Doctor Strange.

All that being said, The Runaways comic is great storytelling from beginning to end and now we have a TV series based on it hitting our televisions (and internets) in a month. 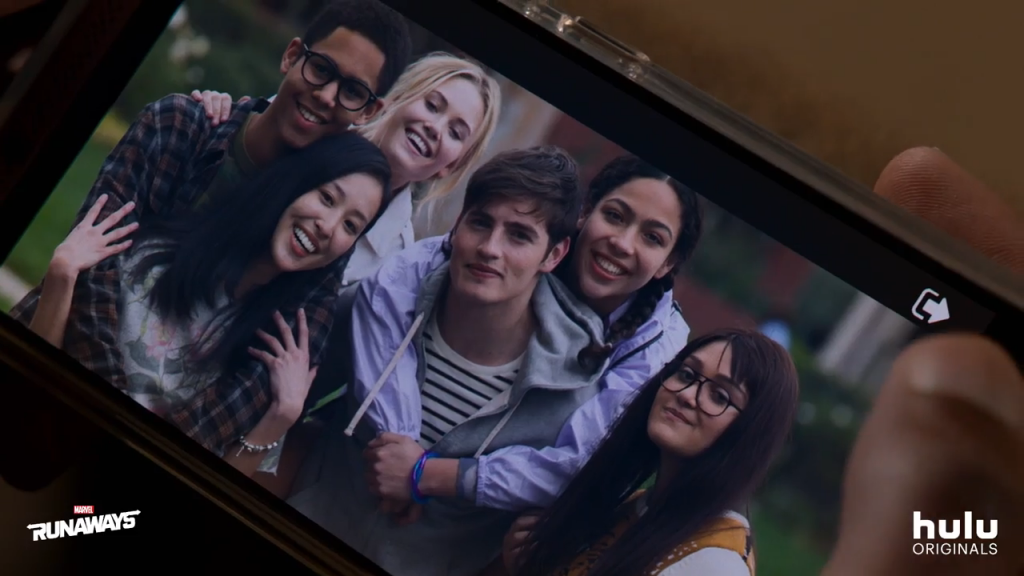 And Marvel released a new trailer for the series today and it will make you even more excited.

The trailer starts with Alex Wilder (Rhenzy Feliz) approaching Tina Minoru (Lyrica Okano), saying that he “wanted to get everyone back together” and that he “knows that it can’t be the way that it was” and admitting that he misses everyone.

To our ears, this raises a bit of a question about what necessarily happened to their friendship. In the comics, the kids aren’t necessarily the best of friends, but they all know each other and get along due mostly to the fact that their parents all do charitable works together. They are friends due mostly to proximity more than anything, but here it sounds like maybe there was a bit of a falling out. It’s likely that the series will exploit the common trope of high school cliques dividing friends up, but it’s also entirely possible that our heroes had a falling out years ago that they’ll now need to work through. 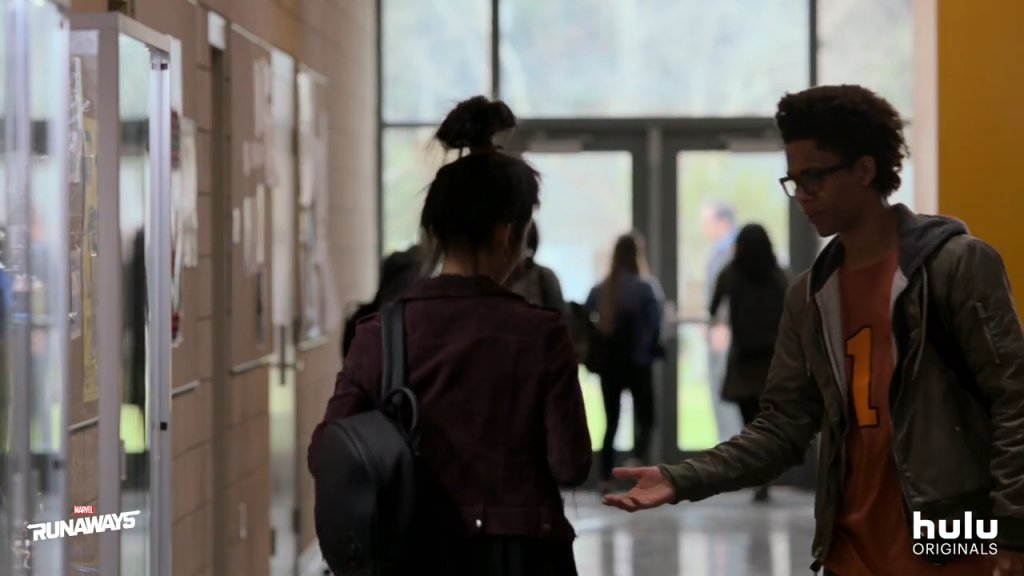 The trailer, for us, gets interesting when the kids all show up at Alex Wilder’s house but then become confused when they see all of their parents are also apparently there. We say this is confusing because, in the comics, the kids all show up at the Wilders’ home with their parents, who then go on to have their private adult meeting while the kids all entertain themselves. However, here, it’s unclear what exactly the kids are doing at the Wilders nor where they previously believed their parents to be. It seems that, as closely as the Hulu series is sticking to the source material, they’ve also changed a few things up.

RELATED: NYCC 2017: We’ve Got Our First Look at the Teaser for THE RUNAWAYS

After this, we see the kids discovering for themselves that their parents are, indeed, murdering monsters with various super powers, skills and heretofore unknown criminal influence. The kids go on the run and discover that they also have some of these powers. 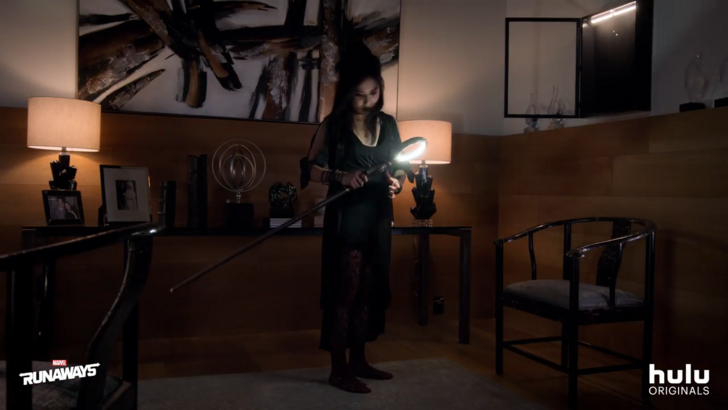 Or, access to incredible tech, like the fistigons worn by Victor Stein (James Marsters) and x-ray specs worn by Chase Stein. 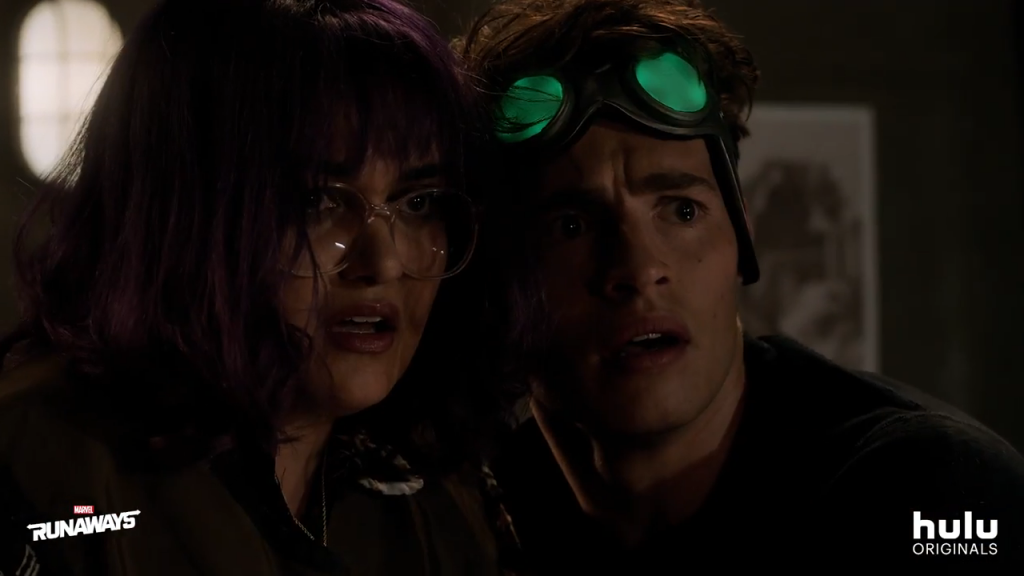 Or, you know, genetically-manufactured dinosaurs from the future with a pre-established telepathic link to one of them. 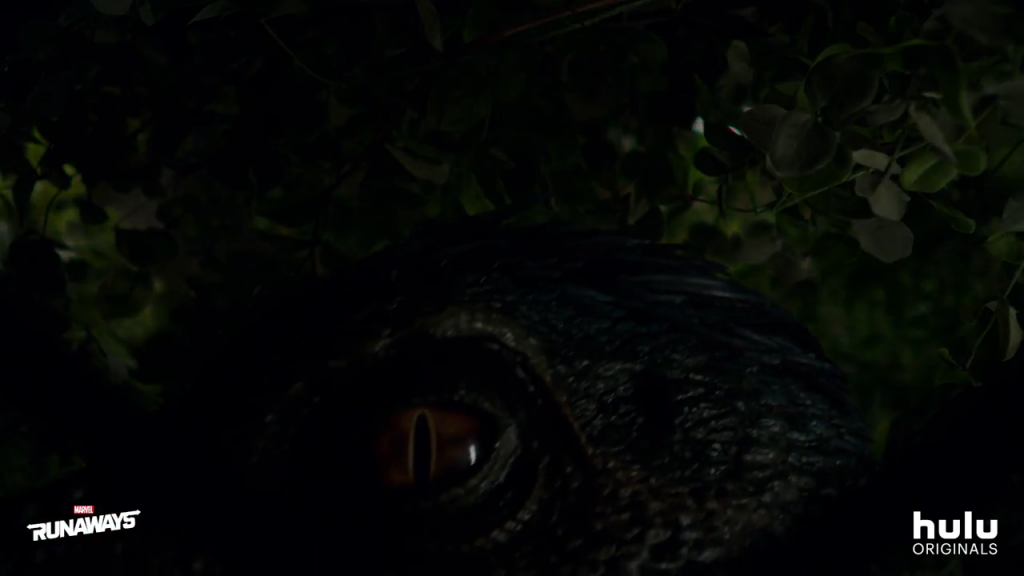 At least, they discover the hidden room where the dinosaur — which is eventually named Old Lace — has been hiding in dormancy for a number of years.

There are plenty of fun, cool moments to talk about in this trailer that also have us scratching our head. For instance, we see Molly Hernandez in the trailer crushing a metallic seat with one hand before we then also see her eyes light up. In the comics, Molly is a mutant, however, Marvel does not own the rights to mutants — that belongs to Fox. Not to mention, the MCU has no real interest or investment in using mutants since they then open up a whole new can of worms if they do — mainly, describing what a mutant is to the general audience. Our guess is that she’s an Inhuman, but we’re still left with the question of why do her eyes light up? 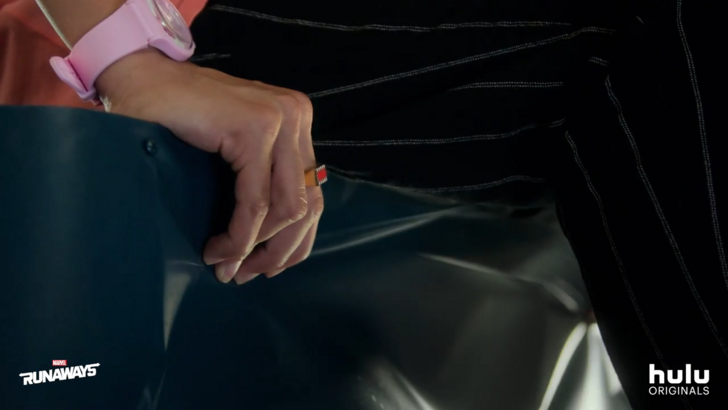 Also, does that ring have anything to do with it or is it just a cool ring?

One of the biggest reveals is how Karolina Dean looks when she’s in her full on technicolor rainbow form. That has, no doubt, been one of the biggest effects of the show. The Dean family are an alien race known as the Majesdanians. They come from a distant world that is mainly known for their munitions support of the evil Skrull empire. In the comics, wanting to keep their presence secret, Karolina’s parents give her a special bracelet that subdues her technicolor alien powers, which is why she never knew. However, once that bracelet is off, she goes full rainbow and can fly and shoot blasts from her hands. 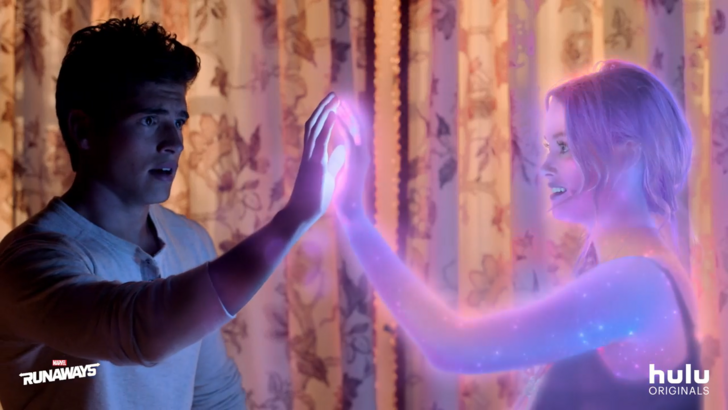 Another big reveal is seeing the Staff of One light up in Nico Minoru’s hands. In the comics, the Staff of One can only be operated with a blood drop, but once activated is one of the more powerful relics in the Marvel universe. It’s power — it can do virtually any spell you ever ask it to, though it can only do that one thing once for you. “Build a wall” — a magic wall will appear in front of you, but now, unless you can find a different way to get a wall, you won’t get one. We don’t really see any spells from it except once when Nico makes it snow, but the way the staff lights up is pretty awesome. 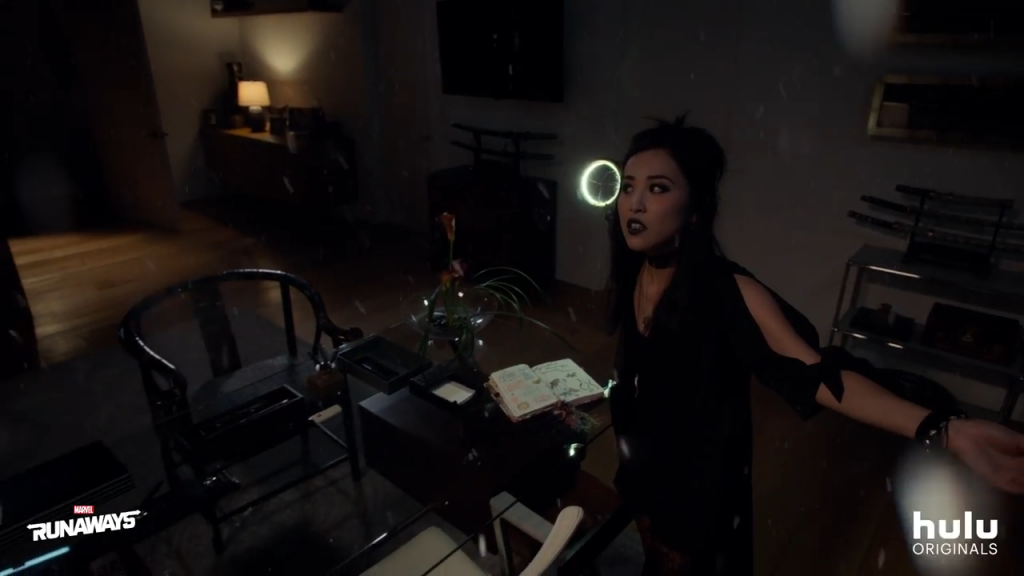 We also get the reveal that The Runaways’ parents are hailed as philanthropic people, right down to them writing a check from their Pride Foundation for underprivileged schools. 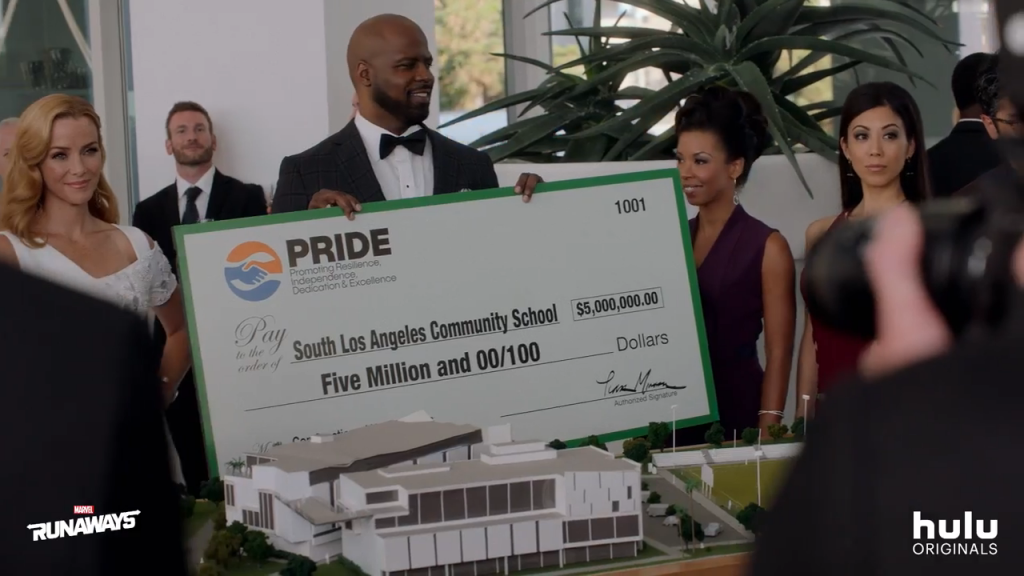 And, also, don’t worry — while we are uncertain if it’s Old Lace behind that closed door, we end up getting to see plenty of her in the trailer. 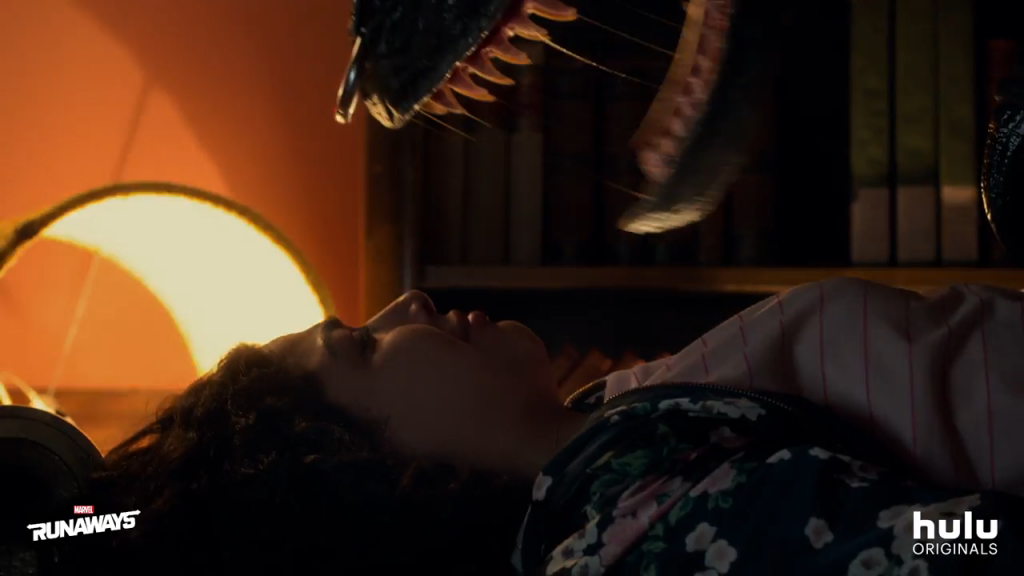