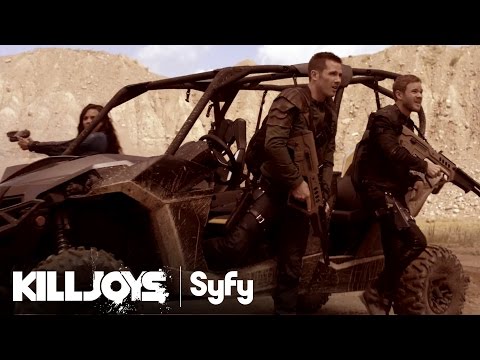 Every Friday this Summer, Syfy is the place to be! The channel has made Friday nights a must-see for action, space and aliens! Starting off the evening at 8pm is Defiance, which is now in its third season. Rounding out the evening is Dark Matter at 10pm. This Summer is Dark Matter’s freshman season and it premiered last week.

So what’s in the middle at 9pm? That would be Killjoys which premieres tomorrow (June 19) at 9pm. Killjoys follows a fun-loving, hard living trio of interplanetary bounty hunters sworn to remain impartial as they chase deadly warrants throughout the Quad, a distant system on the brink of a bloody, multi-planetary class war.

The show stars Aaron Ashmore (Warehouse 13, Lost Girl, Smallville) as John, Hannah John-Kamen as Dutch and Luke Macfarlane (Brothers and Sisters) as D’avin. The three are “Reclamation Agents” (bounty hunters) who serve warrants to pay their rent and they live by the code “The Warrant Is All”.

The show does have a space travel aspect but there are no aliens. An interesting angle of the show is the importance bloodlines and class. There is richness to that idea that can really give Killjoys a lot to work with (it’s one of my favorite science fiction tropes)

They live in the Quad which consists of a dwarf planet and its three moons. The planet is Qresh and it is home to the most desirable caste, the lucky ones, the elite, the rich and the powerful ones. One of the moons is Westerly – also known as the badlands which seems, as the name implies, very inhospitable. It’s industrial and so it’s where most of the worker class is found. Leith is where those who are not lucky enough to live on Qresh go. Think upper-middle class. Arkyn is the last moon. Not much is known about this mysterious place.

There is so much to work with in Killjoys just based on the premise alone.  The world-building that has been done so far is very impressive. It reminds me a bit of Rockne S. O’Bannon’s impeccable world-building – think Farscape and Defiance. The art-direction is beautiful. I can’t wait to get to know these characters and the system they inhabit.

Below are two more trailers plus, you can watch the first four minutes of Killjoys in the third video below.