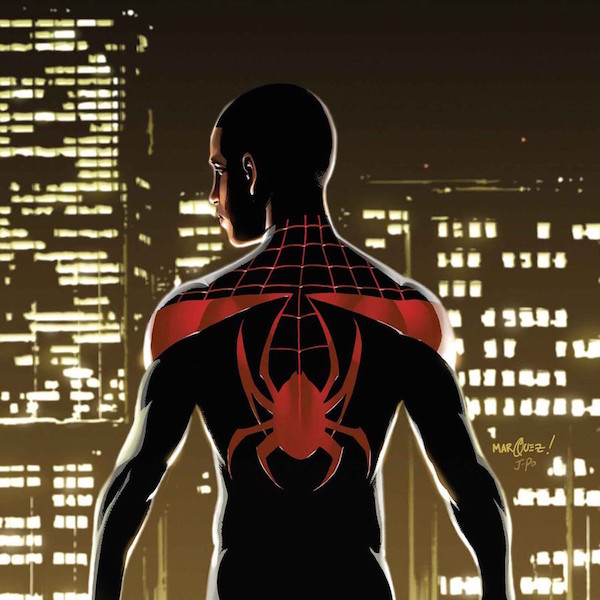 Sony Pictures has announced that the upcoming animated Spider-Man movie, due in theaters at Christmas 2018, will feature not the traditional Spider-Man, Peter Parker, but a newer alternate version, Miles Morales.

Miles Morales, a black Latino teenager, was introduced as Spider-Man in 2011 after Peter Parker was killed off in the comic book series Ultimate Spider-Man. This was part of the Ultimates line of comics, an offshoot of the regular Marvel Universe with its own continuity. When the Ultimates line was closed down in 2015, Morales was moved to the regular Marvel Universe, where he currently shares the Spider-Man name with Parker. Morales has also appeared on the Disney XD animated show Ultimate Spider-Man, voiced by Donald Glover.

Like Parker, Morales gained his powers after being bitten by a genetically engineered spider. He has a similar suite of powers, including super-strength and agility, the ability to crawl up walls, a “spider sense” that warns him of danger, and of course the famous web-shooters. Unlike Parker, Morales also has the ability to camouflage himself, as well as a “venom sting” touch that delivers a stunning jolt to his enemies.

Morales was one of the first attempts Marvel made to expand its traditional stable of super-heroes with nonwhite, non-male versions in hopes of drawing in readers from different cultures, as well as younger readers who prefer media with diverse casts. Similarly, Marvel has introduced a female Thor, a Korean version of the Hulk, a black female Iron Man, a Muslim Ms. Marvel, and other similarly diverse characters.  While there has been some backlash to these new characters from fans who prefer the traditional versions, the new characters have also drawn fans of their own. Even Marvel’s competitor, DC Comics, has gotten in on the act by recently adding a Chinese Superman. Planning an entire movie around Miles Morales is a clear signal that Marvel and Sony believe there is an audience there for him.

The movie, which currently has no title or cast details available, will be written by The Lego Movie co-creators Phil Lord and Christopher Miller, and directed by Bob Persichetti and Peter Ramsey. It will not be part of the Marvel Cinematic Universe, where Tom Holland has played Peter Parker in Captain America: Civil War and the upcoming Spider-Man: Homecoming. This will be the fourth iteration of Spider-Man on the big screen, after Tobey Maguire, Andrew Garfield, and Holland have all played the character. The animated movie was originally announced for summer 2018, but was pushed back, likely so Lord and Miller could finish their work on a planned Star Wars movie featuring a young Han Solo.