New Pictures of Jon Bernthal as Frank Castle in THE PUNISHER!

Now, listen, we know this isn’t too much to go on, but right now, we’ll take whatever we can get.

A Twitter user from Turkey, @Kulturpat, unearthed these pictures of Jon Bernthal on the set of Marvel’s next Netflix series, The Punisher. The Google translation of the original language, which is Turkish, says “New Photos from set. Frank got rid of the beard.”

Now, like we said, this is not much to go on. All we see is Jon Bernthal as Frank Castle wearing a black jacket and holding some flowers as he walks down the sidewalk of a seemingly nice neighborhood. There’s no guns here, no bombs, no bad guys being led by a very angry and vengeful Jigsaw — but it is Jon Bernthal on set as Punisher.

There’s no release date just yet for The Punisher. Right now, all of the attention is going to Iron Fist, hitting our screens in March, which is just a couple months away now. Beyond that, Netflix is starting to release a lot of publicity for The Defenders, which will see all of our street-level heroes joining forces. It’s safe to assume that once we’ve past Iron Fist and are full-steam on for The Defenders, we’ll start to hear some news about when we can expect to see Bernthal take up the white skull and rifles again.

Until then, at least we have these two pictures. Like we said, it’s not much, but at least it’s something. 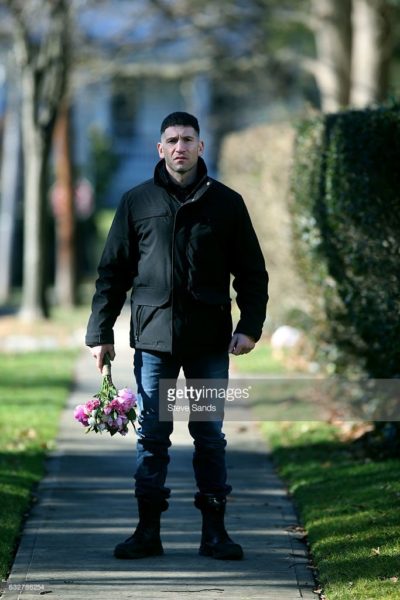 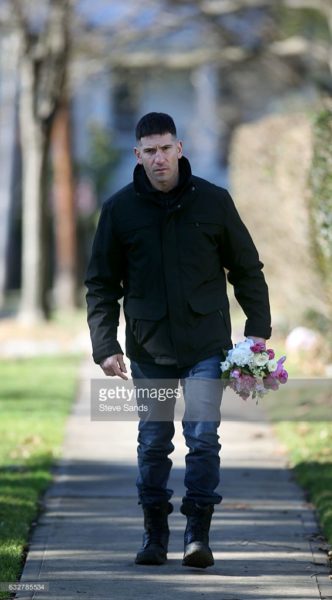 Thanks to Comicbook.com for finding these pictures!