New Picture Gives First Looks at Wonder Woman and the Amazons of Themyscira!

Now THIS is a movie!

We’ve got our first look at Diana of Themyscira and her fellow Amazonian Warriors for the upcoming film Wonder Woman, Warner Bros. next big outing for the DC Extended Universe. 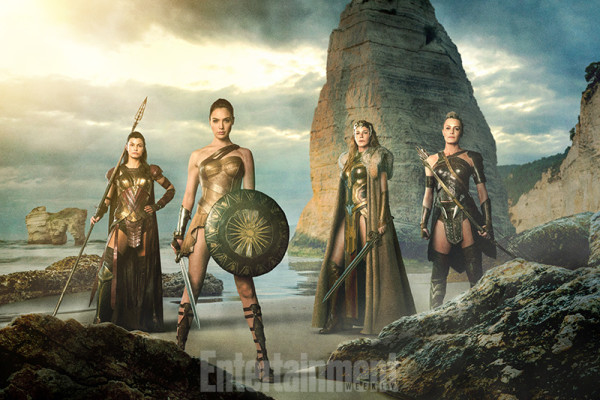 The picture comes to the world via Entertainment Weekly, which also named their roles. In the picture we see Wonder Woman (Gal Gadot) along with her mother, Queen Hippolyta (Connie Nielsen), and her aunts General Antiope (Robin Wright) and Lieutenant Menalippe (Lisa Loven Kongsli).

According to the article, Antiope is the Amazon responsible for Diana’s training, wanting to prepare her, which runs counter to Wonder Woman’s mother, Hippolyta, who “longs to shelter her beloved daughter from the outside world.”

Director Patty Jenkins describes their relationship saying, “She is the only child they raised together. And their love for her manifests in a different way for each of them.”

Jenkins and her team, including producer Charles Roven, wanted to bring a uniqueness to how the Amazons looked and lived. To define all of their production design questions, Jenkins and her team asked themselves one central question — “How would I want to live that’s badass?”

The EW article describes the look that Jenkins and her costume designer, Lindy Hemming, came up with as a look that “showed off the women’s ripped shoulders and toned legs” but all in outfits that “looked practical” and “featured the tropes of the comic book.” Those tropes, in particular, are “the braces on their wrists” and the high heels.

“To me, they shouldn’t be dressed in armor like men. It should be different. It should be authentic and real — and appealing to women.”

As for those heels though, impractical as they may be, Jenkins has an answer for that as well: “It’s total wish fulfillment. I, as a woman, want Wonder Woman to be hot as hell, fight badass, and look great at the same time — the same way men want Superman to have huge pecs and an impractically big body. That makes them feel like the hero they want to be. And my hero, in my head, has really long legs.”

Though, she does add later that when the women all fight, they wear flats.

But what about the mystical magical hidden paradise that is the island of Themyscira?

The article says that they used “exotic islands off the coasts of Italy and southern China” to give it that fantasy element and enhance the “otherworldliness of scenes filmed on Italy’s Amalfi coast.”

Producer Charles Roven added, “Themyscira is influenced by the Greek but it’s clearly more then that. It’s a place that has the ‘you’ve never been to’ kind of feel. But once you’re there you’re not so sure you really want to leave so fast.”

We can definitely say mission accomplished.

Friday! I'm delighted to be saying comedy words at #GameNightVarietyShow with my co-host @LaserMWebber and awesome guests @audreykearns, @KimEvey, and @danaswanswan! There will be music! BYOB! A cat might wander in to the theater! $5 tickets in advance: https://www.eventbrite.com/e/game-night-a-variety-show-comedy-comics-music-games-tickets-94538391875