Fox Studios, in many ways, is a very major factor in the current renaissance of superhero films, having completely changed the game with their film X-Men, in the year 2002. X-2 a couple years later was just as good, some would even argue better, than the first. Sure Sony had a hand in it with their first two Spider-Man films and sure Fox had some missteps with films like X-Men Origins: Wolverine and X3: The Last Stand, which we hesitate to even name here for fear of being lynched by still-angry mobs. However, the path had already been set — superhero films had grown up.

However, despite these contributions to the now burgeoning superhero landscape, there’s been on property that Fox has tripped over every time they’ve tried it — The Fantastic Four. They started with 2005’s Fantastic Four, tried again with their sequel, 2007’s Rise of the Silver Surfer and then, tried once more in 2015 with their Josh Trank helmed super-bomb. It’s not a good thing when the 1994 just-made-to-retain-the-rights Fantastic Four film is arguably the best film of the franchise and it was never meant to be seen; that’s written record.

But, the way it works, is if the studio wants to retain those rights, they must have a film going into production within a certain time frame and it seems that Fox is aiming to keep the franchise and try for a third time. According to Bleeding Cool, sources close to the studio have told them that writer Seth Grahame-Smith is currently working on a proposed new draft of the Fantastic Four that would not necessarily feature the Fantastic Four. Instead, what we would get in this film is Franklin and Valeria Richards, the two children to Reed Richards and Sue Storm-Richards, while also still featuring The Thing and the Human Torch.

The report out of Bleeding Cool goes on to say that the entire film will be a kid-centric vibe “far more reminiscent of The Incredibles.” 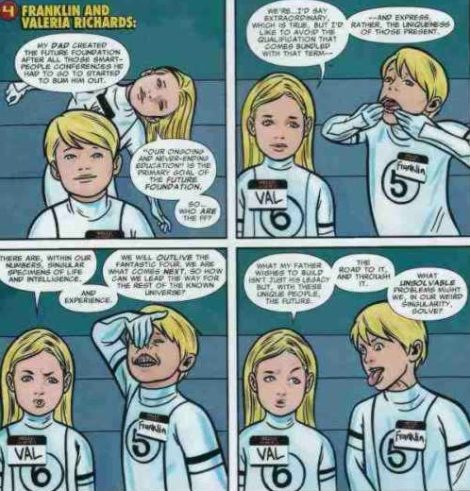 Now, we should caution you here — Fox still has time to get a Fantastic Four film into production, so anything they are doing at this time is very much in a development phase. It’s likely that Grahame-Smith pitched this idea to the studio and they are interested in it, but not yet sold, so this is a proof-of-concept. Of course, Grahame-Smith could also be a work-for-hire brought in to execute this idea, but again as a proof-of-concept. It’s entirely possible that they have a thousand other Fantastic Four scripts in some stage of development, hoping that one of them will work.

Not to mention, this is all unconfirmed by the studio and is therefore still very much a rumor.

That being said, a kid-friendly family adventure featuring the children of the Fantastic Four isn’t a terrible direction to go. In fact, it’s more akin to the original comic than anything they’ve made thus far and could prove to be the best film of the franchise for that reason.

If Fox will Fox it up and it will go down as failure three.