This poster is perfect.

In anticipation of the world premiere to their trailer for Doctor Strange, Marvel has released this poster for their next movie after Captain America: Civil War. It hits theaters on November 4th. 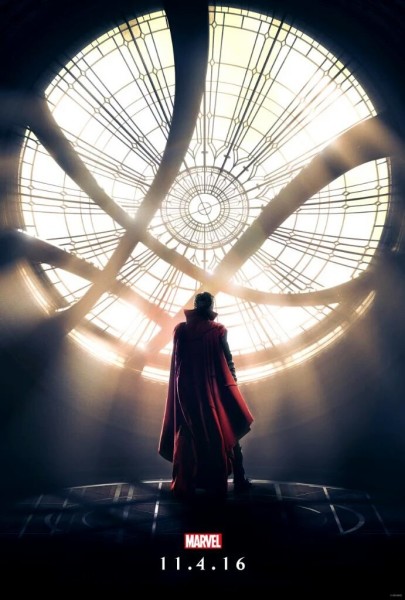 The poster features the titular hero, Dr. Stephen Strange, played by Benedict Cumberbatch, with is back to us. He’s facing what appears to be the window of his residence, called the Sanctum Sanctorum. Strange is wearing his Cloak of Levitation — the giant red cape that you see here. It allows him to, well, levitate, but he can also give it limited instructions which gives it the appearance that it has a mind of it’s own.

The window itself goes by a few names. The more popular name is the Window of the Worlds, the less common name is the Anomaly Rue. The symbol that covers the window, that sort of double cross pattern, is known as The Seal of the Vishanti — it creates a divine protective spell that keeps the entire Sanctum safe from magical attack.

But, let’s look just a little deeper at the tone of this poster. The Window looms large over Strange, who appears very small and isolated in it’s presence, illuminated only by the light coming from that window. It’s just him and this Window of the Worlds, which is very literally just that — a window that allows him to look into every other dimension in the multi-verse to see what threats are approaching our reality.

RELATED: The Marvel Multiverse of Doctor Strange — What is it?

RELATED: Top Seven Reads to Get Into Doctor Strange Before the Film’s Release

It actually says a lot if you know this character. A common theme with super heroes is how separate they are from the rest of us. It’s not necessarily superiority or that they are better than us, just that the responsibility and power that they wield distances them from typical human concerns.

Doctor Strange definitely falls into this category, maybe even more so than any other hero in the Marvel universe. Where Captain America and Iron Man fight evil scientific organizations and alien invasions, definitely world ending threats in their own rights, Doctor Strange stands more or less alone in his capacity to handle the extra-dimensional threats that none of the other heroes are even aware of.

He is the Sorcerer Supreme, the most adept expert and practitioner of magic and sorcery on our entire plane of existence. And, as such, it is his sole responsibility to keep this entire reality safe from the forces that threaten it. Sure he has his friend and assistant Wong (Benedict Wong) and, eventually, has the help of his girlfriend Clea, and in this film he appears to have Baron Mordo (Chiwetel Ejiofor)  assisting him — but at the end of the day, it’s all on him.

So, in this poster, if it looks as if he’s got the entire weight of the world on his shoulders, looks a bit sad or lonely, it’s because he absolutely is.