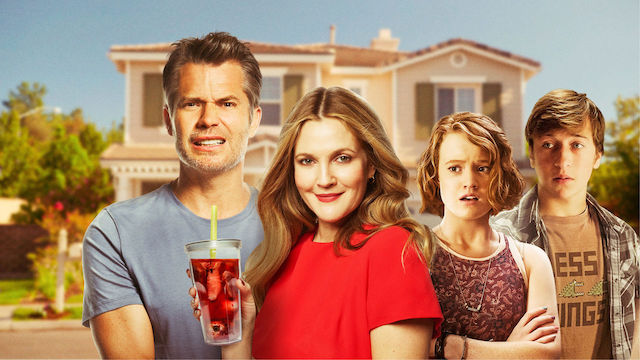 I have recently stumbled upon the teasers for this wonderfully charming Netflix comedy, Santa Clarita Diet, and I cannot wait for the premiere this Friday, February 3rd!

It’s a family comedy with a twist, starring Drew Barrymore and Timothy Olyphant and here is the synopsis:

Joel and Sheila Hammond are realtors leading vaguely discontented lives in the L.A. suburb of Santa Clarita, until Sheila goes through a dramatic change sending both their lives down a road of death and destruction… but in a good way.

The dramatic change is that…she’s a zombie!!! Don’t worry that’s not a spoiler, although, for a while I wasn’t sure what it was about. The teasers were great about not disclosing too much, but all-the-while interesting enough for Santa Clarita Diet to keep catching my eye. A tongue-in-cheek “diet” commercial.

I’m very interested in the commentary on family and relationships, in a suburban city. Married life. Life as a woman and a parent. How something drastic can be devastating from one point of view, but from another, be the thing that defines a great change that was needed. I also believe that transformation is necessary to continue to grow as a human being, otherwise your life will become stale and mundane. And the fact that this specific transformation, in this television show, is that Drew Barrymore’s character turns into a zombie, is just freakin’ hilarious. It’s truly a family comedy spliced with some horror and a huge dose of funny!