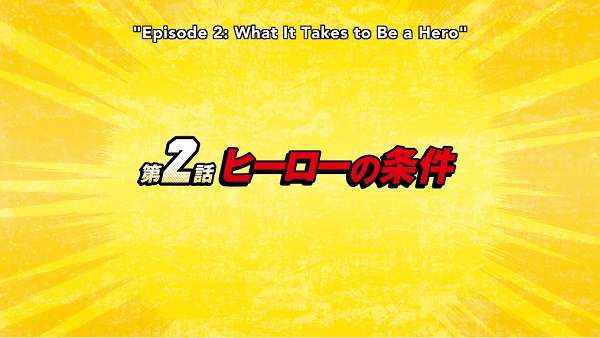 Standing on a rooftop with the world’s greatest hero, a boy asks the question that ignites his soul, “Even without a Quirk, can I become a hero?” It’s a question that doesn’t have an easy answer, and in this world of quirkily gifted people, even professional heroes have their limits. As he considers Izuku Midoriya’s question, All Might reaches his.

With a cloud of steam and a mouthful of blood, the hulking hero deflates to a lanky, emaciated form. His hair drops, his posture stoops, and his grin withers into a grimace. While Izuku reels at the sight of his idol’s true form– instinctively pegging All Might as a fraud– the exhausted hero explains his plight. Five years prior, he suffered a serious injury in a fight with a villain. Severe damage to his respiratory and digestive systems, and the operations to treat them, diminished his strength. Though his Quirk can return him to full size, he can only stand to use it for a few hours a day. 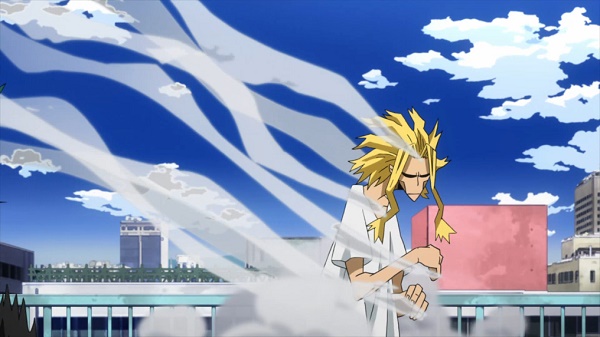 Professional heroes put their lives on the line every day, and that is why All Might can’t affirm Izuku’s dream. If the greatest hero can have his guts all messed up by a villain, then what chance does a Quirkless kid have? Emotionally (and in All Might’s case, literally) deflated, All Might and Izuku take the stairs back down to street level like a couple of Quirkless chumps. In the distance, a villain wreaks havoc.

As the two part ways, a realization finally hits All Might: his pockets are empty. The ooze villain he’d bottled up must have slipped free while Izuku was clinging to his legs, and that commotion in the distance has to be related. Wouldn’t you know? It landed right in the path of Bakugo and his lackeys. Aimless violence always smoldering, Bakugo thoughtlessly punts the bottle, popping it open and setting the slime ball free. As before, the gloopy jerk sets to trying to inhabit a teen boy’s body, though this time the teen has a cool Quirk to exploit. Running Quirkless, All Might plods and wheezes his way toward the action. 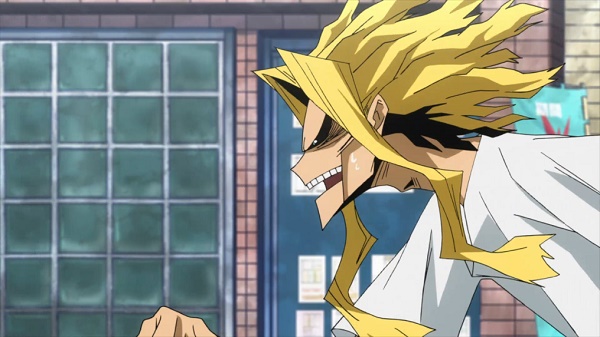 The greatest hero in least great shape arrives on the scene to see Bakugo being swallowed up by the muckman while numerous heroes look on helplessly. None of their Quirks are suited to dealing with this ooze, and they don’t want to risk endangering the captive Bakugo. Unfamiliar to those around him, the skinny All Might grips a light pole and laments his pathetic limitations. How could he crush a kid’s heroic ambition while standing here, not putting his life on the line? 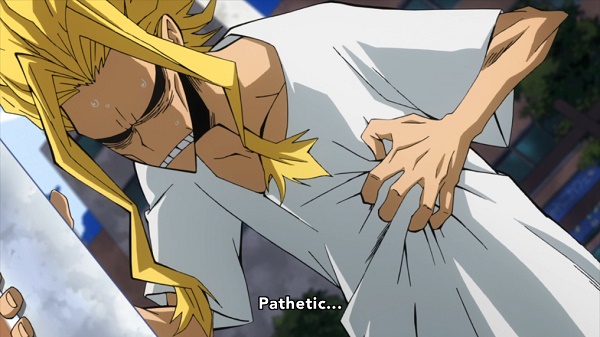 Suffering his own self doubt, Izuku mindlessly walks through the city, finally taking to heart all the discouragement he’s received in his pursuit of heroism. He’s roused from his depressive stupor by the realization that he’s unconsciously wandered directly to the scene of the conflict. As he tries to piece together what’s going on based on chatter from the onlooking crowd, he catches a glimpse of the goop guy. His self pity is swept away by the crushing pressure of guilt. He let that monster free, and now its trying to slip up some other kid’s nose. All Might and Izuku both let that villain slip away, and they’re both standing here helplessly watching, and the guilt crushes down on them until their resolve hardens to diamond. 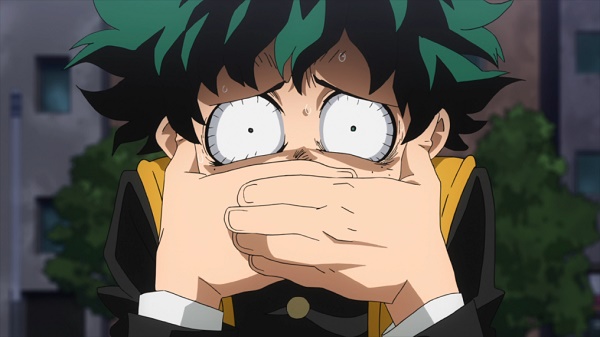 Izuku finally spots the kid being swallowed up by the muck, and that’s all it takes. Seeing the desperate look in Bakugo’s eyes, reflex takes over and Izuku rushes in to the fray. The slime man lashes out, but years of copious notes on super-combat rush back to Izuku guiding him as he dodges, then flings his backpack in to the crud creep’s eyes. It isn’t much of an attack, but it’s enough to loosen the villain’s grasp on Bakugo. No one can figure why a kid would do this, least of all Bakugo, but a tearful Izuku explains, “You looked like you were asking for help.” 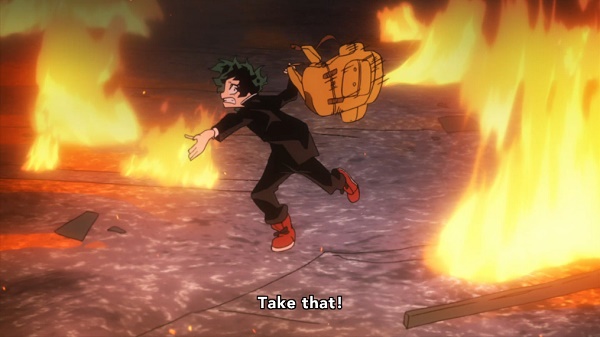 Bakugo isn’t touched by this moment, and neither is the ooze person wrapped around him. Another tendril of slime whips toward Izuku, too quick to dodge. Luckily, he doesn’t have to dodge. Why? Because All Might is here. Seeing Izuku’s brave attempt made him act on the truth of his harsh words to the boy: pros are always risking their lives. At full stature, mouth full of blood, All Might grasps the youths by their collars and winds up a punch. Bellowing, “Detroit Smash!” he unleashes a blow that briefly fills the street with a twister, scattering the viscous villain and shifting the air pressure so drastically that it starts raining. The crowd goes crazy. The boys go home. 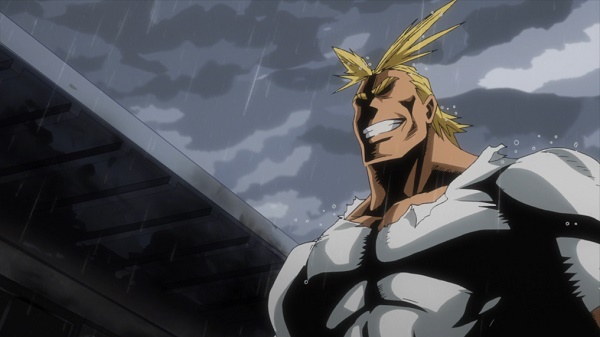 Crossing paths in an alley, Bakugo makes it clear to Izuku in the jerkiest of ways that he didn’t need help, and never ever will. Taking it in stride, Izuku turns to walk toward a new Quirkless future. Suddenly, All Might. Barely a sentence escapes his lips before the fountain of blood follow, and skinny All Might returns. Though physically diminished, he still swings hard emotionally. Apologizing for his harshness on the rooftop, All Might shares with Izuku the one thing that all top heroes share in common; their bodies moved before they had a chance to think.

All Might has recognized the potential in this boy, and finally says the words Izuku’s been waiting to hear since kindergarten. 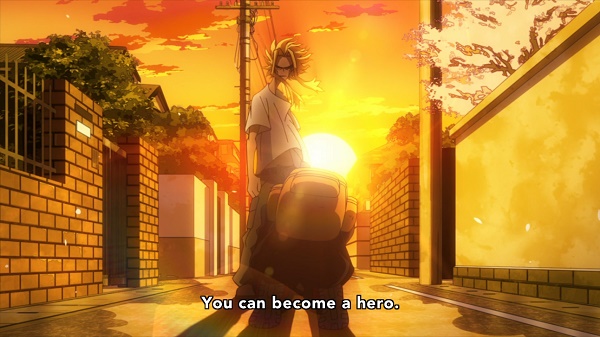