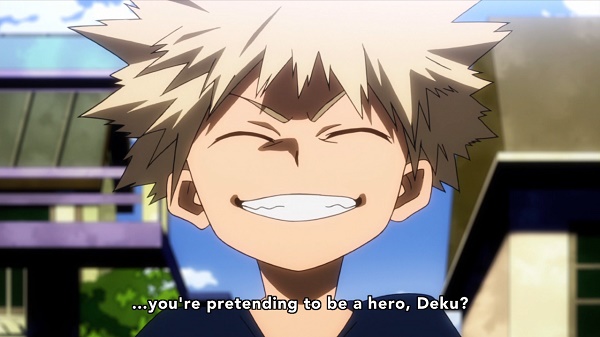 My Hero Academia (available streaming on Funimation’s site!), like so many anime series, starts with a teenage boy. Well, technically it starts with that boy getting beat up as a child. In a world where, for multiple generations, eight out of ten people are born with a “quirk”– some sort of ability or physical mutation– Izuku “Deku” Midoriya is one of the few born quirkless. From kindergarten to middle school, being normal has alienated “Deku” from his gifted peers. 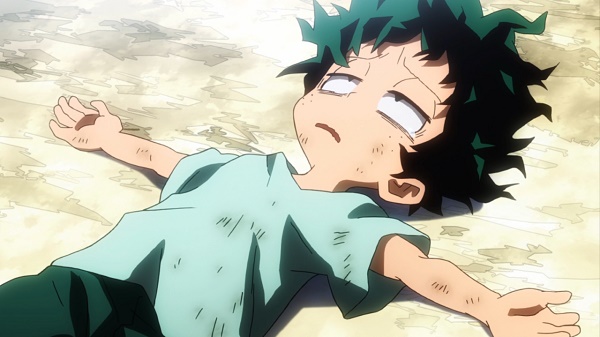 As Izuku rushes to school, his morning commute is interrupted by a clash between heroes and an enormous villain. A giant beastly man has put his super size and strength to work purse snatching, and multiple heroes have flocked to the scene to stop his unambitious rampage. Finding a detour isn’t an option for Izuku, as this is a prime chance to watch heroes in action and add data to the thirteenth volume of his notes on super powered people.

Middle school is coming to a close and all the kids with explosive palms, stretchy eyeballs and super strength are heading to high school hoping to pursue the lofty career of professional heroism. One student above all, Katsuki Bakugo (the “exploding palms” one), is certain of his destiny. He will be the only student form this school to attend the prestigious U.A. Hero Academy, and from there he will surpass the greatest hero: All Might. 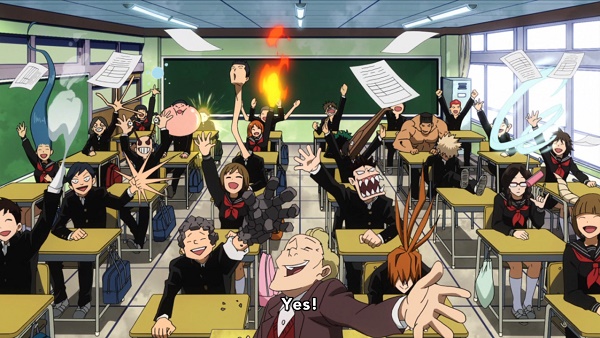 Bakugo isn’t the only student in this class spurred on by the legend of greatest hero, All Might. Quirkless or not, Izuku has been infatuated with All Might since childhood, hoping that with diligence and copious note taking he could one day become a hero. Though he has no counter for the constant ridicule heaped on by his classmates, or the years of bullying at the explosive hands of Bakugo, none of it is enough to dampen his dream. U.A. High recently dropped the requirement for applicants to have a quirk, and Izuku believes this is his way in. 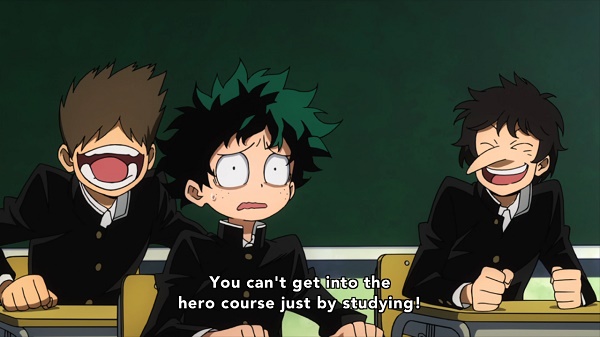 Collecting his notebook– singed and tossed in to a coy pond by Bakugo– Izuku reflects on the day he learned he has no quirk. Most children manifest a quirk around age four, and can often be distinguished from less “evolved” humans by their single jointed pinky toes. At age four, Izuku showed no quirky signs and an X-ray of his double jointed pinky toe cinched it. Quirkless. The shows trademark tears (for characters and viewers alike) start flowing as young Izuku rewatches the same viral video of All Might saving dozens of people, hoping for some way to keep his dream alive. All his mother can do is apologize. 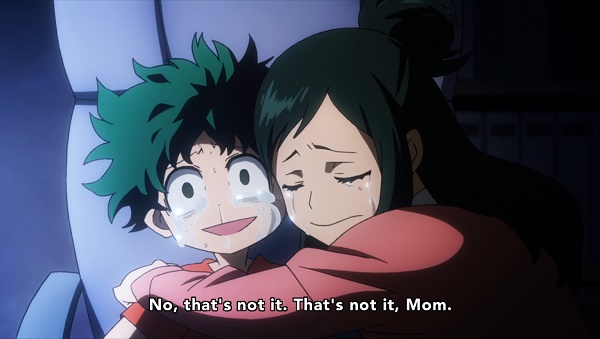 Izuku heads home, dejected, but not deterred. He marches through a tunnel, rekindling his spirit by emulating All Might’s jubilant laugh. If not for the laughter, he might have noticed the villainous animate slime guy oozing up behind him. He doesn’t. And without a quirk, there isn’t anything he can do, regardless. As the slime-man suffocates him, trying to enter and take control of his body, Izuku struggles in vain.

Just as he starts to slip from consciousness, everything is fine. Why? Because All Might is here. Bellowing, “Texas Smash!” All Might punches with enough force that the air pressure through the tunnel scatters the ooze dude. After sealing the villain up in the bottles from his groceries, All Might greets a waking Izuku Midoriya. Boy and idol face to face, the encounter plays out about as well as a fan meeting a celebrity can. Izuku is effusive over All Might’s timely intervention, and astonished that the hero autographed his notebook while he was unconscious. 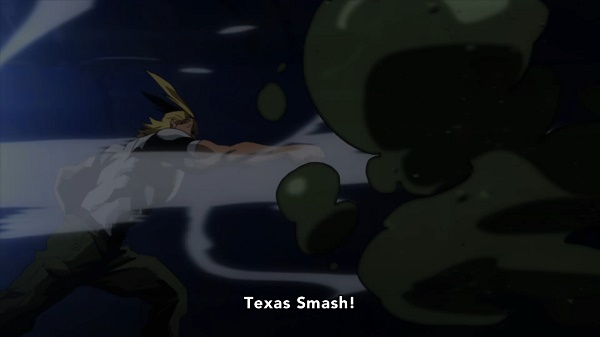 All Might gathers the captive villain and leaps in to the sky en route to the police station, he immediately notices something off; there’s a teenage fanboy clinging to his leg for dear life. He looks for a rooftop to land on, and a drop of blood trickles from his mouth. Shit, time’s running out. On the roof, All Might tries to politely part ways with this over enthusiastic boy, but just as he readies another super-leap, Izuku finally collects himself enough to ask the question that’s driven him for his entire life. 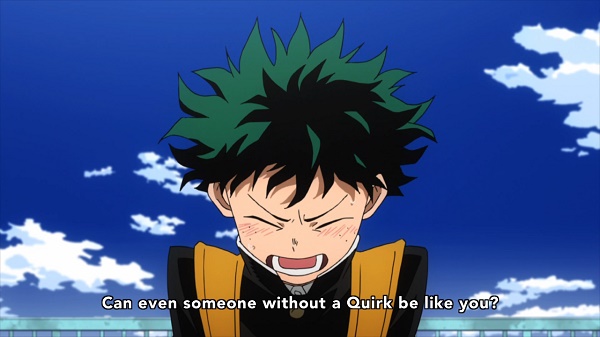