Home » Stuff We Like » My Fan Experience at WALKER STALKER CON

I just got home from Walker Stalker Con in Tulsa and I am on cloud nine! The Walking Dead is most definitely my favorite television show.  I love the comic as well and I’m not a big comic book fan. Having been to San Diego Comic Con International, I already knew what to expect, but I didn’t know just how close I could get to my favorite cast!

Walker Stalker started in 2013 by James Frazier. It’s not like other conventions because of the fan experience.  The con is set up for the fans to get close to their favorite actors, take a photo, get an autograph and to stand and talk for a minute or two. My experience was awesome! Although, perhaps it would have been better if I hadn’t frozen when I saw Ross Marquand dance.

First of all the floor is open, so you can see the panel stage, the celebrity booths, and all of the vendors and games. There are lines for everything, literally, but it’s totally worth it. 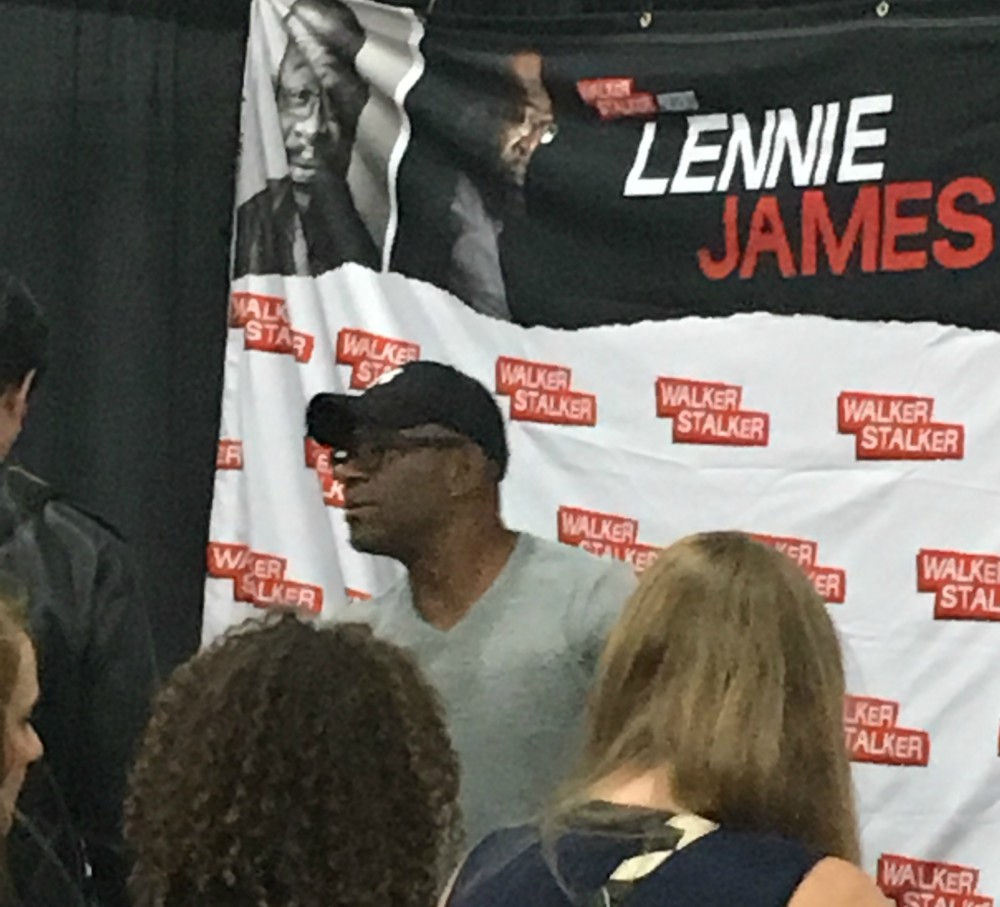 I walked in and immediately went to the celebrity booths. They have a schedule of when they are signing autographs and when they are at the photo op booth. There is also the option to take a selfie at the autograph booth. That was my choice because everything has a price.

The autograph and the selfie were the same price. The prices range between $25 to $60. The photo op booth is managed by a professional photographer, so those prices are a little higher.  You can also just meet the celebrities and say hi. That is free! 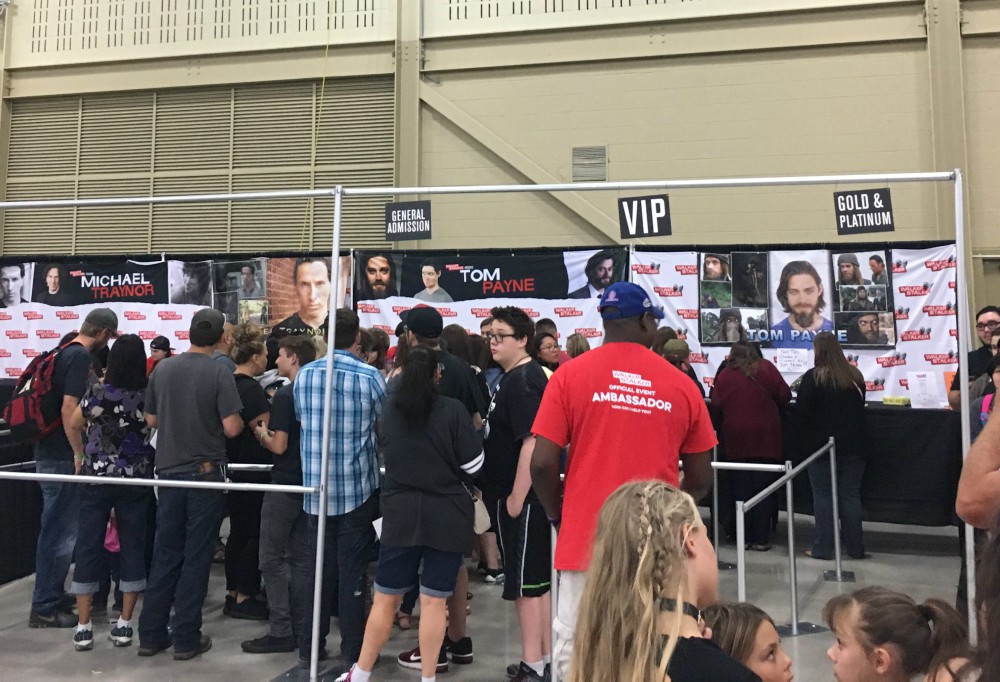 Rooker, Wilson, Cudlitz and McDermitt had the longest lines. Cudlitz does a Bisquick food drive. Fans are encouraged to bring Bisquick and other non-perishable foods to Cudlitz’s booth when they meet him. Again…it’s a long line.

The first person I visited was Ross Marquand.  He…Is…So…Awesome! He’s a hugger and he looks you right in the eye and speaks to you like you’re his long lost friend.

RELATED: SDCC 2017: FEAR THE WALKING DEAD Will Be Bolder, Bloodier, and Zombier

RELATED: SDCC 2017: THE WALKING DEAD Tributes, Season 8 Trailer and a Look Back at the First 99 Episodes

OK. I wore a “Negan’s Sluggers” shirt because it was the only TWD shirt I had. He recognized it and was sad. I apologized that I couldn’t find an Aaron shirt before the convention. He was great though! I loved talking to him. That’s when I froze up. I didn’t really ask anything that I wanted to. I did remember to thank him for making the trip to Oklahoma and shook his hand before I left. After that, I don’t remember much. LOL. I had to take time to collect myself before going to my next celebrity. 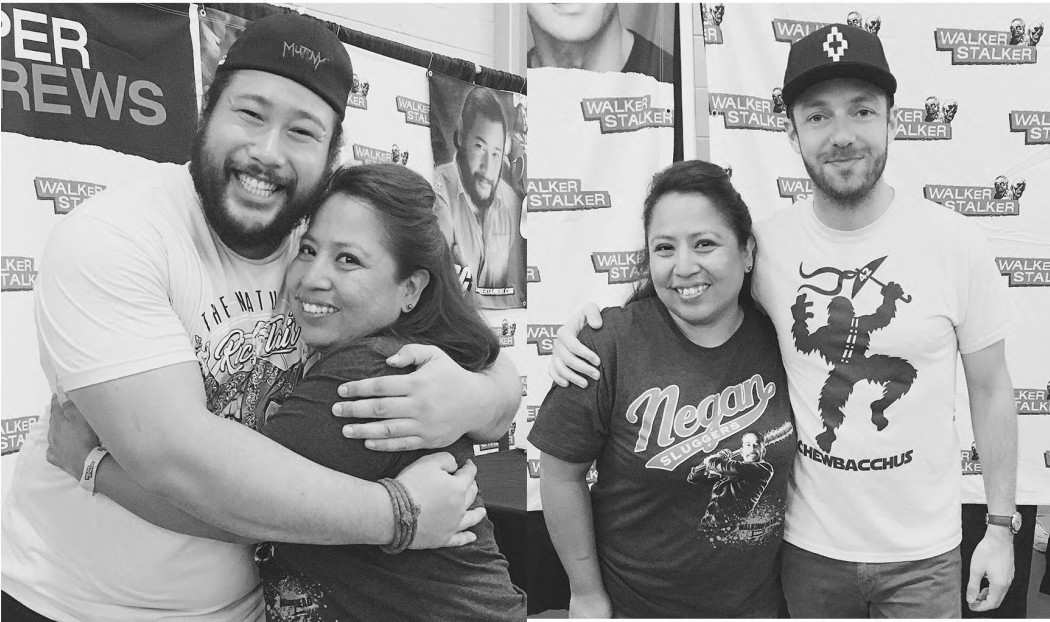 I decided to get a selfie with Cooper Andrews, who plays Jerry in TWD. The first thing I noticed was that there was peach cobbler on the table where you pay. I loved it! Peach cobbler is my favorite. (That’s in reference to a scene from last season. King Ezekiel is gathering his men to go to a meeting with the Saviors. He finds Jerry eating cobbler and tells him to leave it. Jerry looks sad. So the King says he can bring the cobbler and Jerry is very happy!)

The celebrities hug you when they first meet you. It’s so nice! I told Cooper that I heard he gives the best hugs. So I got a bigger, tighter hug! And then we took a selfie. He’s the nicest guy. He had a huge smile on his face the entire time. I just love this guy!

I chose to go to these two first because they are my favorite characters in the show. Don’t get me wrong, I love Hershel, Beth, Abraham and Eugene. Aaron and Jerry are different. They haven’t been hardened by the drama of the series…yet. And they see the good in everyone. Jerry is especially optimistic about everything. And that’s why I love their characters. Now I love them even more.

Things were wrapping up. I did get to see Michael Rooker onstage talking about his experience on TWD and Guardians of the Galaxy.  Someone asked him if he would appear in Avengers: Infinity War. He said he couldn’t answer the question.  Hmmmmm…SPOILER but didn’t Yondu die in GotG 2? 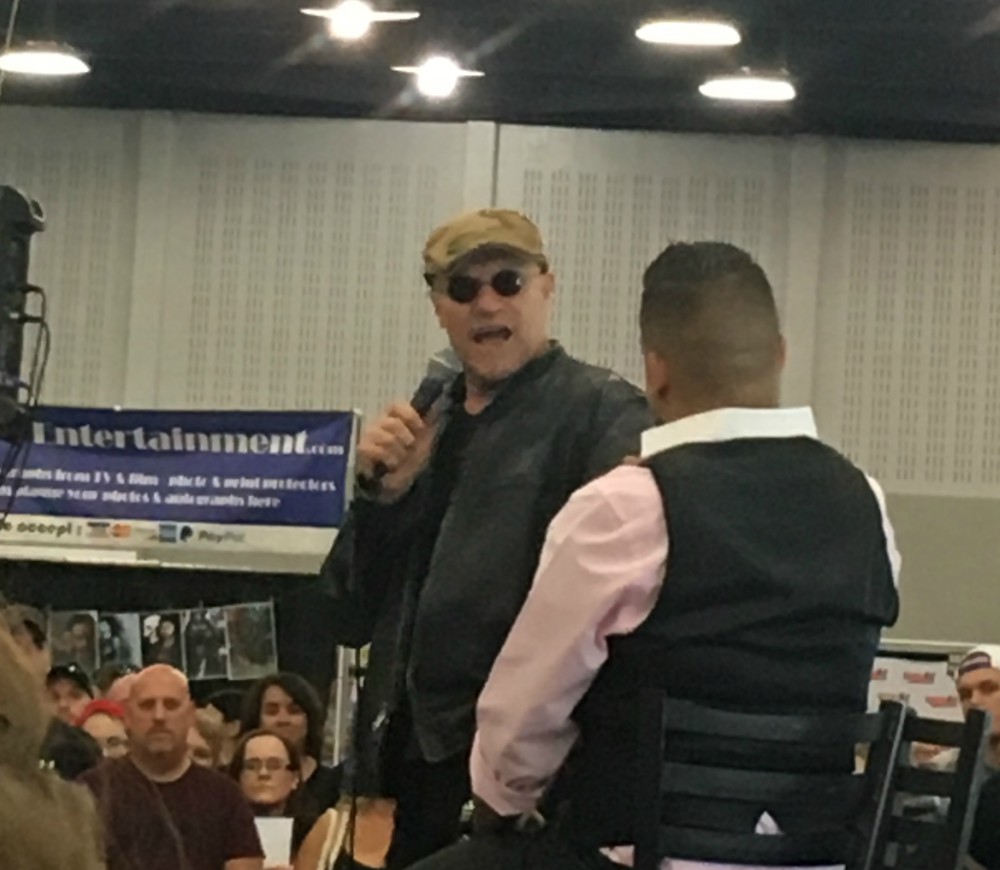 Most of the past cast members who got onstage talked about their time on TWD. The current cast members played games. Marquand, McIntosh, and Traynor played “Sicktionary”, basically Pictionary but everything pertaining to TWD. That ended with a dance off between Traynor and Marquand. Ross won!

I love Lennie James’ accent. I’ve seen him on AMC’s Talking Dead, so I knew he was British.  It’s just different when you hear it in person.

There were non-TWD guests, including Dennis O’Hare from American Horror Story.  His flight was delayed and his line was also very long. Anastasia Baranova, Keith Allan, Nat Zang and Russell Hodgkinson from Syfy’s Z Nation were also there.

A lot of people were dressed as characters from TWD or just zombies. A lot of Negan, Carol, Rick, and Carl. There were a couple of little girls dress as zombies with their dad. It was really creepy. One of the girls would literally growl at people as she walked by. 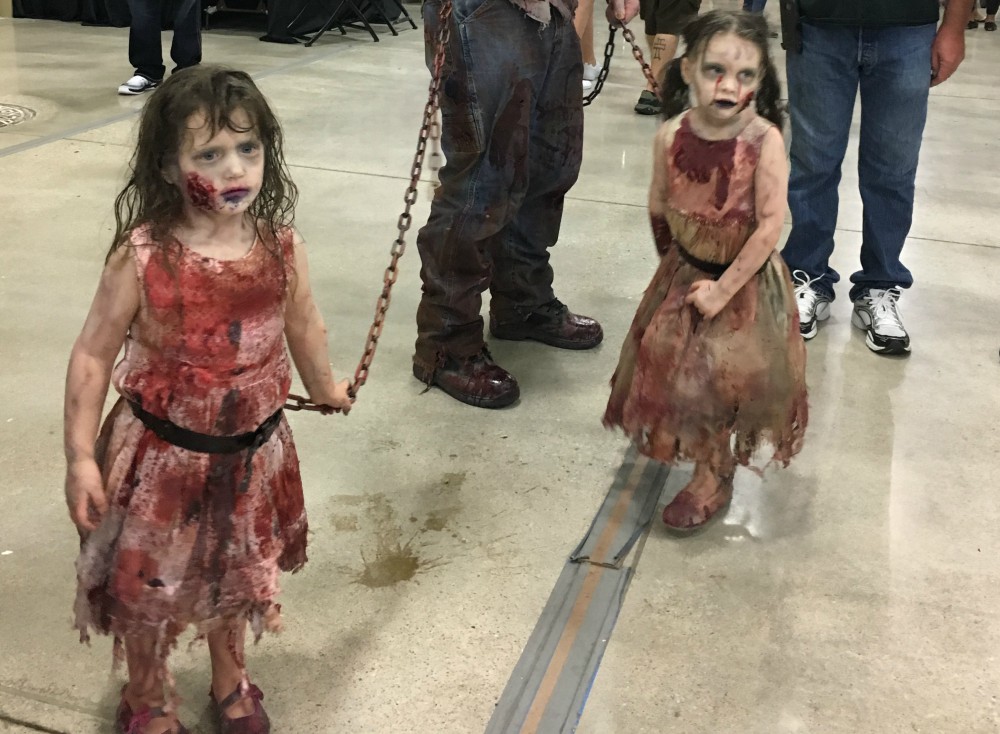 I wasn’t able to get to everyone. It was just great to be in the same room. I will say that as a fan of TWD, I do feel appreciated. The cast always says TWD would be nothing without the fans. And this is there way of saying Thank You to the fans who attend. Hands down…THE best fan experience I’ve ever had. I don’t think anything will ever top it.