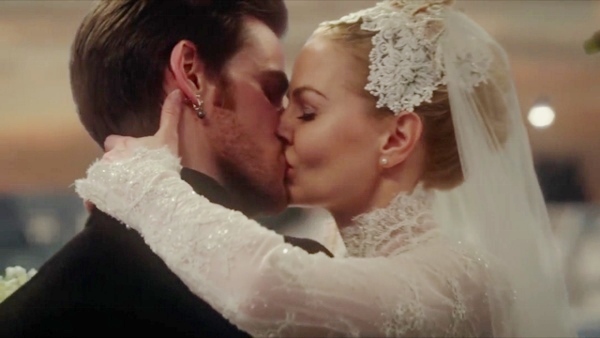 ONCE UPON A TIME, the Savior married a Pirate. It’s the big musical event! The Swan-Hook Wedding!

Read all of season six Once Upon a Time recaps here.

Last week, our heroes were told that the evil Black Fairy had been banished forever.  Rumpelstiltskin lied about his mother’s death.  How will this affect the Swan-Hook wedding?  Let’s find out…

The first flashback is of Emma as a young girl. She is looking at a flyer for a talent show. She picks up a tape recorder and starts humming.  An older girl walks in and tells young Emma that she can’t sing.   She’s just like the rest of them…all alone.

In Storybrooke, Emma’s wedding day is here.  Emma (Jennifer Morrison) is picking out a dress. Snow (Ginnifer Goodwin) tells her that she found her wedding dress. Snow asks Emma if she wants to wear it. Emma says yes.

Flashback to the Enchanted Forest

Snow and David have just gotten married. And threatened by the Evil Queen, Regina (Lana Parrilla). Rumpelstiltskin (Robert Carlyle) told the Charmings there is nothing they can do to stop Regina from hurting Emma.   David (Josh Dallas) promises to find a way to protect their daughter.   He tells Snow to rest.

She goes out side and make a wish to give them what they need to help Emma. She wants Emma to have a happy ending.  The next day she wakes up singing.  Everything that Snow has to say is in song.   David walks in singing as well.  They sing about how the love in their songs will help Emma defeat the Evil Queen. 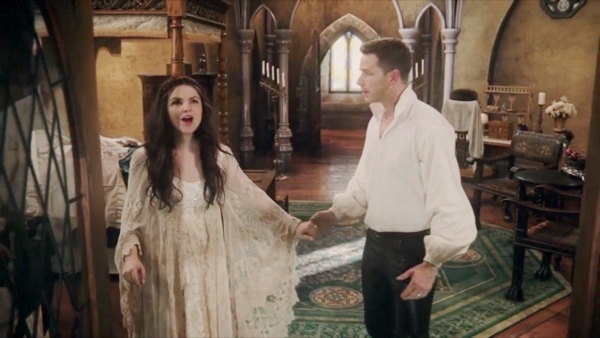 Snow White’s dress arrives and turns black.  The Black Fairy (Jaime Murray) appears. Everyone is shocked to see her. The Black Fairy says that light and dark must have their reckoning.  There is another way. Emma has to give up her heart to the Black Fairy.

Emma, Snow, Regina and Zelena (Rebecca Mader) find the Black Fairy’s curse in the clock tower.  The curse is supposed to be released at 6 pm and will separate everyone in Storybrooke.  Emma and Hook’s wedding is also set for 6 pm.  Emma is ready to go after the Black Fairy, but Snow stops her. Regina and  Zelena will try to find a way to stop the curse before the wedding.

Regina is singing to her Mirror (Giancarlo Esposito).  She hates the singing.  The Mirror shows her that the whole kingdom is singing.  The dwarfs, Granny…Regina must stop this.  She will not let The Charmings’ love defeat her. 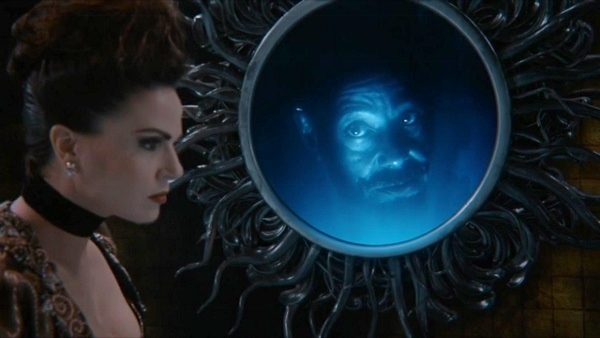 Emma tells Hook (Colin O’Donaghue) about the Black Fairy.  She promises to be on time for their wedding. Hook knows she’s saying goodbye He wants to help her. She won’t let him. She has to face the Black Fairy alone.

Snow and David  are looking for the captain of the Jolly Roger.  Hook steps forward. They offer him gold to take them to the Evil Queen.  He’s not interest in gold. There’s only one thing Hook wants. Revenge on the crocodile that took his hand.  That Crocodile is Rumpelstiltskin…the Dark One.  Snow White and David just happen to know where the Dark One is. 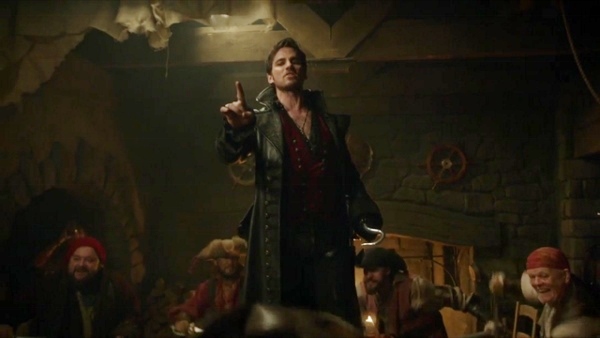 Song: Revenge is Gonna Be Mine – Captain Hook

Hook confronts Rumple/Gold for betraying Emma.  He hits Gold with a dark with dream shade that knocks him out.  The Black Fairy shows up and tells Hook that Gold isn’t the only one protecting their family.

Henry (Jared Gilmore) goes to see Emma. He says she is doing the right thing and he is confident she will win. Emma is looking through pictures to remind herself who she is fighting for.  Henry finds the tape recorder that Emma had as a child.  She tells him it’s nothing and leaves.

Regina and Zelena are having a hard time finding something to stop the dark curse.  Zelena mentions the word ‘time.’ Regina says the first curse stopped time. She needs to find a way to isolate the part of the curse that stopped time.  Then they might have a chance to break the Dark Fairy’s curse.

Evil Regina meets with Rumpelstiltskin.  She tells him about the singing spell over the land.  She wants Rumpel to tell her how to stop it.  He tells her to prove that he picked the right witch and fix the spell herself.

Zelena is watching from Oz. She has always said that Rumpel picked the wrong sister to teach.  She sings about how she will take everything away from Regina.  “Evil may be powerful, but Wicked always wins.”  Zelena puts together a spell for Regina to stop the Charmings’ spell and show Rumpel that she’s the better witch. 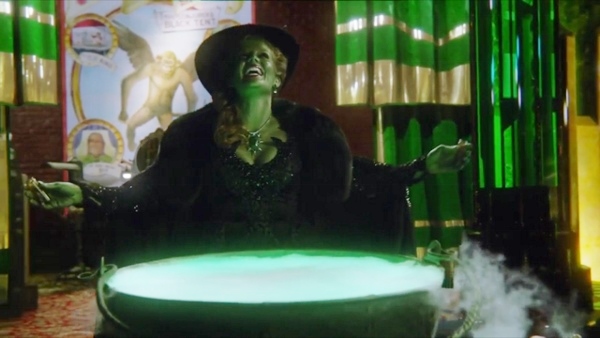 Regina is able to isolate the time stopper, but loses it to Gold.  The Night Shade didn’t work for very long.  Gold wonders how Regina’s potion to freeze the curse will work on people.

Emma confronts the Black Fairy.  She says they need to start the final battle now.  The Black Fairy says she was going to separate Emma from her family, but they did the work for her. Gold used the time stopping potion to freeze Snow, David, Regina, Zelena and Hook.  The Black Fairy tries to use Emma’s loneliness against her.  Emma leaves.

Emma goes back to the police station. She tells Henry that the Black Fairy reminded her of what it feels like to be alone.  Henry tells her that she’s not alone. She says she has always from things that were too big for.

The best way she knows how to defeat the Black Fairy is to give her what she wants.  Henry tries to stop her. She says if she fights the Black Fairy and loses, Henry will have no one. This way, he at least has their family.

The Charmings face off…sing off against the Evil Queen.  The Charmings use their ‘powerful magic of song’ to ward off Regina’s magic. Regina sings back that ‘love doesn’t stand chance.’  Regina appears to give into the Charmings. 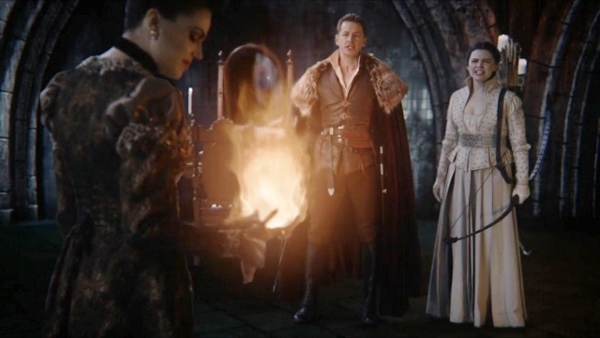 Then she opens a box of green magic.  She takes their song away from the Charmings. They have to speak instead of sing.  She tells them that love isn’t the strongest magic. She sends them back to their castle.

Snow is upset. The Blue Fairy (Keegan Tracy Connor) appears and tells them the magic wasn’t for them to use against the Evil Queen. It was for Emma. She is destined to face a great battle alone. She will have the voices of everyone she loves in her heart.

Henry sees the page where the Blue Fairy tells the Charmings about the songs.  He realizes that Emma was never alone.

Henry shows up.  He tells her about the songs inside her heart.  Her song isn’t a weakness…it’s her strength. And it’s the only thing keeping the Black Fairy from killing her. 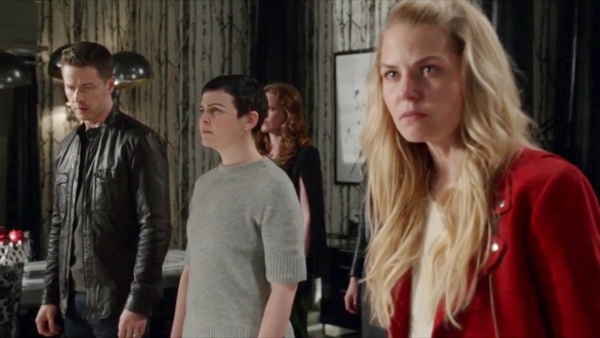 Song: The Song Inside of Me

Emma is able to use her song to unfreeze everyone.   Henry gives her back her heart.  The Black Fairy reminds everyone that her curse will be bad for everyone

Everyone goes to the middle of the town, on top of one of the buildings for Emma and Hook’s wedding. Emma is escorted by both David and Snow.   With promises to love each other forever, they are finally married.

The whole towns sings about happy beginnings.  All of that comes to halt when the Black Fairy’s curse is set off.  Emma tells Hook, no matter where they are taken, they are going to win. 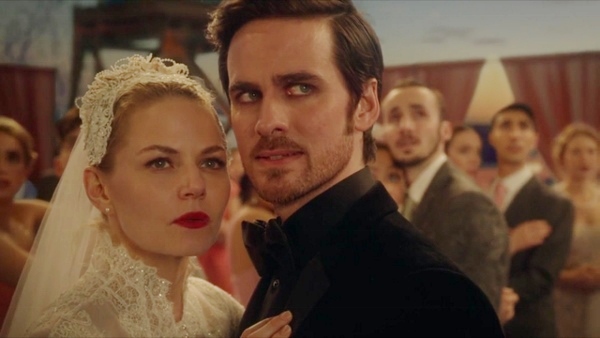