Murdoch Mysteries opens in Bristol England. The camera pans over the city and zooms in on a foot chase. Detective Murdoch (Yannick Bisson) sprints through the streets; however, this time he isn’t doing the chasing. He runs from two armed men. One of the men fires, hitting Murdoch in the arm. Looking increasingly woozy, he ducks into a pub, startling the proprietor (Lisa Faulkner). Looking nervous, the woman agrees to cover for him, just as his pursuers enter. It seems they are chasing a murder suspect. 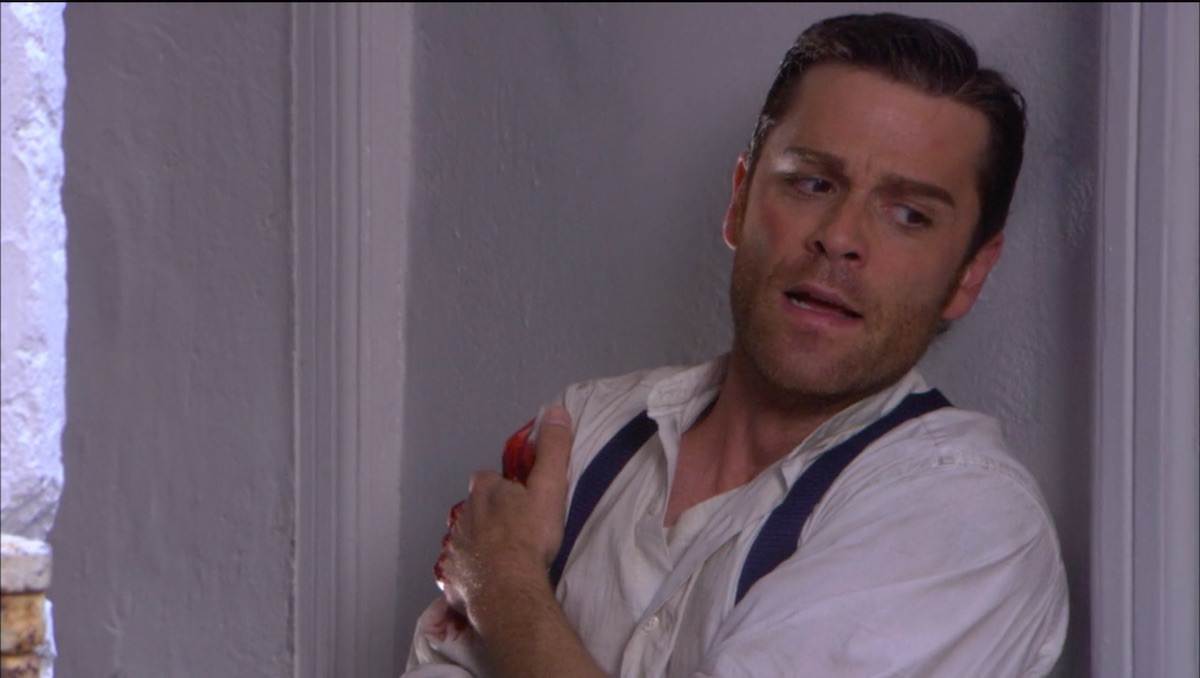 Convinced they lost Murdoch, the men finally leave. The pub owner then turns to the Detective, “Did I just help a murderer?”. He looks confused, “I don’t think so… I don’t even know my own name…”. It seems Detective Murdoch had quite the off-season hiatus…

Meanwhile back in Toronto, George (Jonny Harris) stares forlornly across the station. However, he looks up as he’s summoned to the Inspector’s (Thomas Craig) office. A new detective has arrived from Station House Five. This is Hamish Slorach (Patrick McKenna), and he’s just the man to take over for Detective Murdoch.

While the men get acquainted, they go over the details of Detective Murdoch’s disappearance. Apparently, Brackenreid discovered the Detective missing seven days ago when he failed to report for work. Detective Murdoch is never late.

Back in England, Murdoch does his best to clean his gunshot wound as he talks to the pub owner. He claims he woke up on a train outside Montreal, with no memory of anything. The only belonging on his person was a steamer ticket to Bristol in the name of John Dawson. What could be going on?

It seems the chase began when Murdoch arrived at an address for John Dawson. Ringing the bell, he asked after the man, but was immediately told (by the men chasing him) that Dawson died. When he tried to leave, the men promptly gave chase. 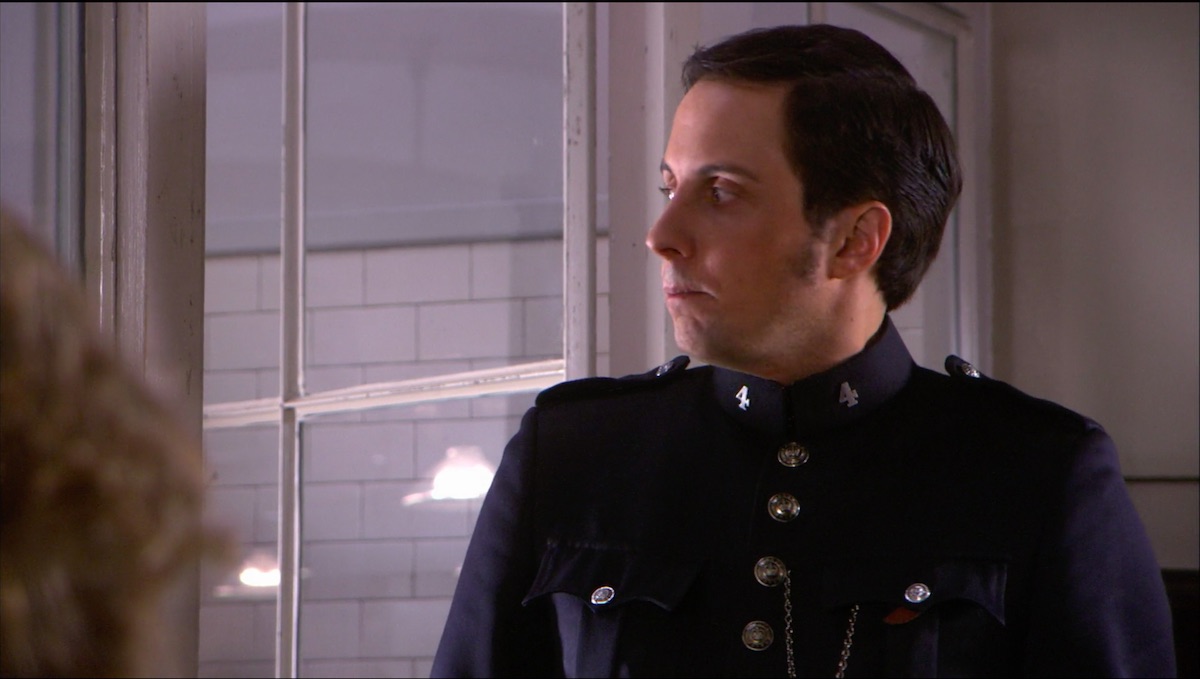 In Toronto, George enters the morgue as Dr. Ogden (Helene Joy) works. An overall sense of melancholy hangs over them. George barely fights back his emotion as he reports the discovery of a body near Detective Murdoch’s church. There’s a carriage waiting. The police need Dr. Ogden immediately.

When they arrive on the scene, it quickly becomes clear that the body does not belong to Detective Murdoch. The man (who loosely matches Murdoch’s description) died from a bullet to the brain.

Later, Murdoch sits with the bar proprietor. It seems her name is Anna. However, the quiet of the moment is interrupted by the arrival of the two men. When all seems lost, Anna lashes out with a frying pan, giving them an opportunity to run. The men shakily give chase, but Murdoch and Anna escape when he jumps onto bicycle. They flee to a church, giving them just enough time to make a plan. 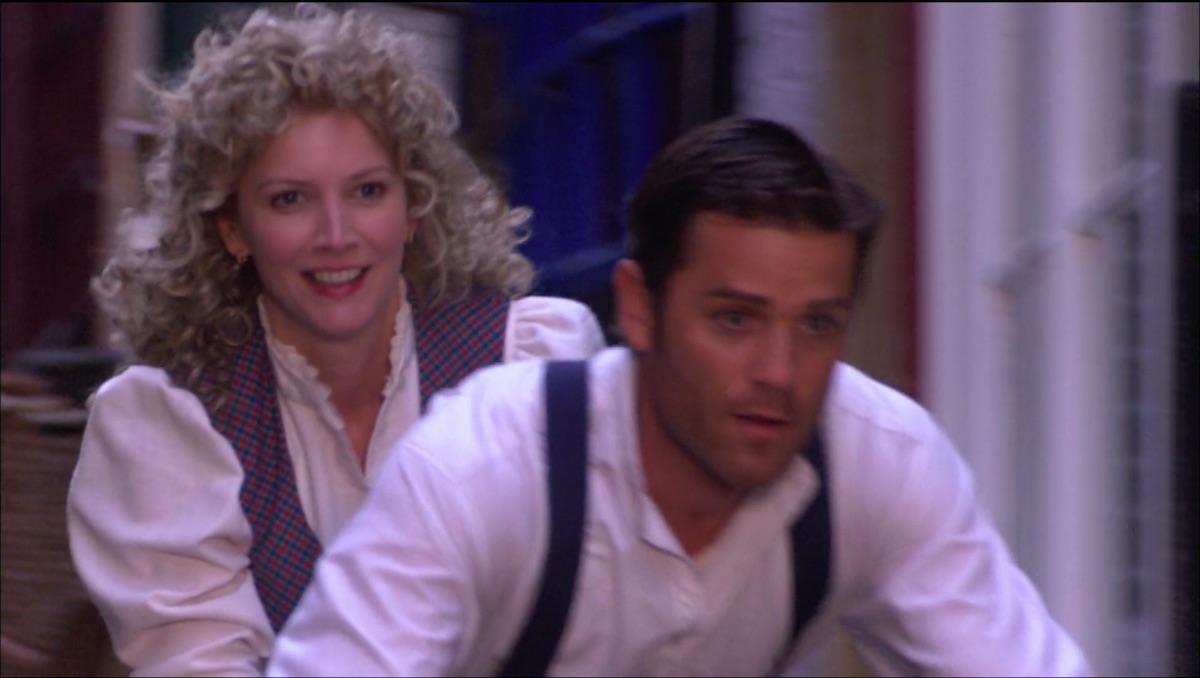 Meanwhile, the team in Toronto is hot on Murdoch’s trail. With the assistance of Julia, as well as Detective Slorach’s trusty hunting dog, they find themselves learning about John Dawson. It turns out the man was staying in Toronto. How could this fit in with Detective Murdoch’s disappearance?

All the clues point them to a man named Quinn (Dylan Smith). A local gunmaker, he crafted an extremely advanced, high-powered rifle. The weapon is capable of killing a man from the distance of a mile. Is this rifle responsible for everything? 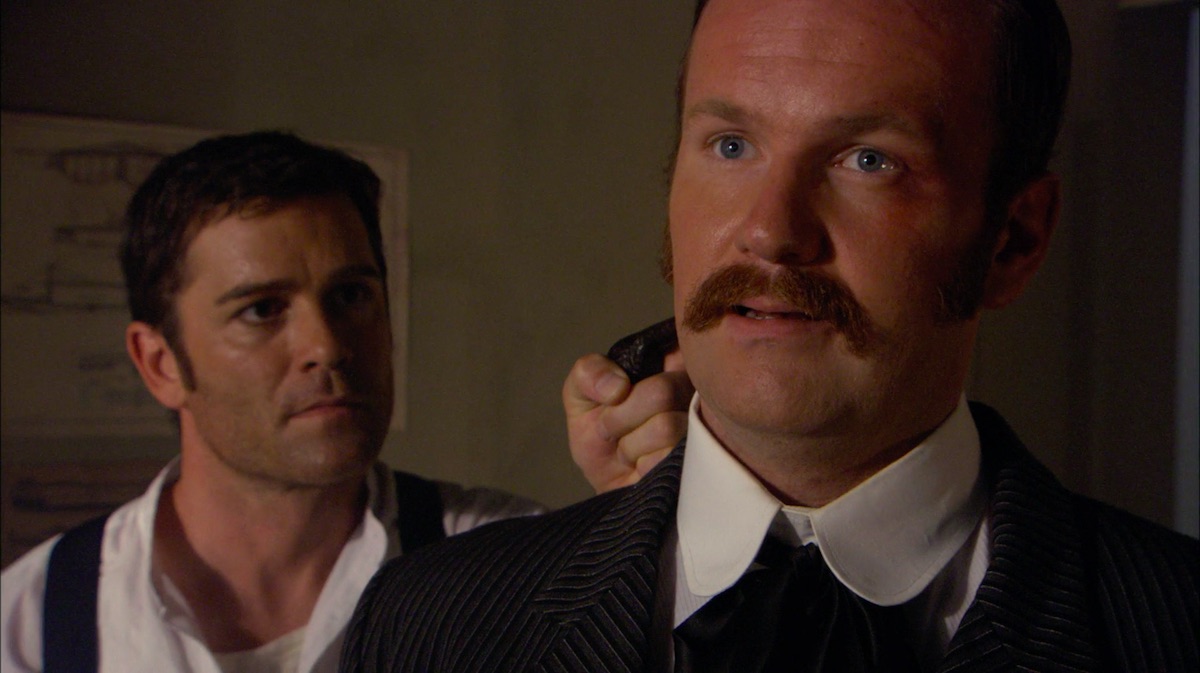 Back in England, Murdoch is starting to wrap his head around the case as well. He learns the name “Lord Treadstone”. He needs to figure out what this high government official knows…

In a superbly edited sequence, Murdoch is captured and interrogated by his captors while Inspector Brackenreid does his best to break Quinn, who is their only suspect.

Later, things finally click for Detective Murdoch. With Anna’s help, he discovers he stumbled onto the planning of an assassination attempt on Queen Victoria. Furthermore, a close member of her staff “Lord Treadstone” will be accompanying her. It seems the death of Queen Victoria, as well as that of Treadstone, would throw the country’s military into disarray.

Murdoch’s memory jars while he sits in the police station. Suddenly, he remembers everything. He knows who he is! Back in Toronto, he fell onto a moving train during a fight with the assassins. The resulting blow to the head must have caused his memory loss.

There’s a moment of tension as Murdoch rushes to save the day. There’s little he can do as the watches the approaching carriage. Can he get there in time? Getting an idea, Murdoch fires at the window where the assassin (Warren Kimmel) lies in wait. 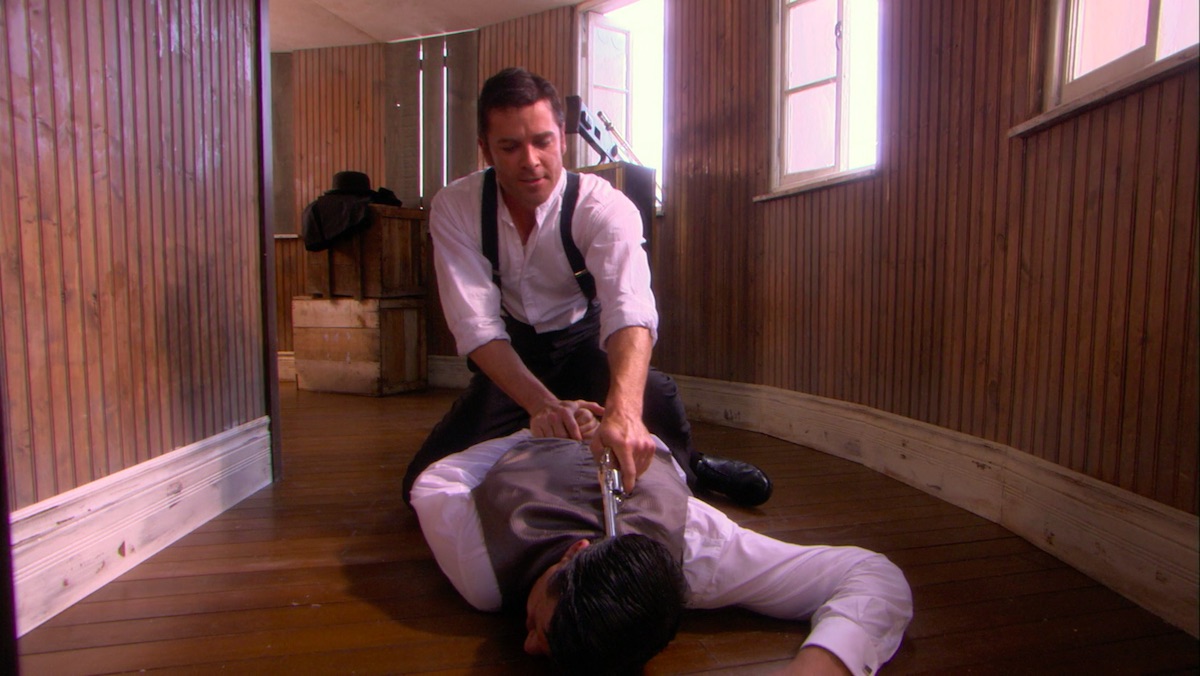 Using his persistence, as well as a little brute strength, Murdoch breaks inside and captures the assassin just as Queen Victoria’s carriage reaches the tower. Detective Murdoch saved the day once again.

While the episode comes to an end, William and Anna walk arm and arm through the streets. It seems the Queen brought Anna a ticket to New York. It has long been her dream to visit the city. They hug as William turns to leave. However, there’s the slightest twinge of regret in his face.

However, as the final credits roll Detective Murdoch arrives at Station House Four. He’s a little tired, and a bit jittery, but everything is as he left it. 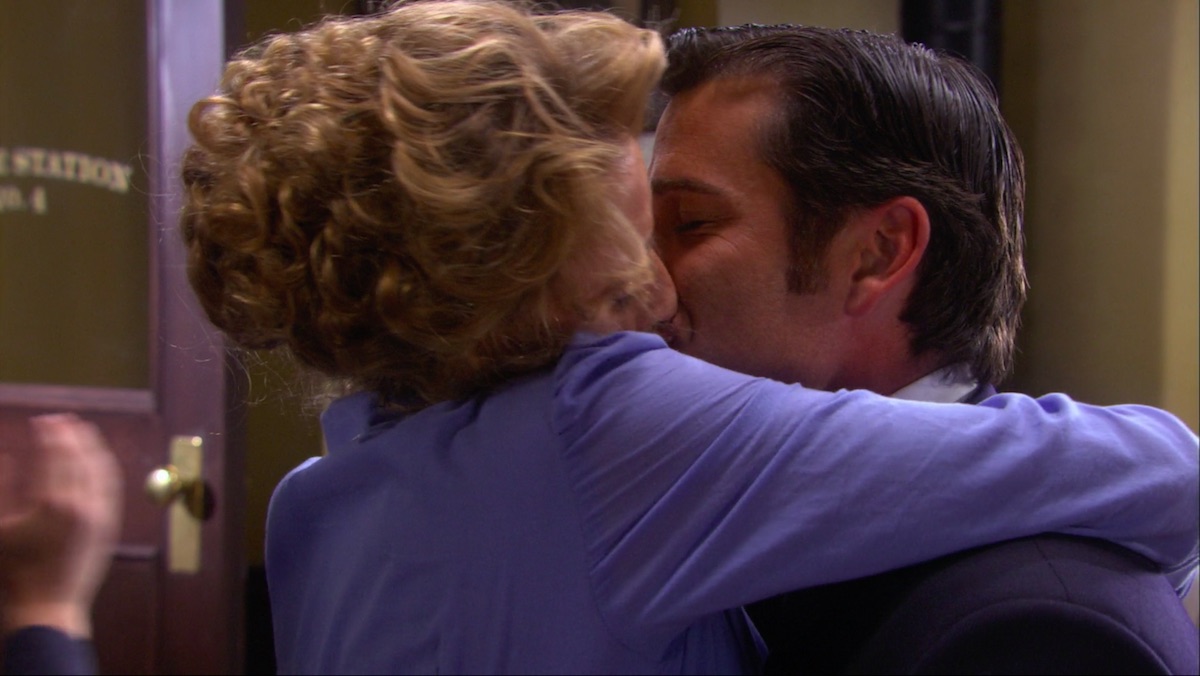 Season 11 of Murdoch Mysteries will return this fall. Stay tuned for more details.

"The best way to know yourself is to know others." --Philippa Georgiou (Star Trek: Discovery)

SNOWPIERCER: What to Know Before Season 3 Drops

Get to the replicator & order a prune juice, or some mud slop, or even some PESTO, & buckle in because @paramountplus just revealed its entire spring #StarTrek slate!
https://www.geekgirlauthority.com/star-trek-spring-2022-premiere-dates-and-pickup-orders/

'The Boys' Spinoff DIABOLICAL Gets Premiere Date and First Look