Home » TV & Streaming » MURDOCH MYSTERIES Rewatch: (S02E13) Anything You Can Do

MURDOCH MYSTERIES Rewatch: (S02E13) Anything You Can Do

MURDOCH MYSTERIES opens in the small town of Pringle Creek. With the exception of the gunfighters creeping through buildings, the town looks deserted. Suddenly, Detective Murdoch’s (Yannick Bisson) voice cuts through the stillness, “What on earth are you doing here in British Columbia, Father?”. Our favorite detective crouches inside a deserted tavern. An older man (Stephen McHattie) stands in front of him, rifling through a crate of liquor, “I can see why you would have a few questions…”. Gunfire suddenly breaks out, but the moment is interrupted by yet another voice. A strapping Mountie (Dylan Neal) stands by the door, smoothly firing at the villains.

While the men talk, the action flashes back. A caption reads 8 Days Earlier. Detective Murdoch cycles up to a crime scene, where Constable Crabtree (Jonny Harris) waits for him. 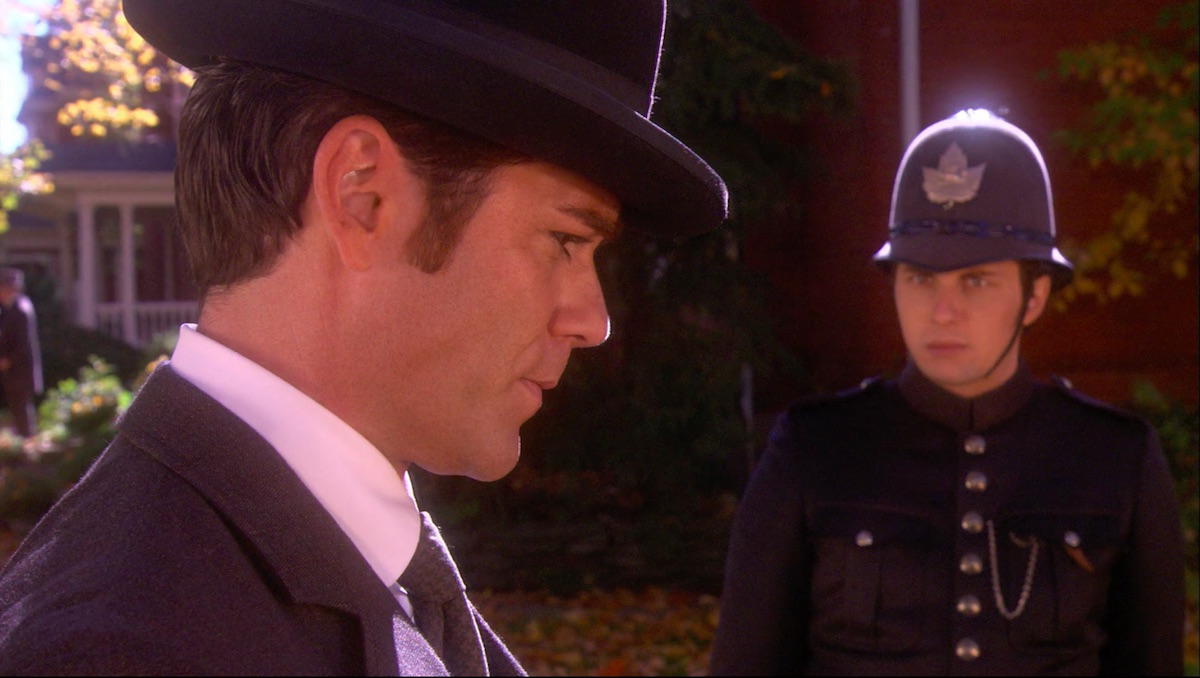 The Detective takes a quick look around the affluent city block. A geologist lies in the middle of a front lawn. By all appearances, the man fell from a window while trying to capture a butterfly. As Murdoch bends down to examine the body, Constable Higgins (Lachlan Murdoch) stops him. It seems, he has orders to not let anything disturb the crime scene.

Looking up, a Mountie stands nearby. It turns out, his name is Jasper Linney, and he represents the Northwest Canadian Mounted Police. He works quickly, taking statements from witnesses. It seems the officer is in Toronto investigating a murder which occurred six days earlier in his jurisdiction.

Meanwhile, the action quickly returns to Pringle Creek. Murdoch can’t seem to catch a break with the two men. While Jasper picks apart Murdoch’s logic (the two really are awfully similar…), his father seems to enjoy simply insulting him. However, this doesn’t change the fact they must find a way out of their current predicament.

Back at the crime scene, Dr. Ogden (Helene Joy) arrives to examine the body. She watches open-mouthed as Jasper and Murdoch argue about the case. Despite Jasper’s insistence, nothing in the case gives the appearance of murder. However, the mountie points out a single observation which renders Murdoch silent. It seems the butterfly is also the victim of a “heinous crime”. 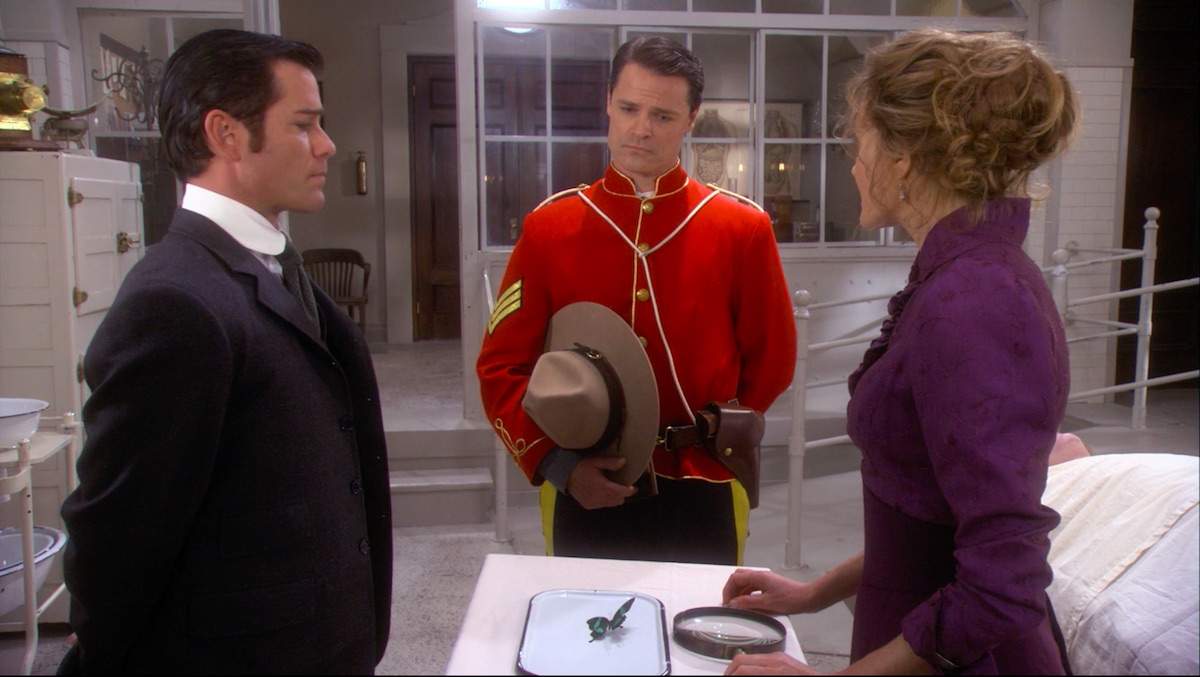 Later, they return to the station and Jasper reports on his investigation. He tells the men of Station House Four about the previous victim, Mr. Doakes. Police discovered the remains of the man’s body after apparently falling asleep on the railroad tracks. Interestingly, there was a business card in his pocket: Detective Murdoch’s.

The moment is interrupted by the arrival of Inspector Brackenreid (Thomas Craig). He’s just finished a phone call with Linney’s superior, and Station House Four will extend him every courtesy. This is far from what Detective Murdoch hoped to hear. However, Brackenreid cuts him off. “While he is bloody annoying, the man is never wrong”. Murdoch looks around, “I can’t imagine having to put up with this behavior on a regular basis…”. The Detective moves off in a huff. By himself, Inspector Brackenreid shrugs, “But somehow, I can”.

However, they soon learn Linney has gone to the morgue. While the mountie talks with Julia, it turns out the butterfly had in fact been poisoned. The insect would have already been dead when the victim discovered it. Julia looks up, “How often does a collector have the good luck to catch a specimen which is already dead?”. Suddenly, murder seems very likely.

Later, Murdoch and Linney throw themselves into their investigation. It seems their respective murder victims are linked by an ore sample. This could mean one thing… a big money murder.

While Murdoch works over a number of maps, the men talk about their pasts. However, discussing personal matters makes Detective Murdoch uncomfortable. Their conversation is thankfully interrupted by Inspector Brackenreid. It seems a killer nicknamed “Accidental Al” (Michael Kash) is back in Toronto. The man’s M.O. is making his murders look like accidents. Could this be the man they’re looking for? 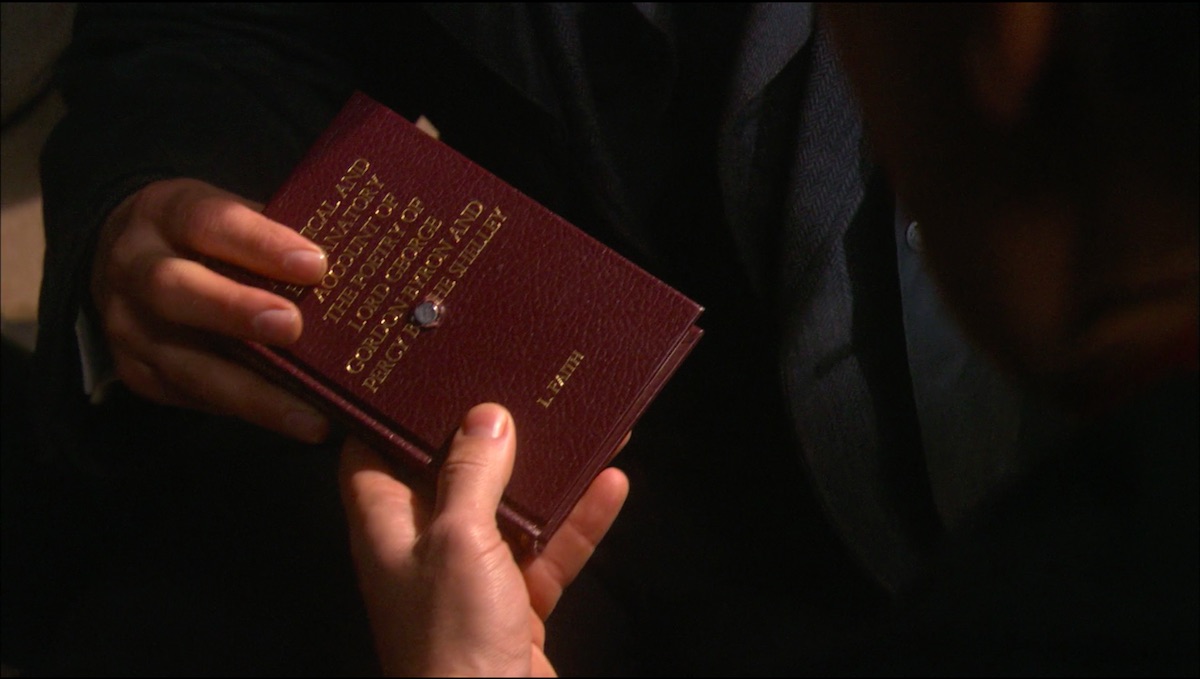 However, as Linney and Murdoch leave to question one of their suspects, they find the man crushed under a fallen bookshelf. Only a hand sticks out, clutching a copy of “The Collected Works of William Topaz McGonnagal”. Linney smirks, “It seems our victim has terrible taste in poetry”.

Meanwhile, the action jumps forward in time as the gun battle around the men rages on. There’s a moment of panic as Detective Murdoch is shot and collapses before he can reach cover. However, as Jasper pulls him to safety, it seems the bullet hit a book tucked into Murdoch’s pocket. Looking at the cover, it’s Byron and Shelley. Jasper smiles, “Never under-estimate the value of a good book”.

The scene once again flashes back to the morgue. A disgusted grimace crosses Murdoch’s face while he watches Julia flirt with Jasper as she performs her post-mortem. It seems they both share a fondness for Shelley…

Later, the men huddle in Detective Murdoch’s office. George enters, interrupting the conversation. The constable details how everything points towards a small town on the banks of Pringle Creek. While Murdoch scans over a list of local land holders, he sees a familiar name: his father. Detective Murdoch quickly leans to Inspector Branckenreid, requesting permission to accompany Linney to the rural town in British Columbia.

It doesn’t take long for Murdoch and Jasper to arrive at Pringle Creek. Moving through the streets, they discover the town deserted. While they discuss the crimes, the sound of breaking glass stops them in their tracks. 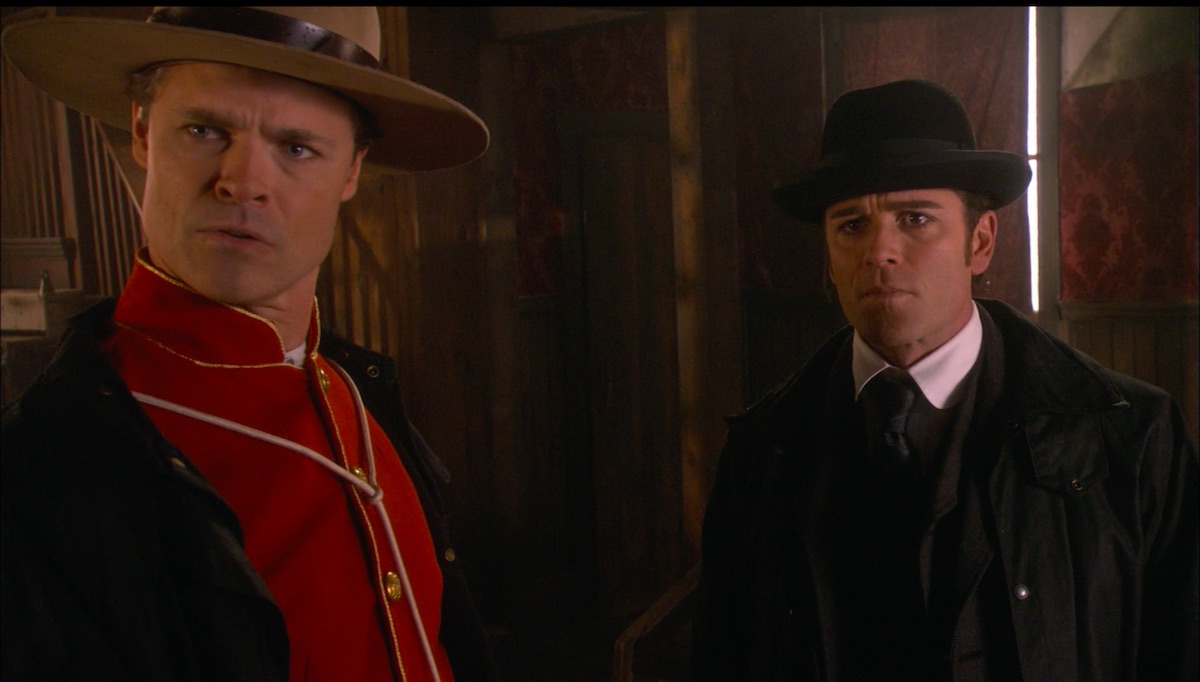 Entering a near-by building, Jasper and William immediately come face to face with an elderly man. Both men look stunned as they simultaneously exclaim, “Dad!”. It seems Murdoch and Linney are brothers.

While Inspector Brackenreid is hard at work cracking the case, Murdoch struggles to understand the sudden appearance of the brother he didn’t know he had.

Meanwhile, Brackenreid and Crabtree work quickly in Toronto. With the assistance of one of Murdoch’s many inventions, they manage to catch mine owner Mr. Freemont (Danny Cunningham) in a lie. It turns out, the man not only knew about “Accidental Al”, but also hired him. It seems Pringle Creek is at the center of a large mining scam, and each of the murder victims could have exposed the scandal… before they were killed, that is.

Later in Pringle Creek, Murdoch and Jasper launch into the final stage of their escape plan. After taking refuge in a local prison, they lie in wait. To outsiders, both men give the appearance of being wounded. As darkness falls over the the small town, the gunmen finally enter the prison. However, this is just what they were supposed to do. Suddenly, there’s  a blinding flash. Murdoch and Linney crafted a grenade… they really are brothers.

Later, Jasper gives Murdoch a bit of brotherly advice. Make it right with Dr. Ogden. They smile as Jasper reminds him that any woman who can recite Shelley while cutting open a human heart is a keeper.

As the episode comes to a close, Murdoch cycles up to Julia, who’s about to take a hot air ballon ride. While they talk, Murdoch looks up at her with a smile, “Do you think it’s possible for us to start again?”. Julia returns his smile, “Are you willing to let us see which way the wind takes us?”. He pulls himself into the balloon basket as it’s about to float away. It seems our favorite couple is back on.