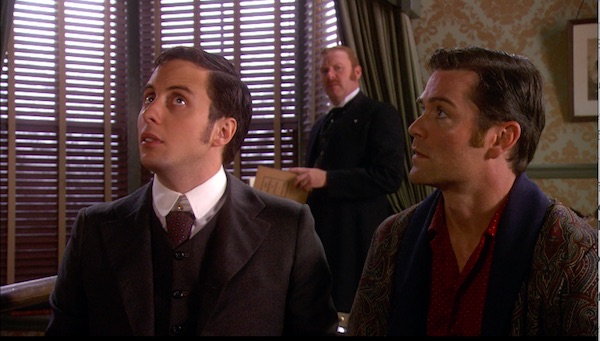 Murdoch Mysteries opens on a normal day in Station House Four. Inspector Brackenreid (Thomas Craig) addresses his men. Criminals are popping up all over Toronto, and the men of Station House Four are tasked with bringing them in. The constables snicker as Detective Murdoch (Yannick Bisson) picks up a package and cuts through the group without even acknowledging his superior officer.

Later, Inspector Brackenreid goes to speak with Detective Murdoch. However, before long Constable Higgins (Lachlan Murdoch) interrupts them. There has been a murder.

They quickly arrive on the bloody scene, but as Constable Crabtree (Jonny Harris) gives Detective Murdoch the rundown, a mysterious man interrupts them. The visitor stops dead in his path as he sees the officers. Could they have just interrupted the killer? Murdoch and Crabtree give chase. 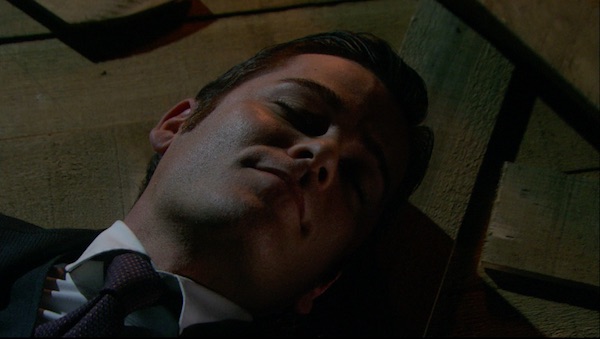 Murdoch climbs a ladder in close pursuit; however, he barely has time to react as it falls away from the building. George cries out as Detective Murdoch crashes to the ground, unconscious.

While the wounded Detective Murdoch finds himself with no shortage of female attention, Crabtree is hard at work. The young constable successfully convinces Inspector Brackenreid to make him acting detective. George has learned from the best after all. 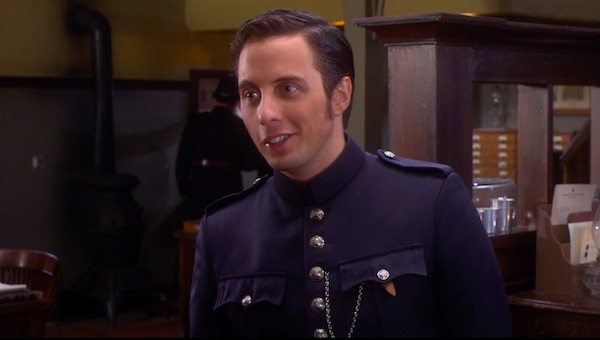 Later, Crabtree consults with Dr. Ogden (Helene Joy). George barely keeps his composure as Julia carefully inspects the victim’s stomach contents. Interestingly, not only did the man eat food from a fancy French restaurant, but also at some point his own finger. That’s right, a finger falls out of the man’s stomach. The Constables pour over the locations of near-by French restaurants in Toronto. However, much to George’s embarrassment, Brackenreid reminds them that the body was discovered outside of one. Could this be their crime scene? 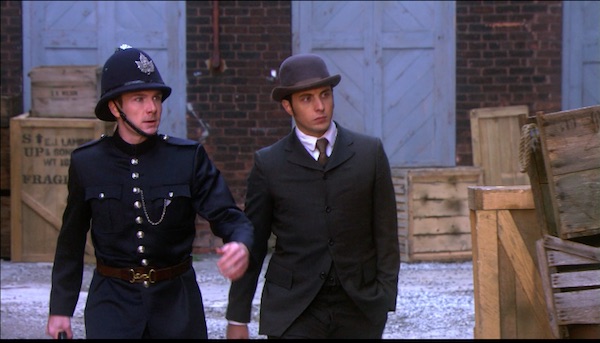 Crabtree and Higgins investigate the French bistro. Not only do they find the apparent crime scene, but also stumble on an extremely cheeky parrot. When Inspector Brackenreid approaches, the parrot seems to size him up before saying, “Go away cochon (pig) I spit at you!”.

Meanwhile, Detective Murdoch is bored. He reclines in bed and designs a night vision device as Enid (Sarah Allen) enters. He practically falls out of his bed as she tells him how she once designed a telescope with her son. It seems that Julia isn’t the only attractive, blonde, scientifically inclined woman in Murdoch’s life.

Later, George finally secures an identification on the victim. It turns out, the man is Pierre LaRue, the proprietor of the French restaurant. His former business associate Hugo Brighouse (Peter Cockett) informs George that Pierre actually chopped off his finger years before. However, he kept it in a jar as a reminder to his staff. Knives are dangerous.

Luckily for George, Constable Higgins speaks French. The constable looks around when the parrot says, “Mange le doigt,” Higgins points out this could be a vital clue. Essentially, the parrot is saying “Eat your finger”. Coincidentally, the victim ingested his own finger. Could the parrot have witnessed the murder? Suddenly, everything the parrot says takes on new meaning.

Meanwhile, Detective Murdoch can’t stop dreaming. He rolls over in bed and comes face to face with Julia, who’s dreamily rubbing his back. His conflicted inner turmoil over his feelings for Enid and Julia is coming to a boiling point. However, the pleasant dream turns to terror as he wakes up to a mysterious figure bent over him with a pillow.

George and Inspector Brackenreid visit Detective Murdoch when they receive word of the attempt on his life. However, the Detective is suffering from a high fever. Could it have been a dream? Or even a dream within a dream? George sits on the bed next to his friend. It seems Constable Crabtree once dreamed he could pull plums out of his navel… when he woke up, he found a plum sticking out of his belly button. They go up to the attic to investigate a strange noise. Unfortunately, the prowler is only a loose shutter.

Later, the attempt on Detective Murdoch’s life starts to make sense. He wakes from a fitful sleep to find a dead mouse in his food. It turns out his landlady’s friend (Martha Burns) is poisoning him with her terrible cooking. The woman had been taking care of Murdoch while his landlady Mrs. Kitchen (Dixie Seattle) visited her sick sister. He stands to look out the door, and catches sight of Joel Harris (Brian Frank). The man is one of the criminals Inspector Brackenreid mentioned in the early minutes of the episode. Something foul is afoot.

Murdoch sets a trap. As the woman enters his room, she attacks what she assumes is the sleeping detective with a golf club. Suddenly, the Detective kills the lights. It’s lucky Murdoch invented night-vision goggles in this episode. There’s only a brief struggle as he chloroforms her and sets after Harris. 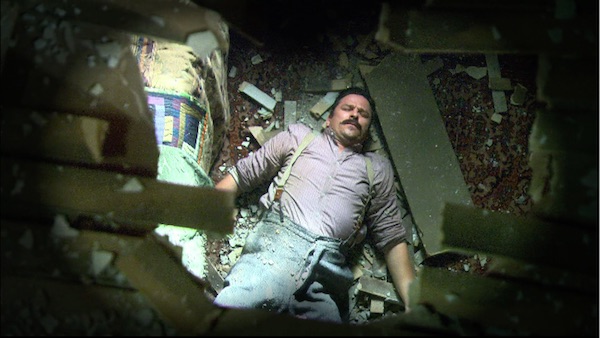 The two men meet in the attic, but Murdoch sends Harris falling through the floor onto the level below. Even wounded, Detective Murdoch is victorious.

At the same time, George finds himself stumped by the parrot’s continual defiance. He can’t figure out what trait reminds the parrot of the killer. Could it be the Inspector’s red hair? However, as Crabtree mimics the Inspector in a fit of annoyance, the parrot once again speaks. It seems it is reacting to an English accent. Suddenly, everything becomes clear. Hugo Brighouse is their killer. 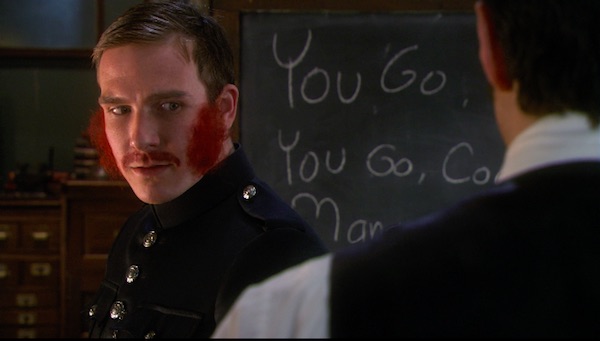 Later, George brings Hugo in for questioning. Struck with emotion, the man recounts how he and Pierre pranked each other with growing intricacy. One day, Hugo found Pierre’s finger in his lunch. When he came to visit his friend, the tension grew enough for Pierre to grab a knife, and there was a struggle. However, it seems the man’s death was an accident. 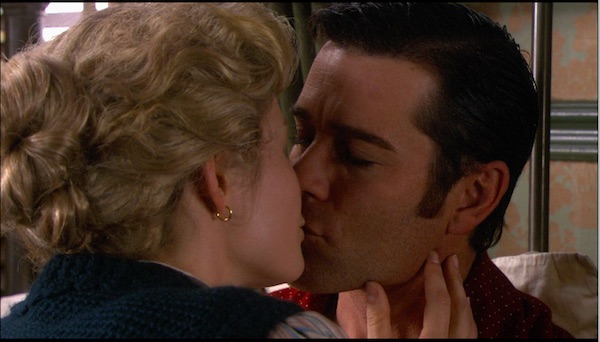 As the episode comes to a close, Enid visits Murdoch once again. He reveals that the two confidence tricksters were searching for gold stashed in the house by a former tenant. She leans in suddenly and gives Murdoch a full kiss on the lips.