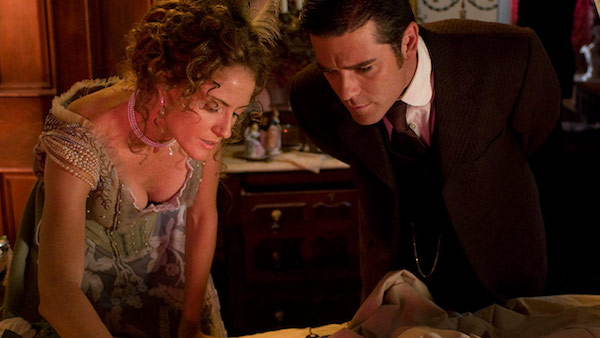 Murdoch Mysteries opens inside the “Weston Music Academy”. Despite the name, the building is actually a brothel, and a seemingly raucous party is in progress. Suddenly, a flaming bottle bursts through a window, and fire breaks out. As people hurry from the room, the Madam (Krista Bridges) runs back inside. Someone is missing in the chaos. As she opens a door, she stops in her tracks.

Later, Constable Crabtree (Jonny Harris) takes Detective Murdoch (Yannick Bisson) around the house as they discuss the details of the case. It turns out, the Madam discovered the body of Cora Devereux on her bed, the woman’s throat garroted. While they move through the crime scene, George finds a bottle of absinthe tucked into a drawer.

As Madam Weston once again enters the room, she asks to give her story only to Detective Murdoch. While the two walk and talk, they seem to have a history. In fact, Cora was one of her most popular girls. While Weston saw it as her goal to keep her girls happy and healthy, she never felt she did a good job with Cora.

Later, Detective Murdoch interviews Arthur Webster (Michael McMurtry) a local artist who reportedly had an obsession with Cora. Coincidentally, as a painter, the man also has easy access to turpentine, a primary component of the fire-bomb. Furthermore, he was also forcefully removed from the brothel the night before. However, he is able to provide an alibi, forcing Murdoch to continue on his way.

Meanwhile, Inspector Brackenreid (Thomas Craig) finds himself butting heads with Levi Beecher (Jonathan Potts), a fanatical member of the local Temperance movement. The man sees it as his duty to see the “Music Academy” shut down.

While Murdoch struggles with the course of his investigation, he goes to see Dr. Ogden (Helene Joy). In fact, she has worked out a few more details of the case. She reveals that this is not the first time Cora had been garroted. Upon cleaning the body, she discovered another scar lining the girl’s neck. Furthermore, as Dr. Ogden turned over the body, she discovered whip or lash scars lining her back.

Meanwhile, Paul Wilson (Matthew Edison) arrives at Station House 4. It turns out, his father is a local judge (Tom McCamus) who reportedly attended a party at the “Music Academy” the night of the murder. While he speaks with the Detective, he looks around as he pulls a bag from the floor. He shows Murdoch the contents, revealing bloodstained clothes.

Later, the Judge arrives for questioning. The man is a mess, but admits to being with Cora the night of the murder. However, there’s very little he remembers. He and Cora had been drinking heavily, and he passed out. When he woke up, he found Cora dead. While it seems like a stretch, he insists he didn’t murder her. In fact, he swears that he and Cora were deeply in love and were planning to marry.

After interviewing Webster once again, the line of suspicion shifts to Judge Wilson’s son. In fact, the young man admits to arguing with the victim. Not only did he doubt Cora’s motives, he also felt she only wanted to marry his father for his money.

However, as Murdoch looks over the contents of the fire bomb, Constable Crabtree arrives at the station. It turns out, one of their chief suspects has died.

Entering Webster’s studio, the death looks like a clear suicide. The man hangs from the ceiling. A confession is scrawled on a near-by painting: “Forgive me Cora”.

Unfortunately, as the investigation continues, there is something that doesn’t sit right with Detective Murdoch. Webster always called Cora “Miss. Devereux”. Why then, would he suddenly call her Cora in his confession?

As the rest of the team lie in wait, William and Julia enjoy a glass of absinthe over a picnic dinner. This is scientific after all, as the two hope to look at the effects of wormwood on the human body. However, as the intense drink overcomes them, they end up kissing passionately in the grass. As things threaten to heat up even further, Julia stops him. They don’t have any propholactics, and cooler heads must prevail.

The next morning, William pushes aside his absinthe induced hangover as Judge Wilson’s son arrives at the station. In fact, he’s fallen squarely into their trap as he produces the evidence he secretly purchased the day before. While he freely admits to framing the Judge, the young man becomes emotional when confronted with murder. He wouldn’t have “the gumption” to kill Cora, and Murdoch is inclined to agree with him.

However, as William returns to speak with Julia, she has just received toxicology results from the Arthur Webster post-mortem. It turns out, there was laudanum in his system. Could they both have been drugged?

It turns out, Cora received a package the morning of the murder. Coincidentally, there was a bottle of absinthe inside. Someone knew her fondness for the drink. At the same time, Murdoch receives a report on the contents of the fire-bomb. While they had assumed the bomb was laced with turpentine, it turns out to be a different chemical. Suddenly, all attention shifts to Beecher. The man not only has motive, but he also had the means to commit the crime.

As they pull him in for questioning, it turns out Beecher knew Cora in Montreal. It was he who left the earlier scar on her neck. In fear the certain sexual proclivities he felt, he fled to Toronto and joined the Temperance League. However, when he once again met Cora and felt the… stirrings… he decided he must kill her. Poor Webster was Beecher’s sacrificial lamb to shift blame from himself.

Previous seasons of Murdoch Mysteries can be viewed on Netflix as well as iTunes. Current episodes air in Canada on CBC. Viewers in the United States can watch it on Ovation as The Artful Detective.