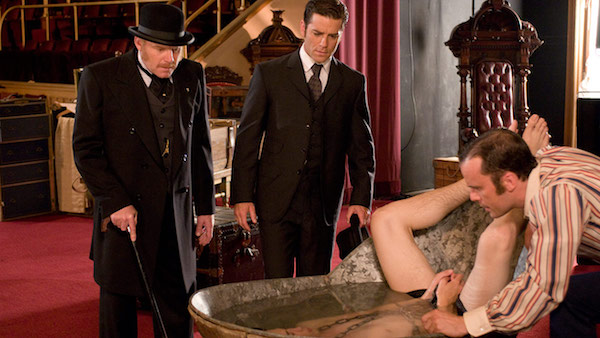 Our episode opens in Station House 4. The eyes of the Constables are drawn to the center of the room as a young man struggles to escape from a straitjacket. There’s an excited gasp as he finally succeeds. This is Harry Houdini (Joe Dinicol). He stands up with a smile, announcing that “The Houdini Brothers” are performing in Toronto that very night.

Under pressure from Inspector Brackenreid (Thomas Craig), Detective Murdoch (Yannick Bisson) agrees to take Dr. Ogden (Helene Joy) to Houdini’s show. They do both need a night out. They watch in awe as Houdini works through his act, showing the tricks he became famous for later in life.

Meanwhile, a bank robbery is in progress as Houdini disappears for one of his greatest escapes. He’s off stage for 11 minutes. Quickly, the action cuts to the outside of the theater as Houdini appears to be seen ducking back inside. As Houdini reappears at the back of the auditorium, a man bursts in, announcing the robbery. He points a direct and accusing finger at Harry Houdini.

As the investigative team tours the bank, the robbery seems almost impossible. There is no way the vault could have been breached. To make matters worse, a security guard was also killed in the attack. This is a murder.

Julia and William step outside, only to be stopped by a vibrant young woman. Julia pulls back. It turns out the girl is her younger sister Ruby (Sarah Gadon). Julia isn’t the only progressive woman in her family. Ruby has been traveling the world as a journalist. In fact, she’s most recently been working on a profile of author H.G. Wells. As they climb into a carriage, there’s a note of tension between the sisters.

Later, Murdoch and Inspector Brackenreid revisit the theater. While they poke around the stage, they discover that Houdini would have been able to commit the robbery. He performed an escape, but the safe in which he was locked had a false bottom. Had he slipped his chains quickly, he would have had plenty of time to get to the bank.

Back at the Station, Constable Crabtree (Jonny Harris) tells his superiors his newest theory. They look up at the vent, could Houdini have used it? Like clockwork, the vent falls open. Ruby Ogden sticks her head out, “A little help, gentlemen?”.

The episode finally gives viewers an insight into Julia through her interactions with her sister. As Dr. Ogden conducts her post-mortem, Ruby hovers nearby and the two women talk. They discuss their family, Ruby’s smoking habit, and even the body’s chemistry. However, when the subject of Detective Murdoch comes up, Julia pulls back nervously. This is too personal a topic for the good Doctor.

As the women continue, Julia discovers an important clue. While the cause of death initially appeared to be a blow to the head, it turns out the man was poisoned. Murdoch stares at the details of the case and wonders, could this have been an inside job?

It turns out, it’s virtually impossible to keep an escape artist in prison. Before long, Houdini has gone missing.

Meanwhile, poor Murdoch blinks and finds himself out to dinner with the very aggressive Ruby. The girl, sensing her sister’s attraction to the Detective, sticks her nose where it isn’t wanted. However, Julia quickly stumbles on their little dinner. In fact, Constable Crabtree had spilled the beans to Julia when she arrived at the station with news.

Before long, the case becomes more complicated when they discover the body of the bank manager. The man was murdered. George wonders, “How can it be an inside job, if both inside men are dead?”. In fact,  a third man is involved. Who could it be?

Later, Murdoch returns to his office and is met by the recently rediscovered Harry Houdini. In fact, Murdoch has become increasingly sure of Houdini’s innocence. Sitting in the dark office, the men talk about the feats of trickery at work in the robbery.

With a little help from Houdini, Murdoch and the team return to the bank where he demonstrates the execution of the robbery. In fact, the vault’s supporting wall failed. There were no problems with the door. Talking through the details of their case, they quickly settle on the killer.

Meanwhile, Leopold Romanov (Joris Jarsky) is trying to make a quick escape from the theater where the man had worked as the other “Houdini Brother”. However, his attempt is stymied by the arrival of Team Murdoch. It turns out, Romanov met both victims when they served jail time together. It was there that they planed the complicated bank robbery. Through Romanov’s work with Houdini, he learned the art of the escape and the tricks he used to rob the bank.

As the episode comes to a close, Murdoch arrives at the morgue as Ruby prepares to leave. Once again alone with Julia, a buoyed Murdoch asks Dr. Ogden out to dinner with him. Both beam proudly as she gleefully accepts.

Murdoch Mysteries can be streamed on Netflix and Hulu. New episodes air Monday nights on CBC. Viewers outside Canada can watch on Ovation as The Artful Detective.