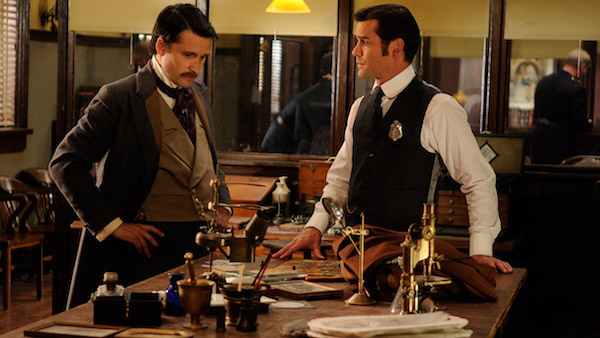 The episode opens as a young woman (Molly Shanahan) walks quickly through the streets of Toronto. She stops as a carriage pulls up next to her. She looks nervous as she climbs inside.

Later, Inspector Brackenreid (Thomas Craig) finds Detective Murdoch (Yannick Bisson) locked in his office. Murdoch is crouched over his desk, hard at work on a new invention. He flips it on, flooding the office in ultraviolet light. Brackenreid passes Murdoch tickets to an upcoming gala which he will be unable to attend. As Murdoch tries to give them back, Constable Higgins (Lachlan Murdoch) enters. There has been a murder.

The “gutted” body of Alberta Williams is sprawled in a wooded section of Toronto. As they stare at the body, a British Detective (Alastair Mackenzie) hurries up to them. This is Detective Scanlon. It turns out, he knows who the murderer is, and it’s imperative that they stop him.

Back inside Station House 4, they talk with the Detective. He tells them that the suspect is Harlan Orville. He’s been following the man as he zigzagged across the British Empire, and with each stop he’s killed eight women. He looks to Brackenreid as he mentions the startling similarities between the girl’s murder and the Ripper killings in Whitechapel. Brackenried tenses up, it turns out that he was in Whitechapel during the infamous murders.

After receiving the unsurprising post-mortem results from Dr. Ogden (Helene Joy), Murdoch leaves to visit Alberta’s mother (Wendy Lyon). She maintains that the girl worked a twelve hour shift at the hospital laundry before returning home. She verifies that her daughter had worked as a prostitute at one time, but vehemently denies that she’d returned to her old ways.

Later, they return to the Station House where Detective Scanlon brings a peace offering to Constable Higgins. The two clashed early in the episode about a checker board. Together, the two men stare at the board as Scanlon teaches him how to play Snakes and Ladders.

As the work day comes to an end, Murdoch arrives at an apartment. There’s an adorable moment as he enters, and is immediately thrust into dance lessons.

The next morning, they receive word of another murder. Looking up, there’s a a message above the body: TRY AND STOP ME. The message is scrawled in the woman’s blood.

Later, Murdoch pays a visit to Julia, who has just concluded the second post-mortem. There are a number of troubling details of the case. Before he leaves, Murdoch collects himself and invites Dr. Ogden to the ball. She gleefully accepts.

Meanwhile, the Constables have discovered a missing carriage. Looking over the scrubbed clean interior, Murdoch looks excited. This is the perfect opportunity to try out his new invention. As Murdoch flips on the light, the men look horrified. They have found their crime scene.

As Murdoch arrives for his dance lesson, it turns out he will partner a new student tonight. As the girl turns around, it’s Dr. Ogden. There is a priceless moment as the two awkwardly dance together, barely keeping themselves calm. An awkward silence hangs over them as they dance. However, as Murdoch mentions the case, they are suddenly adorably at ease.

Later, as Murdoch returns to the Station House and discovers that they’ve pulled in another suspect. The man is not only a recent British immigrant, but also works at a slaughter yard. However, while the man freely admits to being a peeping tom, he fiercely denies having any part in the murder.

While he speaks with Brackenried outside the room, Murdoch decides that he doesn’t believe they have the killer. However, they are interrupted as George (Jonny Harris) sprints up, “There’s a problem with the prisoner”. As they reenter the cells, the man has captured Constable Higgins and holds a knife to his throat. When things seem lost, there’s a gunshot and the man crumbles to the ground. Detective Scanlon stands behind them, his gun drawn.

Dr. Ogden works late in the morgue as Detective Scanlon arrives. He tells her that he’s leaving, and wishes to take her out for dinner. However, there’s something about the moment which feels awkward, and Julia begs off, telling him she has to work.

Meanwhile, Detective Murdoch finds himself at the YWCA after receiving a lead from Alberta’s Mother. While he questions the head of the organization, she tells him that one of his men has already been there. This starts Murdoch thinking, and he quickly has a lead. He finds identical fingermarks on the carriage as well as the Snakes and Ladders board, and quickly determines the killer must be Scanlon. Furthermore, they receive a telegram from Scotland Yard. In fact, a Detective Scanlon did work for them, but he died pursuit of Harlan Orville.

At the same time, Dr. Ogden is still hard at work. She looks up as she hears a noise deep inside the dark morgue. Turning around, Detective Scanlon hovers over her menacingly. Julia quickly figures it out, and runs. The morgue is silent as the police finally enter. They find a rattled Julia crouched in the corner. Nearby, Scanlon leans against the wall, a pair of surgical scissors protrude from his chest. “Tell Doctor Ogden, thank you”. With that, he dies.

Later, Detective Murdoch arrives for his dance lesson. He is surprised to see Julia enter as well. “Tonight, more than any night, I would very much like to be held,” she tells him. For the first time, she leans into him as they dance; they drop into a comforting silence.

Murdoch Mysteries airs in the United States on Ovation as “The Artful Detective”. New episodes drop on Ovation (and CBC in Canada) on Monday nights. Previous seasons are available both on Netflix, as well as on DVD.