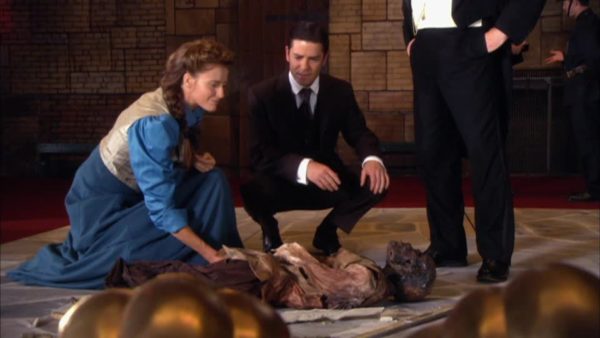 “It’s called a kinetoscope!” Detective Murdoch (Yannick Bisson) says, as Inspector Brackenreid (Thomas Craig) readies to leave Station House 4. The officers excitedly crowd around the new fangled invention. Brackenreid, on the other hand, is an efficiando of the theater. “Shakespere is playing at the Grand!” Brackenreid says, hurrying from the office.

Brackenreid sits through Macbeth, riveted by the action on stage. However, murder seems to follow the men of Station House 4. As the play reaches it’s climax, a body falls through the ceiling, nearly crushing an actress in mid-monologue.

Dr. Julia Ogden (Helene Joy) and Detective Murdoch arrive quickly. As she looks at the body, Dr. Ogden reports the body is male, and was likely hidden for at least a year.

As a result, the only clue to the victim’s identity is his jacket, which is hidden in the ceiling with the body.

The first step in their investigation is to question the acting group, who wait in their dressing rooms. Arthur Wellesley (Paul Miller)  and Stella Smart (Kate Trotter) manage the theater, as well as fill the leading roles within the company. Ellen Granger (Amy Rutherford) and David Martin (David Christo), two fellow cast members, also find themselves swept up in the investigation. A group of challenging personalities, they hardly given the investigators what they need as the interview comes to an end.

Meanwhile, Murdoch returns to the station and goes through the victim’s jacket. Inside, he finds a worn newspaper article. With George (Jonny Harris) assisting, they set to work deciphering the old piece of paper. While they stare at the sequence of letters, trying to fill in the missing pieces, George says, “This could make a really wonderful game!” As they continue to look at the worlds, George’s best guess is “Sick Children Orange…”. Giving up for the moment, Murdoch sends him out for more newspapers.

Murdoch returns to to Dr. Ogden, who’s gleefully boiling the rotting flesh off the skeleton. She turns to Murdoch, a wide smile on her face, as she quotes from Hamlet’s “Alas, Poor Yorick” speech. “ A little morgue humor,” she says, showing viewers again why Dr. Ogden is one of the best characters to grace television screens. She has ascertained that the man was in his 40’s, with a case of painful arthritis. There is a knick in one of his ribs, suggesting stabbing as a cause of death. They also find a pair of ivory dentures, probably their best clue to the identity of the victim.

Murdoch goes to visit a dentist, hoping to find out more about the dentures. He catches the man, right in the middle of drilling a cavity using a manual drill without the aid of anesthetic. It’s a scene liable to make the most solid dentist goer cringe. As Dr. Murphy steps outside to talk, he smirks. “Better make this quick Detective, when you leave them alone, they tend to run…”. Looking at the teeth, he’s not only able to provide a name, but a date. “An artist never forgets his work”.

They return to visit Stella and Arthur, who are stunned to find out that the body belonged to Virgil, Stella’s long deceased husband. In a state, she recounts that at the wake she couldn’t bare to look at the body; and as a result, requested a closed casket. Hence, she never actually saw his body. The couple discusses the time around his purported death, telling Murdoch that there were some “questionable sorts” around the theater during that time, who were trying to encourage Virgil to sell. Thus far, this seems to be their only lead.

Murdoch and Dr. Ogden head to Virgil’s grave as they attempt to answer Stella’s question. “If that was Virgil, then whom did I bury?”.

As they stare at the two skeletons, Dr. Ogden points out that the two men likely had more than a passing resemblance. The two agree that the identity of the as of yet unknown victim, likely holds the key to the case.

They set about interviewing the various members of the acting company. As they talk to each, the stories match up seamlessly as they recount the night of Virgil’s desk. Each alibis’ each other neatly. They had been celebrating a successful show, as Virgil tallied the receipts in his office. When he didn’t emerge, and they were unable to roust him, they called the police to break down the door where Virgil was slumped over his desk, dead. It was quickly labeled a heart attack.

The sequence is suspicious. Even Brackenreid in his skepticism is prepared to admit that. The police admit, that while stress has the ability to fuse memories, it seems strange that four people have such identical memories. It seems like they’ve rehearsed their stories.

As William paces his office, contemplating a next step, Julia returns. She is well acquainted with the reputation of Dr. Watkins, the physician who delivered the cause of death on Virgil. It seems the now deceased Doctor had a penchant to misdiagnose. While it would have been unlikely to mistake a stabbing for a heart attack, Julia points out that the other victim had been strangled. This cause of death could have been easily mixed up with a heart attack. Thus, it’s tremendously easy to see how the bodies could have been switched.

They return to the theater. Murdoch and George go over Virgil’s office carefully. However, no one could have gotten in or out with the door locked. At the same time, George discovers a secret corridor, only locatable after pulling a copy of Macbeth from the shelf. Inside, there’s broken glass, and a large bloodstain. Judging by the bed and comfortable surroundings, Virgil had been using the room for trysts. Murdoch looks up, “Gentlemen, I believe what we have here is the real murder scene.”

While Julia’s hard at work identifying the second victim, Murdoch once again makes the rounds throughout the company. He collects fingermarks, and asks every question he can, trying to coax any slip from the highly trained Shakesperean actors.

He brings Julia’s completed skull to the theater. As he presents it for the actors to identify, Ellen gasps. They identify the second body as Eddie Green. He was another actor in the company. However, no one is surprised that he passed away, let alone that he was buried in Virgil’s grave.

In this highly unusual case, Murdoch brings the entire company together. He tells them they’re going to reexamine some elements of the crime, to make them clearer for him in his investigation. While they work through the scenario, Murdoch is putting things together in his head. Could none of the men have broken down the flimsy door? Consequently, when they finally got inside, why did no one rush to Virgil’s aid?

Murdoch throws in a complication. While Inspector Brackenreid and Julia stand in for Virgil and his paramour, Stella becomes increasingly uncomfortable. It turns out, Stella had caught her husband seducing Ellen Granger. Cracking at the sudden reveal, the actress admits everything. The sight so enraged her, that she didn’t remember driving the letter opener into her husbands chest. After the murder, the company came together, eventually convincing her to hide her husband’s death. As Stella talks, she reveals that Arthur had killed Eddie, using him to disguise Virgil’s true cause of death.