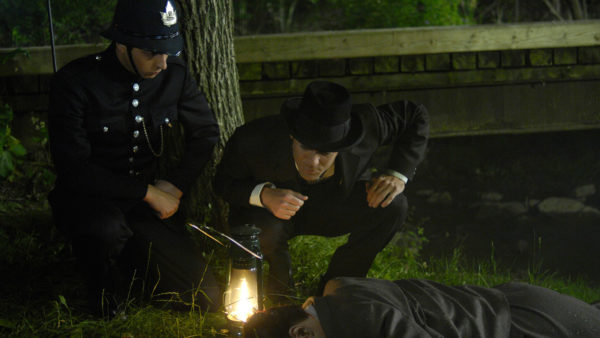 Our episode of Murdoch Mysteries opens in an underground fighting ring. A terrier takes on a ring full of rats, as people gleefully bet on the action. As victory is called, a fight breaks out among the rough crowd of attendees.

Murdoch Mysteries’ case of the week occurs shrouded in darkness, as two men stumble from the pub and into the woods. According to Constable Crabtree (Jonny Harris), the victim is John Delaney (Michael Rhoades), one of the organizers of the fighting ring. Police found his body floating in the river, all his winning’s missing. “Robbery it would seem,” the young constable informs Detective Murdoch (Yannick Bisson).

As the constabulary searches the area, they stumble on a drunkard passed out near the body. As Detective Murdoch investigates, he sharply pulls back. He looks up. “I know this man. His name is Murdoch, Harry Murdoch. He’s my father.”

Returning to Station House 4, Murdoch argues with Inspector Brackenreid (Thomas Craig). He needs to be removed from the case. With his request denied, a defeated Murdoch leaves to conduct his interviews.

His first visit is back to the pub, where Murdoch interviews the victim’s son, Philip (Dylan Taylor). The boy found his father’s body floating in the river. The young man has some processing issues, and as a result, he’s a difficult interview. However Murdoch is gradually able to get through to Philip as they bond over their watches. While he appears to have trouble expressing himself, the way into Philip’s head is through units of time, for which he has a photographic memory.

Returning to the station, Murdoch dives into an interrogation of his father (Stephen McHattie). Harry is still drunk from the night before, noticeably slurring his words. As Murdoch sits down, the two men look each other over; however, Harry doesn’t recognize his son. “Do I know you?” He asks. William’s response is curt, “No”.  As the interview comes to a close, with Harry sticking to a denial of his involvement, William finally exposes his identity. “My name is Detective William Murdoch”. Murdoch’s expression is unreadable as he exits the room. Harry, finally recognizing his son, cries out in the background, “Willie!”.

While Murdoch finds himself wallowing in the past, there’s a flashback. A young William Murdoch (Jacob Ewaniuk) wanders through the woods, coming upon the dead body of a woman (Taryn Ash) floating in the river. He rolls the woman over, and pulls back in horror.

Murdoch retreats to Dr. Ogden’s (Helene Joy) office, where they discuss the murder. While she knows the victim’s cause of death was the three, deep blows to the back of his head, Julia can’t ascertain the murder weapon. While the discussion continues, and Dr. Ogden defends Harry Murdoch, William pulls away. He has a history with his father, which he isn’t taking about.

Murdoch and Brackenreid return to the pub. While Brackenreid talks with the bartender, Vincent Newcomb (Shane Daly) about the Kentucky Derby, Murdoch sneaks through the barn, looking for clues. Murdoch is attacked by a guard dog, but before he is exposed, he drugs the dog with one of the suspicious bottles he’s liberated from the scene.

Dr. Ogden informs him that the bottles contained: chloroform, laudanum and cocaine mixtures. It seems like someone was drugging the dogs.

Harry Murdoch verifies the dogs were being drugged. However, this only verifies his motive, according to his son. There’s a disconnect between Father and Son, with William referencing, “We know what kind of man you become when you’re drinking”.

Due to hitting an impasse with his Father, Murdoch once again returns to the pub. He speaks with Walter Lacey (Billy MacLellan), who verifies that Delaney and Newcomb knew about the doping scheme. Consequently, the young man also claims to have nothing to do with Delaney’s death.

Murdoch also bumps into Philip, who recounts an argument between Delaney and Newcomb the night of the murder. As Murdoch leaves, the camera shifts down to show Philip’s bloody knuckles.

In addition, Murdoch once again interviews his chief suspect, Newcomb. The man maintains he was walking home at the time of the murder. However, his route would have taken him directly passed the crime scene. Hence, there was no way Delaney would have missed the body. As a result, this gets the Detective thinking. What happened during those missing moments? Furthermore, is there something he hasn’t figured out yet?

William returns to visit his Father. As the men talk, more of their past emerges. William blames Harry for the death of the woman in the flashback. He says, “If you wouldn’t have hit her, she would have never fallen into the water…”. It turns out, the woman in the river was Murodoch’s Mother. One day, she had finally had enough of Harry’s drinking, and was trying to protect her son when she fell, hitting her head.

Emerging from the interview, there’s a note waiting for Murdoch from Dr. Ogden. When they meet, Julia mentions that she discovered an abrasion on Delaney’s penis. Murdoch realizes this could be the clue to the missing minutes. Maybe, Delaney had a “rendezvous”? Dr. Ogden smiles, “I would suggest a vigorous one…”.

Murdoch pays another visit to Mr. Lacey. While speaking with Newcomb, the man had implied that Delaney had been making advances towards Mrs. Lacey. While Walter sticks to his story, Murdoch finds a hoe with blood on it. The murder weapon, perhaps?

Murdoch delivers the weapon to Dr. Ogden, asking her to determine if the blood is human or animal. She tells him it isn’t possible. However, it is. After some light reading, Murdoch knows how to do it. While they work together, in agonizingly will-they-or-won’t-they fashion, their relationship builds all the more as they pass vials to each other. Consequently, they are giddy as they discover the blood is human.

Returning to the barn, there’s a twist. The discovery of Delaney’s missing prize money seems to further ensure Mr. Lacey’s conviction. However, as they attempt to arrest him, Mrs. Lacey (Lindsey Connell) comes forward. She tells them that her husband couldn’t possibly have killed Delaney. When asked why, she informs them that she did.

Mrs. Lacey details how Delaney had made advances on her. The night of the murder, she says, “He wouldn’t take no for an answer”. She claims to have followed him after the assault, killing him. However, there’s a flaw in her story. Murdoch immediately figures it out she details how sh pushed the still breathing Delaney into the river. Dr. Ogden had already revealed that the cause of death was the blow to the head, not drowning. Mrs. Lacey didn’t commit the murder.

As Murdoch brings Philip in for another interview, everything becomes clear. Philip had stumbled upon the rape. And Murdoch seems like he understands Philip’s mindset. Seeing someone who should have loved him (his father), hurting the one person who actually cared for him (Mrs. Lacey) had made the boy crack. Philip wanted nothing more than to protect her. Consequently, there’s a direct parallel between William and his relationship with his father.

As Murdoch and his father have one final face to face. Harry claims that the story wasn’t quite how his son remembered it. Everything in William’s memory was right, except for one thing. Harry never hit his wife. She slipped, cracking her head on the floor. In a grounded showing of vulnerability Harry admits that he loved his wife, and that he never would have hit her, or his son for that matter. He leaves Murdoch, saying “There’s a lot of good opportunities out west…”. Even at this early point, Murdoch Mysteries creators have a plan for his eventual return.

In the penultimate episode of Star Trek: Strange New Worlds, “Not All Who Wander,” Uhura learns that in space, no one can hear you scream. Check out our full recap for more! #StarTrekSNW #StarTrek
https://www.geekgirlauthority.com/star-trek-strange-new-worlds-recap-season-1-ep-9-not-all-who-wander/

Are you a fan of #GravityFalls, #TwinPeaks and graphic novels? Then may we suggest checking our Richard Fairgay's #BlackSandBeach series! Check out our review for the third installment, Have You Seen the Darkness? #BookTwt #BookReview
https://www.geekgirlauthority.com/book-review-black-sand-beach-3-have-you-seen-the-darkness/

Paramount will be bringing the silent RPG #AliceisMissing to the big screen. Check out everything we know so far!
https://www.geekgirlauthority.com/paramount-alice-is-missing-movie/

Get ready for a trip through time. Amazon Studios has released the teaser trailer for the graphic novel #PaperGirls adaptation. #AmazonStudios
https://www.geekgirlauthority.com/amazon-studios-paper-girls-teaser/

THAT TIME I GOT REINCARNATED AS A SLIME THE MOVIE: SCARLET BOND Hits US Theaters Early 2023
https://www.geekgirlauthority.com/that-time-i-got-reincarnated-as-a-slime-the-movie-scarlet-bond-release-date-crunchyroll/