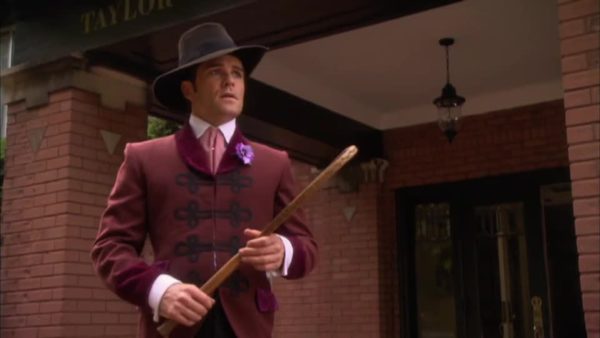 “‘Till Death Do Us Part” drops Murdoch Mysteries viewers into the middle of a wedding. The bride, Eunice McGinty (Waneta Storms) readies herself nervously for the walk down the aisle. While, unbeknownst to the ladies, the men can’t find the groom (Zack Keller). They search the church high and low. However, when the groomsmen finally locate him, he’s dead.

As Inspector Murdoch (Yannick Bisson) arrives, Dr. Julia Ogden (Helene Joy) is already looking over the body. She theorizes that the cause of the victim’s death was likely blunt force trauma. She points to a bruise, showing that the weapon had a distinctive shape. However, she can’t figure out what it is. Inspector Murdoch scans the room, and pulls a cross from the wall. It’s a perfect match. He looks at the weapon in his hand with a wince, “Is nothing sacred these days?”.

Murdoch immediately sets to work. As he begins questioning the many suspects, he discovers that the best man, Lawrence Braxton (Steve Cumyn) was the last person to see Wendell alive. Even more suspiciously, the Reverend (James Gallanders) heard the two men arguing shortly before the murder. Talking with Murdoch, the distraught best man reveals to Murdoch that he had pleaded with Wendell to call off the marriage. When pressed, Braxton admits that the wedding was a contrivance, the couple marrying merely for financial purposes.

This fact is backed up by the victim’s brother Thomas (Joel Keller), who further describes his brother’s lack of financial good sense. He says that his Wendell squandered any money he earned, and it was stipulated in his father’s will that his brother would only inherit his share of the family business when he married.

After conducting the interviews, Murdoch returns to Dr. Ogden. He discovers that the murderer delivered the killing blow from behind. So, either Braxton was surprised by his killer, or he was comfortable enough to turn his back on his murderer. Julia has also discovered another potential complication. She informs Murdoch that Braxton had engaged in sexual relations with a man shortly before arriving at the church. She reveals that the encounter was entirely consensual.

It is this information which shapes the scope of Murdoch’s investigation as he returns to the church with Contstable Crabtree (Jonny Harris). Working with George, he discovers that even with the door closed, the Reverend’s claim that he couldn’t hear the argument was false. He had heard everything, but felt it necessary to protect the members of his clergy.

Murdoch returns to speak with Miss. McGinty. Speaking one on one with the woman, she doesn’t seems surprised at the claim that her husband-to-be had kept a male lover. When pressed for anyone who it might be, she recounts that she had walked into the church and saw her fiancee in a more than familiar embrace with the Reverend.

They’ve seemingly hit a dead-end. With the assistance of Constable Higgins (Lachlan Murdoch) and Inspector Brackenreid (Thomas Craig), Murdoch goes undercover at a get together for members of Toronto’s homosexual scene. Calling himself George Crabtree, Murdoch moves through the group, doing his best to stealthily ask questions. However, his undercover preparation could have been better. One of the men, Jeffrey (Shawn Campbell) looks Murdoch up and down. “That outfit is hardly low-profile. You look like Oscar Wilde. If Oscar Wilde were good looking.” Murdoch lures the man outside, where Crabtree is waiting, and they bring him into the station.

Murdoch attempts to question the man, but it’s to no avail. With some added enthusiasm from Inspector Brackenreid, they discover that Wendell’s lover was not the Reverend. Rather, Jeffrey points his finger back at Braxton.

Returning to the Braxton’s house, Murdoch discovers his now chief suspect hanging from the ceiling.

As Murdoch and Dr. Ogden look over Braxton’s body, we see the first instance of friction between the couple. The series has spend a tremendous amount of time developing Murdoch’s devout Catholicism; while, Dr. Ogden is very much a woman of science. For the entire episode, Murdoch has a difficult time separating himself from his religion. He repeatedly refers to the men as “sodomites”, and is very much a man of his time. Ogden, on the other hand, is progressive beyond her era. She defends desire, and mentions examples of this behavior in the animal kingdom. She snaps, as her frustration with Murdoch builds, “We’re all animals, William.”

The case is finally closed, citing that Braxton had killed his lover, before killing himself out of guilt. However, Detective Murdoch isn’t convinced. He returns to Jeffrey, searching for whatever information he can get.

Murdoch shifts his approach. Since the murder happened before the wedding, the bride-to-be could not inherit her share of Merrick’s money. Questioning Eunice’s former employer, Murdoch discovers that Eunice wasn’t Eunice at all. In fact, her name was Bridget Cline. Eunice McGinty had killed herself six months before.

Murdoch puts everything together at lighting speed. He goes to see Ms. McGinty, catching her right as she’s about to leave Toronto. It turns out Cline is a con-artist. She had met Wendell’s brother Thomas, and the two had orchestrated the con on Wendell. When the brothers squabbled before the wedding, Thomas overreacted, killing his brother. Murdoch finds Thomas in Eunice’s room, unconscious from a heroin overdose.

The episode ends with Murdoch left unsettled. The course of events were, as he describes them, “tragically avoidable”. Finding little solace, he goes to confession in hopes of centering his faith. Murdoch, as the series has developed, is a man caught between a spiritual rock and a hard place. His scientific quest for justice will continue butting heads with his devout Catholicism. It’s a tenant of his character.

Murdoch Mysteries airs Monday night on CBC. While American viewers can watch the first 7 seasons of the Canadian period procedural on Netflix and Hulu.

Keep an Eye Out:

Disney channel (and Canadian television viewers) might recognize Gema Zamprogna in the episode. The actress is probably best known for playing Felicity King on the long-running, period drama Road to Avonlea.