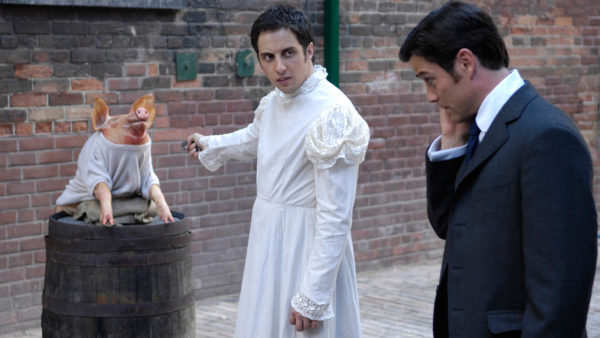 Period series can be a challenge, especially in a contemporary climate. However, the creators of the Canadian mystery series Murdoch Mysteries established early in their first season that they weren’t afraid to tackle the often problematic issues which stem from a focus on history. Racism and sexism are repeatedly addressed in the series, even appearing as early as episode three of the first season.

The case of the week in “The Knockdown” revolves around the death of boxer Amos Robinson (Andrew Hinkson). After winning a match a few hours before, a hotel employee found the man’s body in his room. His wife Frannie (Mariah Inger) stood over his body, a gun in her hand. The murder seems like an easy conviction. However, Detective Murdoch (Yannick Bisson) sees there is more to the case.

One of the main clues around Frannie Robinson’s innocence revolves around the now commonplace question of blood spatter. When she is discovered standing above her husband, her dress is covered in his blood. However, Murdoch quickly realizes that the blood pattern isn’t consistent with Frannie having shot her husband from close range. Rather, it comes from having cradled her husband’s dead body in her lap.

To prove his point, Murdoch conducts an experiment right out of Mythbusters. Constable George Crabtree (Jonny Harris) puts on a white dress, and fires his gun into a recently deceased pig. They then examine the spatter pattern. This scene leads to one of the best lines in the episode, as George turns around, he says, “It’s staring at me sir”. The resulting blood spatter proves Murdoch’s argument. The act of shooting the pig at extremely close range didn’t create the drenching blood spatter which was seen on Frannie’s dress.

The narrative provides a sobering take on racism during this point in history. Early in the episode, as Murdoch instructs Frannie to remove her dress for evidence collection, she immediately asks, “Where do you want me?”, assuming that the Detective wants sexual favors in exchange for her freedom. For much of the episode, Murdoch and Crabtree are alone in their aim to clear Frannie. Even as the story wraps, Inspector Brackenreid (Thomas Craig) admits that he was biased against Frannie due to the color of her skin. It’s a well-crafted and sobering sequence throughout the episode. This has provided the series with a realistic, but still progressive, direction which the writers and creators have kept throughout the 10 season run.

With the aid of Crabtree and Constable Henry Higgins (Lachlan Murdoch) they expose the hotel clerk, who is a primary witness, in a lie. Initially, the man claimed he hadn’t heard the gunshot, and that he had likely mistaken it for a firecracker during the night. Due to the Queen’s birthday, firecrackers were going off outside the hotel repeatedly. Murdoch and the Constables fire off a gun and a firecracker inside the hotel in rapid succession. They discover immediately that the two sounds are nothing alike. Faced with his lie, the man cracks. It had “slipped his mind” that he had left his desk to watch the fireworks. This realization throws the whole timeline into question, further proving the woman’s innocence.

However, the investigation becomes more complicated. During an interview, they uncover an in-depth (almost film noir like) series of subplots, further expanding the already extensive investigation. Amos’ manager had sold his contract to Jeb Cutler (Frank Moore). There are also hushed whispers that Robinson should have thrown the fight.

This episode also sees the groundwork laid for the Murdoch/Dr. Ogden (Helene Joy) relationship, which has remained an important plot point in later years. Meeting in the morgue, they discuss the shot to the heart which killed Robinson. Dr. Ogden says, “It seems amazing to me that something so large and vigorous can be brought down by something so small”. Murdoch’s nerves skyrocket as the two of them drop into a discussion of “sexual selection”. The camera angles are tight, filming the actors in extreme close-ups. The audience has no choice but to watch the earnest, but electric chemistry between the two performers as Murdoch asks, “What of peaceable types, who live in their mind? How do they fare int his great Darwinian struggle?” The Doctor’s responds quickly,  “Some women are attracted to intelligence…”.  She quickly returns to work, nervously pulling herself back from the growing intensity of the conversation.

The Detective soon discovers that the bullet was lightened. Murdoch describes the process as an “old trick”. If you open up a bullet and removed some of the powder, it significantly lessens the noise from the gunshot. At the same time, this kills their established timeline. Frannie could still have killed her husband.

Crabtree calls Murdoch back to the hotel. He has discovered a bloody footprint outside of the Robinson’s room. Dr. Ogden had already determined that the man died instantly. Thus, Robinson could have been killed in one location and then moved back to his room. Could a 120 pound woman have moved a man more than double her weight across carpet? By all appearances, Frannie is once again innocent.

However, further investigation (and a hysterical scene with a ferret) leads the team to discover that the blood trail wasn’t from Amos’ dead body. Rather, Amos’ broken nose left the trail of blood while he was alive.

As the episode comes to a close,  a frustrated Murdoch has a discussion with the Inspector, who encourages the Detective to listen to his intuition. His instinct leads him back to Ozzie Beers (Phillip Jarrett), Robinson’s boxing manager. Beers had also developed a close relationship with Fannie. As Beers fills out a signed confession, Murdoch seems to hand him a (potentially relevant) personal defense argument. Has Ozzie sucked Murdoch into his story? The light loaded bullets discovered earlier mean the murder was planned, as Murdoch reminds the Inspector. Detective Murdoch always gets his man.

Murdoch Mysteries airs Monday nights on CBC. Viewers outside the United States can watch seasons 1-7 on Netflix and Hulu.