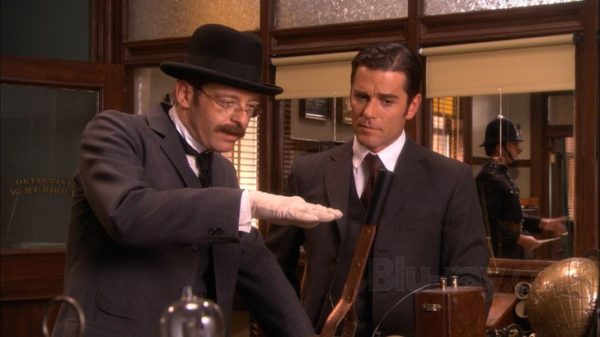 Last week, the 10th season of the long-running, Canadian, mystery series Murdoch Mysteries premiered on CBC. While we wait for Ovation (which airs the series as “The Artful Detective”) to release the U.S. 10th season premiere date, I’m rewatching of the show, starting from the pilot.

As the case moves forward, Murdoch meets his hero, inventor Nikola Tesla (Dmitry Chepovetsky). Meeting for the first time, the characters lay out the in-depth science of the episode. The scene is well crafted, and the treatment of history is smart. The Tesla/Edison feud has been often documented, and the creator’s did their creative research in making the Serbian inventor a suspect.  This awareness of history is especially relevant, as it has become an main part of the Murdoch Mysteries narrative. 10 seasons in, it’s still important to the story-telling.

The investigation proves to be a difficult one. Murdoch must also rule out Edna Garrison (Tamara Hope) as a suspect. The outspoken animal rights activist had been protesting the use of a dog in the experiment. Constable Crabtree who was working security at the protest, was very much on the front-lines of the activity. Crabtree takes a shine to the young woman, actually convincing the dog’s owner, electric engineer Allen Fawkes (Patrick Garrow), to give Edna the dog. The shy scenes between George and Edna give the series a break from the heavy science of the pilot episode; at the same time, letting the audience to get to know the likable Crabtree.

In addition, the relationship between Murdoch and Dr. Ogden seems fully developed, even in the pilot. The two are at the presentation, having packed a picnic lunch for a trip to the park. Bisson and Joy show fast chemistry, and they enjoy working together. In her role as coroner, Dr. Ogden plays an important part in Murdoch’s cases. It is her discovery of the victim’s early pregnancy which focuses his case. Their chemistry is there from day one, and their “will they or won’t they” relationship is very important to the development of the show.

The story is further complicated when one of the main suspects, Daniel Pratt (David Huband) is also killed. Another person of interest, Edwin Dodd (A.C. Peterson), is nearly killed, pointing Murdoch towards a political motive. Could the display have been stopped to sway the city of Toronto towards a move to AC power? However, Miss. Howard also had a complicated romantic past, and a number of the suspects had been linked with her. Could romance have been the motive for the murder?

It is science which cracks the case. With their combined knowledge, Murdoch and Tesla build a wireless recording device. It is thanks to the machine that they catch the killer. Allen Fawkes admits to the murder of Miss. Howard. Her pregnancy would have spelled the end for not only his career, but also for his marriage.

At this time, United States viewers can stream the first seven seasons of Murdoch Mysteries on Hulu and Netflix. Seasons 8 and 9 are available on iTunes, and also on DVD. This is prime time to catch-up while we wait for the season 10 air date.