Movies I Like as Much as (or More Than!) Their Books

I’m a notorious book snob and it’s no secret that most movies based on books disappoint and/or enrage me. I’m rarely excited about upcoming movie adaptations and you can typically find me rolling my eyes at trailers and grumbling about the issues I’ve already spotted.

But! I am not a complete elitist – there are some movie adaptations that I enjoy just as much as their respective books, if not more. 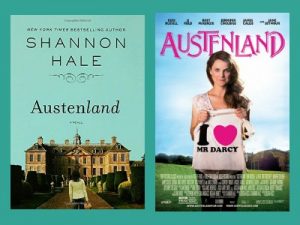 Austenland – I first watched the movie a couple years ago after a recommendation from my mum and sister. I was instantly in love and have watched it an obscene amount of times since. When it was taken from Netflix, I immediately purchased it on Amazon and it has become my comfort movie.

I read the book last year and loved it as well. I knew it was going to be different than the movie and there are some fairly large differences – mostly Jane’s reason for visiting Austenland and the ending. I liked how neurotic Jane was in the book and the end scene more than the movie. But the movie fleshes out the side characters wonderfully (especially Miss Charming) and I think it was perfectly cast. Also, it’s hilarious.

Watching the movie after having read the book, I loved being able to see an interpretation of Austenland and could better picture myself there because of it. While I think the movie could have easily stuck to the plot of the book, I liked that this adaptation had differences. I love the book and movie equally and together they combine to create this fabulous world in my head. 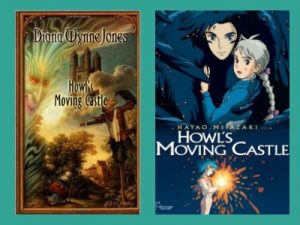 Howl’s Moving Castle – Another instance where I saw the movie first because I had no idea this was a book! This is my favorite Studio Ghibli movie (though Spirited Away is a close second) and once I found it was a book, I had to read it.

I’ll be honest, it’s been so many years since I’ve read the book, I’ve lost a lot of the details (come on, this must happen to other people right?!), but I do recall there were some significant differences in the plot. However, I still found the book to be magical and delightful and it didn’t lessen my love for the movie. As with Austenland, the movie helped me create visuals for the book. Hopefully, I’ll re-read the book and its sequels soon (she said, about every book ever). 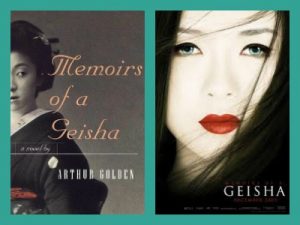 Memoirs of a Geisha – Once again, this is a book I haven’t read in years, so my memory of the details is fuzzy (gee, maybe I should have studied up on this stuff first), but I recall loving it. It was one of the few historical fiction books I’d read at the time (which was at some point in high school) that was set in Asia.

I was excited to see the movie (and I love the cast) and from what I remember, they did a decent job of touching on most of the major plot points of the movie. I’m sure, as always, changes were made, but I don’t recall being mad about anything. I find the film itself beautifully done, regardless of whether it’s an adaptation. 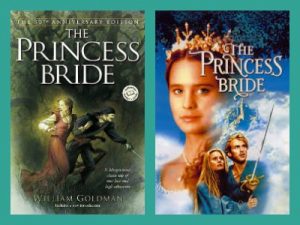 Boy, did that book troll the hell outta me. I am apparently more gullible than I thought and did not unravel all the bulls**t until close to the end. It was a lot of fun, actually, despite how stupid I felt. There’s an added level of comedy from the book that I wasn’t expecting, despite how funny the film is. 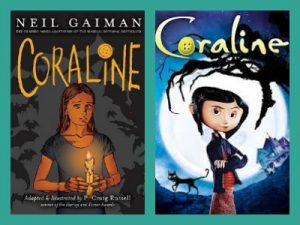 Coraline – My appreciation for Gaiman’s work has grown over the past few years, but I’ve been aware of his work since late grade school. I figured Coraline would be right up my alley, but I didn’t love the book, sadly. I thought it was odd, but it didn’t grip me in any way.

The movie, however, is friggen fantastic! It’s one of the movies I watch frequently and Laika studios did an amazing job. I actually prefer the movie to the book. Why? I don’t know! It’s been a million years since I read the book; I just know I didn’t like it. The movie is creepy and funny and beautiful to look at and you should watch it if you haven’t yet. 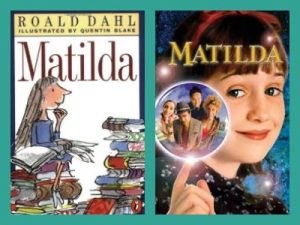 Matilda – This is another movie I grew up with. A little girl that reads voraciously at an insanely young age and is also a telepath? Right up my alley! I love that the movie manages to be dark and silly at the same time. Much like Dahl’s work, but I didn’t know that because I only read the book two years ago!

Gasp! I know. I’m a cretin. I’ve only read three Dahl books (but you can beat me up for that another day) and Matilda is now one of them. I was instantly (if not stupidly) surprised to find that Book Matilda is English. I think the movie did a great job of capturing how vile Dahl portrays his adults while still keeping the lighter, sillier moments. 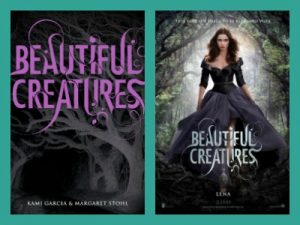 Beautiful Creatures – I watched this movie because it was on TV and I was bored – it’s the outlier of this list because I don’t really like the movie all that much, though it’s not terrible. It’s the movie equivalent of a fluffy YA read: something quick you can watch without paying much attention, but entertaining enough not to be a waste of time (ok, I don’t know that I’ve actually found a YA book that did that for me, but I know they exist for others).

I liked the southern gothic feel and that there was a boy swooning over a girl (not being a big YA reader, this seemed new to me) with magical powers and it had Jeremy Irons and Emmy Rossum so I was happy. I figured I’d check out the book, because if the movie was half decent, I assumed (oops) that the book would be pretty good.

Well, I was wrong; I really didn’t like the book. I preferred the casting of the characters from the movie, both in appearance and personality. The main plot was even sillier and more dramatic than in the movie and it actually made me appreciate the movie a little more. I wouldn’t really recommend either, but I would advise you to watch the movie over the book if you had to pick one.

The underlying theme here is that I might enjoy movies based on books if I see the movie before reading the book. However, there are at least a couple instances where I have read and loved a book before seeing its movie adaptation and still enjoyed the adaptation.

RELATED: Six Studio Ghibli Films Are Coming Back to Theaters

For more of my Geek Girl Authority posts, click here!