Movie Review – WELCOME TO ME

Kristen Wiig plays the title character, Alice, a woman living with Borderline Personality Disorder who wins the lottery, the BIG one – $86 Million. Alice is a fervent watcher of videotapes of “The Oprah Winfrey Show” and decides to use her money to fund and host a vanity TV project. 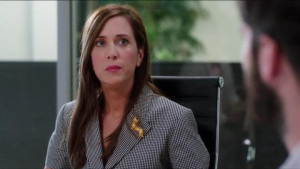 What follows isn’t an examination of BDP as a disease or a haven’t-gone-there-yet dig into the shallow workings of ratings-whore TV stations or even a slapstick take on celebrity. None of these elements are explored and numerous more are underutilized and what we get instead is Kristen Wiig acting strange on her TV show, which proves to be not enough, unless that TV show is “Saturday Night Live”.

Alice is a tough character to get behind. She’s constantly saying things that make the other characters around her uncomfortable, things that make me like her less. She somehow has a best friend, Gina, who she also alienates at one point. I’m not sure how Alice got this friend, as irritating as she is. And at the risk of repeating myself, their relationship isn’t fleshed out enough and it’s resolved with a solution Gina very clearly stated she didn’t want to be a part of. 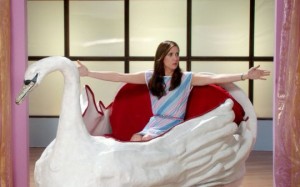 So, on what scenes does “Welcome to Me” spend a lot of its time? The TV show. Alice wants to host a show that’s all about herself, so it’s filled with re-enactment scenes about people in high school who hurt her and live call-ins from her family members and some segments just ‘cause she wants them, like live spaying and neutering of dogs. Just. ‘Cause. Wiig floats around the soundstage, being wispy and odd, but it really doesn’t add up to much. It’s not an over-the-top “Truman Show”-type movie with much to say about television, it’s not a character breaking down before us, covered with humor. It’s just those scenes…being…strange, and again, those scenes are built as if the makers thought that would be plenty of movie for you. It’s not. Sadly, the worst part of the movie is what we get the most of, and the parts with most potential are thin.

Is Alice’s $86 Million corrupting her? Maybe that’s what this is all about? I don’t believe it, because Alice is rather impenetrable, swinging in no direction emotionally from scene to scene. Even when she wins the lottery, she notices her numbers match the winning numbers, makes a call, and then is seen accepting a check, acting and saying something strange. 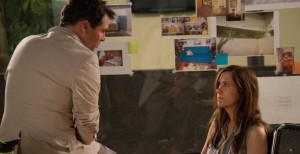 The supporting cast gives it a good go, with Linda Cardellini faring best as Gina. She’s having a good summer other than being in this, and I can recommend the TV series “Bloodline” on NetFlix as well as catching her jump into the Marvel universe in “Avengers: Age of Ultron”.

Speaking of watching things other than this, the idea of taking a close look at someone who is emotionally underdeveloped was more entertaining and thoughtful in a movie like “Being There”, and a searing look at the media was more effective in “Network”.

Adam McKay has his name on “Welcome to Me” as executive producer. I’ve seen a lot of McKay’s stage work in Chicago back in the ‘90s and he has much more to say about everything than this movie says. Chances are McKay wasn’t involved here from the ground floor. I wish he was.