After seeing the rousing trailer for director Angelina Jolie’s Unbroken, and examining the amazing life journey of Louis “Louie” Zamperini, one could only look forward to something extremely rare and special. Unfortunately, what has been delivered is a prestigious looking package that is nearly void of all the power and soul of Zamperini’s life story. And it is hard to tell where the blame lies. Is it possible that four Oscar-nominated screenwriters which include Joel and Ethan Cohen, were part of the problem or was director Jolie far more interested in delivering the look of an “Oscar”-type nominated film rather than giving us the depth of one, or was it hampered by studio interference? 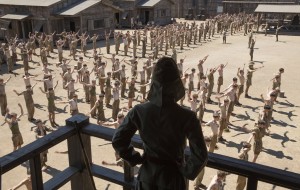 We may never know unless we get a director’s cut. But it’s hard to imagine that Jolie’s Unbroken could offer much more than it delivered. The story screams for the kind of treatment that was given to such classics as David Lean’s “Bridge on the River Kwai,” Billy Wilder’s “Stalag 17” and even Spielberg’s much underrated “Empire of the Sun”. But not once does the film stir our emotions as the films mentioned or give us characters as rich as as those we have come to expect from such material. Even the musical score supplied by Oscar-nominated Alexander Desplat fails to soar or be memorable.

Zamperini’s life story is worthy of a five star HBO mini-series rather being crammed into a two hour movie, or if one wanted to encompass a piece of this man, perhaps what might have worked better was to concentrate on the man rather than the most harrowing events in his life. Zamperini was born in 1917 in New York to Italian immigrants. Growing up, he and his family spoke Italian and Zamperini was bullied for being different. His older brother helped him retaliate by teaching him how to box, and the younger Zamperini looked forward to beating up each and every challenger to the point of being “addicted” to it. 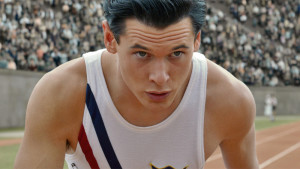 The older brother got him into the high school track team to curb his ways, and Louis excelled physically, mentally while maturing into an amazing track star that would break records and go onto the Olympics. His Olympic career is rife with high drama as well, including meeting Hitler and subsequently climbing a flag pole in 1936 and stealing Hitler’s personal flag. He continued his illustrious track career in college and later enlisted in the U.S. Airfare in 1941 as a bombardier facing heart-racing action along with his comrades in arms.

But barely any of this is touched upon in Jolie’s film. It is the unfortunate crashing of his bomber into the ocean, surviving at sea for 47 days and being captured by the Japanese that becomes the main crux of the movie. This does provide plenty of opportunity for breathtaking drama, but it all feels surface. Shots are composed beautifully, actors give us the best they can deliver under the circumstances, but none of it stirs the heart. 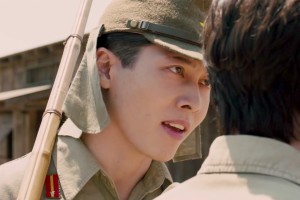 The harrowing war of wills between Zamperini and his captor, the infamous war criminal Mutsuhiro “Bird” Watanabe, was the stuff movies are made for. “Bird” ran his cruel prison camp like a cool mad dog and Zamperini was the bone he was determined to gnaw until the man was gone. Zamperini’s trials and tribulations are horrendous, but the man perseveres, even transferring to another prison camp and ending up with the same monster again. But this battle is a by-the-book prisoner of war tale that rarely moves us. It’s unbelievable to know this was a true story, but one cannot help but check the time waiting for it all to end.

(SPOILER – if you have not read up on the man) After Zamperini is released from the prison camp, the rest of his remarkable life is encapsulated in a few title crawls. This gives off a near footnote effect on a life that is well worth a better treatment than what was delivered. To be perfectly honest, I nearly dozed off a couple of times. The only accomplishment here was making a 137 minute film feel much longer than the entire “Hobbit” series and far less interesting.