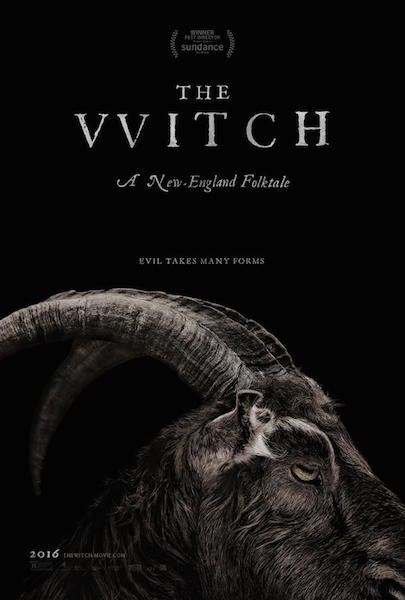 A BONE-CHILLING DESCENT INTO MADNESS AND HORROR

You could hear a pin drop after the lights came back on at the press screening of writer/director Robert Eggers’ “The Witch”, (stylized as “The VVitch”) and perhaps a sigh of relief, knowing we were all still safe while attempting to reassure ourselves, it’s only a movie. What a powerhouse of a film depicting life in New England circa early 1600s with the unsettling whispers of witches, possession, and sacrifice with visuals and sound the likes of which we’ve not seen nor heard since the days of Stanley Kubrick and Ken Russell. With a story and some dialogue taken from actual accounts, “The Witch” begins an unsettling spiral into unspeakable terror. 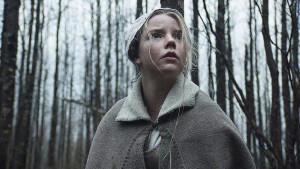 For those looking for the latest cheap scare and/or body count, this is not the film for you. Writer/director Eggers has crafted a deliberately slow potboiler. He wants you to take in every nuance, because it is through those quiet moments that the horror gains momentum and the shocks hit you like a battering ram. The film is a thought-provoking folktale that gives us a very realistic peek into the life of settlers, their struggles, reserve, strong beliefs, and how it is all put to the test once confronted with an unimaginable sinful entity.

A family of six settlers are ousted from their village, and they travel far until they find what they consider the promise of a gift from God, a quiet meadow with a dense forest background. What they see, and what we are privy to, are totally different visions. There is hope in their hearts with the promise of providence, but what is actually depicted is an unearthly malevolence looming over them. The very trees appear as pillars of evil, and even the sounds emanating from the forest give us a cause to fear. 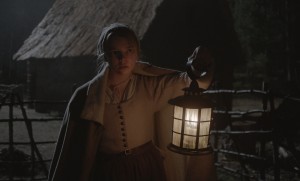 After they establish their home with crops and the essentials that nature provides, we realize that it will take more than their sheer fortitude to survive not only in the wilderness, but amongst each other. The couple’s children are a handful with a daughter, Thomasin, that may be entering puberty, her slightly younger brother, Caleb, fighting off sinful thoughts, even younger mischievous fraternal twins, Jonas and Mercy, that have a propensity for teasing the farm animals, and a baby. It is this dynamic that is played out and carefully edged into horrific situations that provides the tremendous power of this film.

Under the eldest daughter’s watchful eye, the baby is kidnapped. Snatched like a leaf in the wind. Thomasin is not even afforded a glimpse of the culprit. The only sign, a slight movement beyond the brush and into the woods where we can hear the faint cry of the child. What takes place afterwards may chase some out of the theater. That’s all I dare say. Except, nothing gets as gruesome as what we witness from that point. But it’ll run your blood cold and sets a very dark tone leaving you with baited breath. 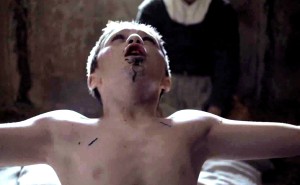 That one catastrophic moment for the family slowly tears them apart. Watching the accusations fly, the testing of their beliefs and wills, and what lurks in the forest keeps us glued to the screen, hoping against hope that we’ll find a point where we can breathe easier. But writer/director Eggers merely mounts the tension with each passing unholy moment. There are subtle scenes of innocence that are eventually ripped to shreds with unnerving wickedness. To say much more would be a disservice to the film’s surprises.

Cast and crew are to be commended. As good as the cast is, it is the children that are the real stand-outs. Anya Taylor-Joy as Thomasin is heart-wrenchingly innocent and confused as to the events befallen her, and the same could be said for young Harvey Scrimshaw as Caleb. They play off each other beautifully, while the twins, played by Lucas Dawson and Ellie Grainger, are a mixed bag of joyous mischievous children that toy with strange tales of witches and the devil that eventually gives cause to question their antics. Just the games they develop with their goat “Black Phillip” rattled my nerves. 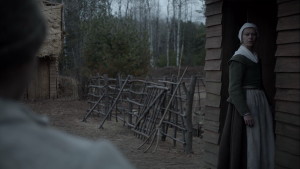 Once every blue moon (or in this case blood red moon) we get a “Rosemary’s Baby”, “The Exorcist” or “Anti-Christ”. A movie so unnerving it is either repelled or embraced for its depiction of a malevolence rarely seen. Robert Eggers’ “The VVitch” steps into that elite pantheon of dread and darkness without compromise. It dances with the devil, and with a wicked smile invites you to join in. The only question is; do you have the courage?