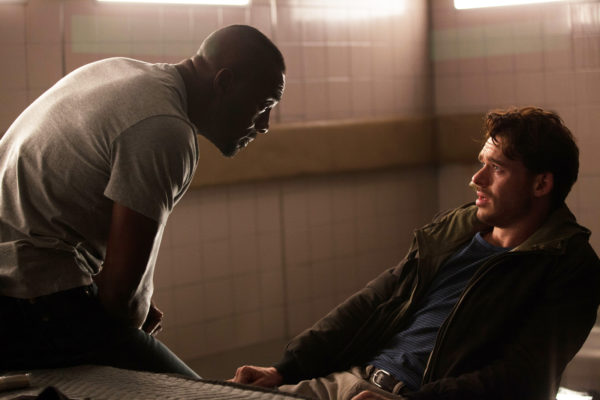 Does The Take not sound familiar? It’s very likely. The European action film started life as Bastille Day; however, the narrative has proven to be entirely too timely. After hitting various release snags (namely the Bastille Day attacks in Nice, France), the film had a name change, and released to no fanfare in the United States on November 18th.

The Take follows thief Michael Mason (Richard Madden), who unwittingly pickpockets reluctant bomber (Charlotte Le Bon). When the package explodes, he finds himself in the sights of not only the French authorities, but also the CIA. He must work with American agent Sean Briar (Idris Elba) to not only clear his name, but bring down the crooked French authorities who orchestrated the bombing.

The film’s difficulty in finding a release is unfortunate, as it is a solid action film. It comes from director James Watkins, and is very munch in the same vein as The Bourne Identity, Taken and The Transporter. With a marketing push, this movie could have found an audience.

The strength of the film most definitely stems from its’ performances. Idris Elba is a solid and consistent performer in everything he touches. And Richard Madden, despite a powerful run as Robb Stark in Game of Thrones, and his recent turn as the Prince in Disney’s Cinderella remake, is still a relative newcomer to Hollywood. Working together, the two men achieve a stellar chemistry in their scenes together. Both performers shine. They not only handle the pressure of working outside of their usual accents, but also achieve great tone and pacing with the quippy dialogue.

The biggest flaw in the film is a common one in cinema. The film’s narrative, which involves a crooked group of French police officers orchestrating a bombing to rob the French Federal Reserve, is relatively thin. Outside of the film’s leads, the characters have a difficult time standing out. They have little motivation, outside of just being the bad guys. Many even fall into the role of simply being numbered thugs for the protagonist to take out.

Another place the film impresses is in the action sequences. The creative team resists the urge to overuse the shaky cam. Which has been an all too common problem in the post Bourne era. The shaky cam is used for effect, but doesn’t detract from the fight scenes. There’s a particularly impressive chase scene over the rooftops of Paris, and the absence of over-editing allows audiences to not only feel the action, but also revel in the stunning settings. As director, Watkins reaches a solid combination between shooting and editing.

For all those rooting for Idris Elba to be James Bond, check out this film. The actor kicks literal butt in the action scenes, and singlehandedly proves why so many people think he could be the next 007. His Sean Briar is rebellious, insubordinate and almost reckless. While it’s anyone’s guess who the next James Bond will be, Idris Elba would not disappoint in the role.

It’s a real shame that The Take has been dropped as quickly as it has. The film will appeal to fans of not only its’ two main protagonists, but also those of films like Taken. Check your local listings for the nearest theater playing this limited release.